After getting great looks of the Yellow-throated Warbler in Frankfort (see previous post) I drove up into Michigan's "pinky" and into Sleeping Bear Dunes, hoping to find the pair of Red-necked Grebes that had been hanging out in Sleeping Bear Bay all winter.

I arrived before Mike and Ross so I scanned the open waters of the bay for birds. All I saw were a couple heads bobbing in the waves to the west, so I struck out that way to get a closer look. It was windier here than I had hoped, with the northeast wind clearing Pyramid Point enough to ruffle the water. I shouldered my scope and started walking.

I got within sight of the waterfowl which turned out to be a handful of Bufflehead. I scanned the bay again but didn't see anything close enough to ID. I was now about halfway to Sleeping Bear Point so I decided to keep walking until I could see around it--after being relatively cooped up all winter it felt good to stretch my legs.

The lakeshore was without snow and fairly ice-free--the only reason grebes were even possible in the bay. But on shore every log and shrub was coated with frozen spray and run-off, and the beach was a layer cake of ice and sand. 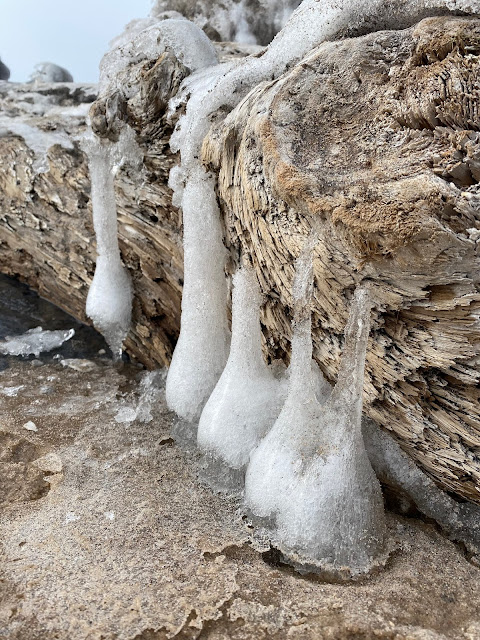 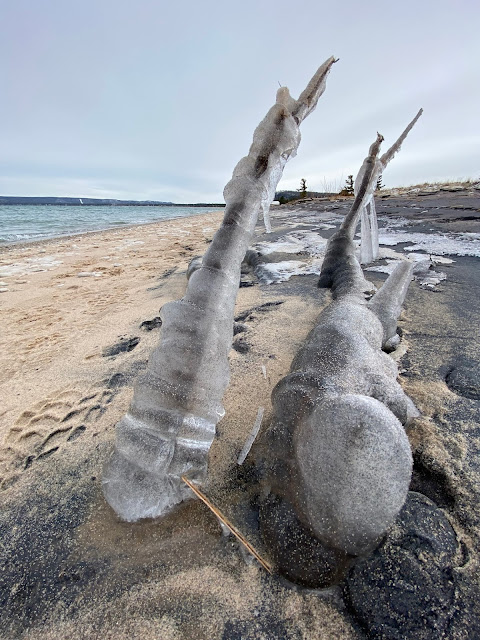 The beach here is still substantial but much less that it's been in years past. The Great Lakes are still very high and erosion has been an issue all around the lakes. A few spots along the beach had steep sand cliffs a couple feet tall with just a foot or two of flat sand and ice upon which to walk along the shore. The stark beauty of the winter beach was captivating. 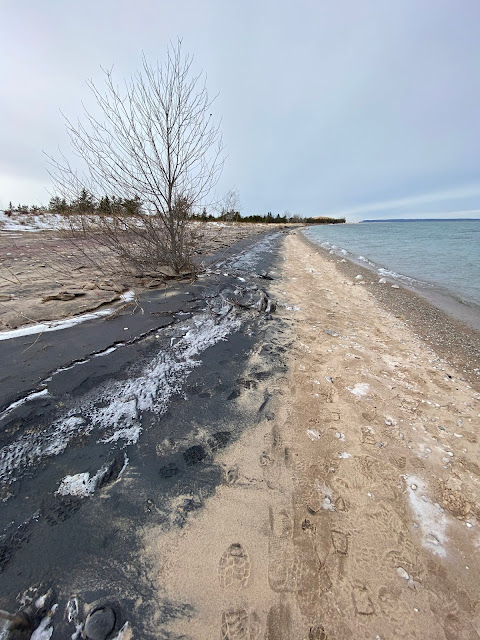 The sun tried to poke through the clouds, but it gave no warmth. Snow was pushing up from the south and the edges of the storm blurred the sun. 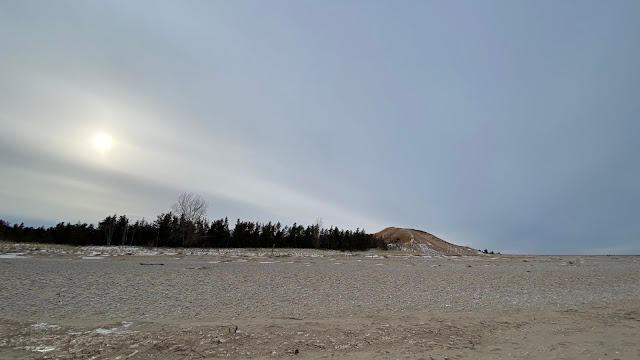 On my way back from the point I saw a couple birders with scopes looking out over the water. As I neared I could see it was Mike and Ross along with another couple. They had not found our grebes either but had seen me down the beach. We decided to move east to Glen Arbor to see what we could from there.

Being around the curve of the bay gave the beach in Glen Arbor just enough shelter to keep the wind down. We found lots of mergansers, and Mike saw Long-tailed Ducks far out in the bay, but still no grebes. It was starting to get late but I decided to move east around the bay to get a better look at the waterfowl we could see but not ID.

Around the bay towards Pyramid Point there was even less wind. I scanned the waters but saw nothing but goldeneye and mergansers. There were hundreds of birds in the bay but I did not see any grebes. It was a disappointment after the success of seeing the warbler earlier that day. Checking the eBird reports for bay tonight I saw someone had seen the grebes around 1:30 this afternoon, a couple hours before I arrived, hanging out with Long-tailed Ducks. 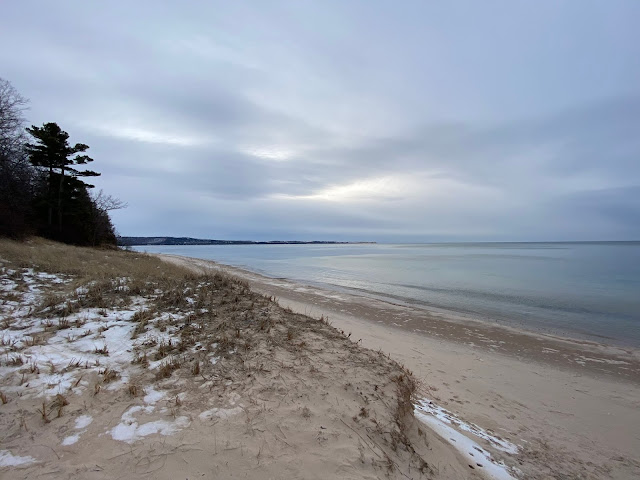 This morning I was working on my journal, sitting at the dining table, when all of a sudden the couple dozen Blue Jays at the feeders let a whoop and took to the air in unison, along with all the other birds. The jays are often playing pranks and sending out false alarm calls, but this sounded different--more urgent. I assumed there was a hawk and got up to take a look. Sure enough, a young Sharp-shinned Hawk sat in the willow between the driveway and the feeders. I managed to get some photos of it in the willow, then it flew up into an oak. I ran upstairs and got a few more shots before it flew off. This was quite a treat as this bird is not common here this time of year, and to get such good looks at it made it even better. They can be hard to tell apart from Cooper's Hawks, so to get good identifying shots was nice. I think these are also my first "sharpie" photos, period.

Earlier in the morning I had finally seen a Red-breasted Nuthatch, who clearly favors the feeders at Lori's house over ours, as I have yet to see it here this year--and we're only a couple hundred feet apart! 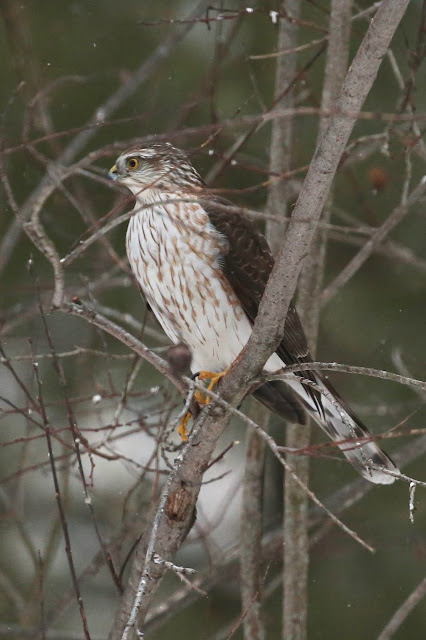 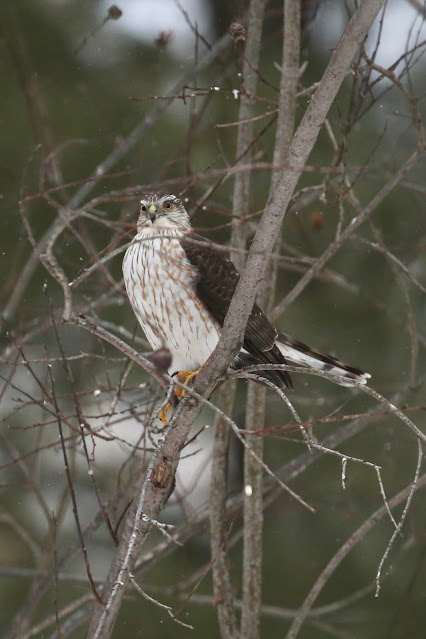 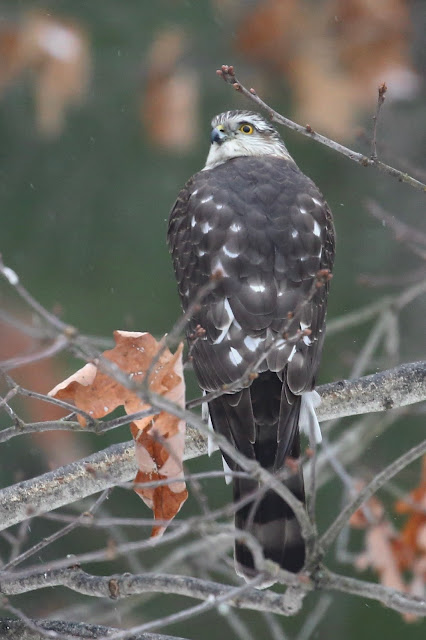