The first several trips I took in search of birds for my Big Year were forays into the field tied to other errands, which helped ease my guilt over driving all over the place to look for birds. My trip to Reeds Lake was done as a side trip to Lori's doctor's visit, at a facility a half mile from the lake. On January 8th, we combined a trip to Costco on the west side of Grand Rapids to a hunt for a Smew, a Eurasian merganser that had been reported on Allegan Lake, about 20 minutes farther south.
As with so many rarities, we found the Smew thanks to the group of birders already there with scopes and binoculars. At first it was hidden behind a dock, but came out within minutes, and I took some photos with my iPhone and scope (digiscoping). It is a species that is often purchased and bred by bird fanciers, and it is likely this is a bird that escaped from a collector rather than one that got here of it's own accord. If I was doing some sort of a formal list that would matter, but in this case I'm not going to sweat it too much. I also added Bonaparte's Gull at the lake, and an American Kestrel on a wire along Fruit Ridge Ave on the way home.
January 9th was the coldest day of the season (9°!), so we stayed home with fires blazing in the wood stoves. I wondered how the cold temps would affect the lakes in the area--one of the reasons we were able to see birds like the Smew is because it's been relatively warm here so far this winter. While highs in the 30's and lows in the 20's don't sound all that warm, it's still 5° to 10° above average for January, and it's been enough to keep lakes, most rivers, and even the shoreline and bays of Lake Michigan mostly ice free.
By January 10th the weather had warmed, and I had been alerted by a friend of a flock of Bohemian Waxwings--a totally new bird for me, one I'd been wanting to see for years--in the Pigeon River Country of Northeast Michigan. I think she was out looking for one of the elk herds the Vanderbilt area is famous for but found birds instead. Upon checking eBird I saw that this was near Inspiration Point, a known spot for waxwings as well as Pine Grosbeak, another not-so-easy-to-find Michigan bird. It was a three hour drive, but Grayling was right on the way, and I needed to restock prints at the AuSable Artisan Village, a gallery I had just rejoined in the fall. It was the perfect excuse to go look for birds.
After many detours and the GPS taking us down Forest Service two-tracks, or trying to take us down roads that literally no longer existed, we finally found the spot. I slowed as we neared the road for Inspiration Point because I could see birds flying all over the place. Across the road was a pullout, and I stopped before we reached it to get my gear and put some spikes on my boots, and there by the side of the road was a Pine Grosbeak, calling from a tree right next to the car. I pulled up into the turnout and saw the area lined with crabapple trees, still with fruit, and they were FULL of birds.
I parked the car near one tree and got out and stood in the open with my camera. The birds could not have cared less. They moved from tree to tree, eventually landing right next to the car where Lori had a clear view.  They flew overhead and I could hear the sound of their wings.
This was only my second time seeing Pine Grosbeak, and I was able to get much better photos this time around (though I'd still like better). They are such gorgeous finches in raspberry and terra cotta, with those bold wingbars and blue-gray backs.

But the show stopper for me was the big flock of Bohemian Waxwings. In most places in Lower Michigan one sees Bohemian Waxwing as an individual or two mixed in with a flock of Cedar Waxwing. To find a flock of nothing but Bohemians was a bit overwhelming. I didn't know where to look, but settled on birds that were next to the car as the lighting was better for photos. 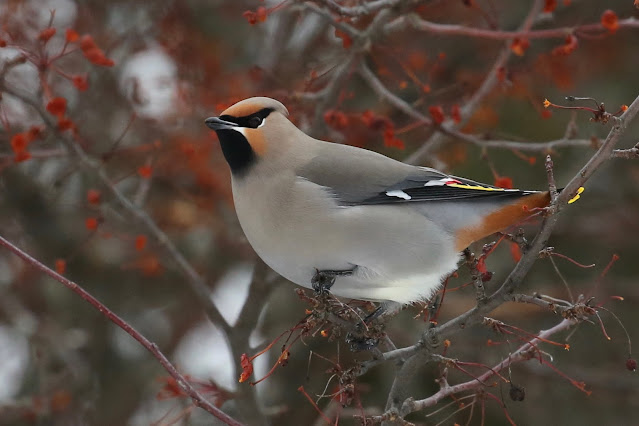 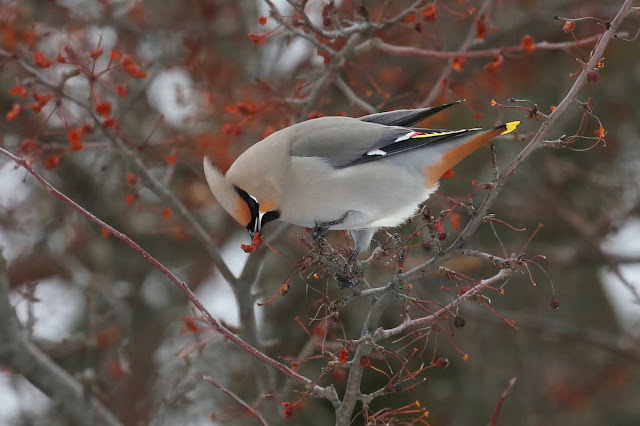 These birds are distinguished from the Cedars by their overall gray appearance (Cedars are more yellow and brown), the rufous on the undertail coverts (Cedars are white), and the yellow and white tips on the flight feathers which make the zig-zag stripe down the wing. 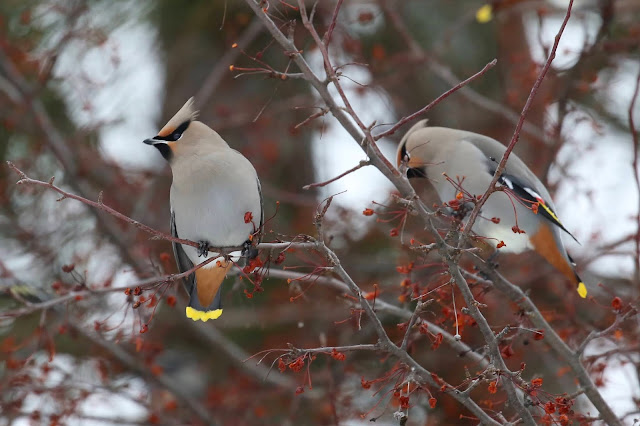 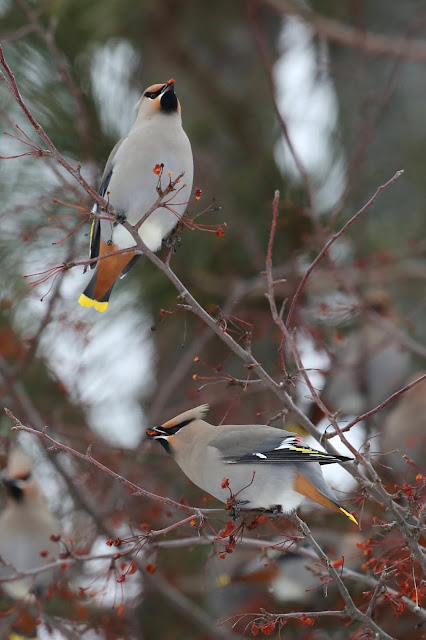 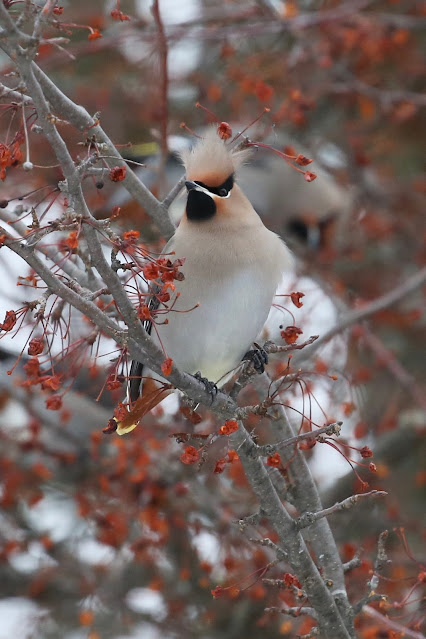 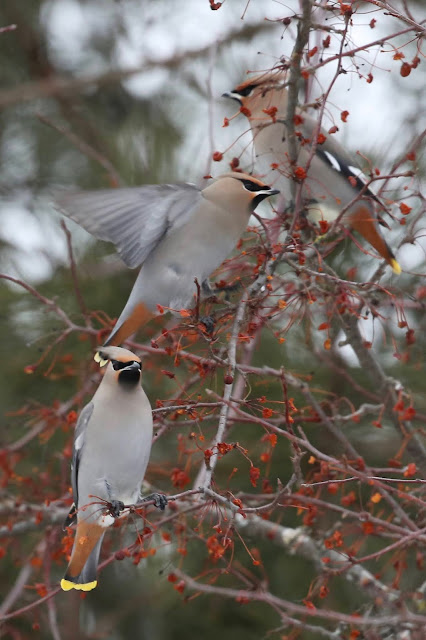 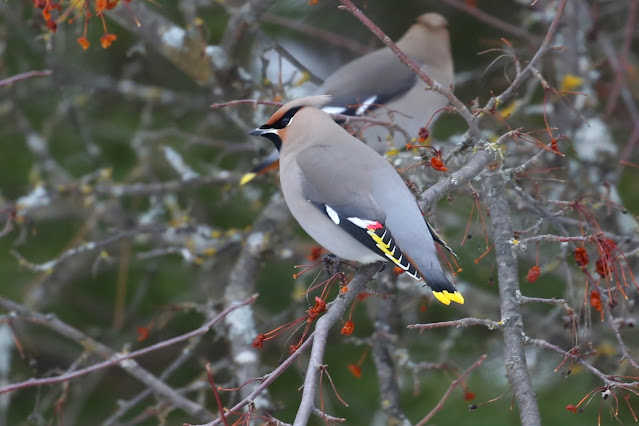 I was gobsmaked watching these stunning birds, and if they hadn't flown off after about 15 minutes I might not have ever left. Last word I had (January 30th) is that the trees are now bare and birds have moved on.

As we turned and headed for home (this time on actual, plowed roads!) we saw a Ruffed Grouse fly across the road. A moment later I realized there were several birds along the road near a little wetland where there were also crabapples. I tried stopping quickly and the anti-lock brakes kicked in, grinding and crunching and not really stopping us, even though I was only going about 10 miles an hour. We finally came to rest about 40 feet away, and I managed a few photos before the birds spooked and flew into the woods. 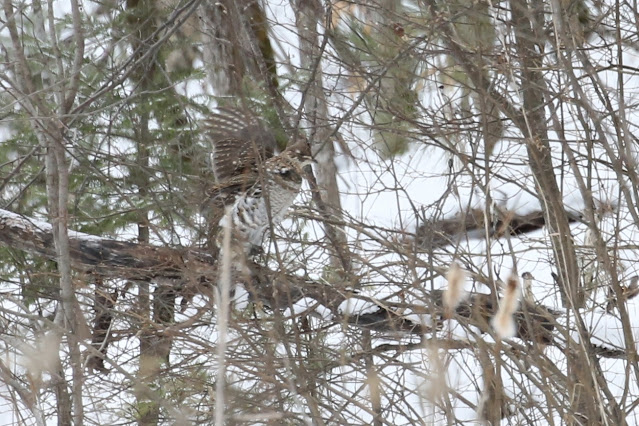 We ended the day with three new species for the year, one lifer, and a boat-load of photographs. There were at least 50 waxwings in the flock and another 20 grosbeaks, and we counted seven grouse in the covey. Well worth the three hour drive!
Allegan Lake, Jan. 8
48) Smew (lifer)
49) Bonaparte's Gull
50) American Kestrel
Inspiration Point, Jan. 10
51) Pine Grosbeak
52) Bohemian Waxwing (lifer)
53) Ruffed Grouse
Posted by Marie at 2:44 PM No comments:

January 6th, 2021
Over the previous few days I added an odd assortment of birds to my list. On January 4th I dipped on some new ducks at Reed's Lake in Grand Rapids, only picking up Canada Goose. At home on January 5th I added Carolina Wren, who I heard singing on my way to the office at home. That evening we went back to Walkinshaw so Lori could see the owls, and saw a Northern Shrike for bird #42.
On the 6th Lisa and I planned another birding day. It was to be sunny for the first time in weeks, and a breeze from the east meant off-shore winds on Lake Michigan. Thanks to social media, What's App, and email alerts from eBird, I knew there were some birds on the coast that I needed. We had planned to go to Holland to look for a Purple Sandpiper we'd seen in December, but now needed for 2021, along with hopefully a scoter or some other rarity hanging out along the pier.
On the way we stopped at the Muskegon Wastewater Facility. Yes, birders spend a lot of time at sewage treatment plants--some of the best birding in Florida is at wetlands that serve as filters for treated wastewater. MWW is known for Snowy Owls, a bird I'd seen and photographed in December but needed for 2021. When we arrived she was far out on the ice, but that's all I need for her to count. I also picked up Hoary Redpoll, a very uncommon finch from the north, mixed in with a large flock of  slightly less rare Common Redpolls. I also added Gadwall, for bird #45.
Since we were so close, we decided to check out Pere Marquette Park in Muskegon before driving to Holland. I'd seen reports off and on of Purple Sandpiper there, and any river mouth/pier could be good for all kinds of waterfowl. Lake Michigan was placid, a rarity in early January, and because the winter has been mild the big lake was not frozen. Ice coated some of the rocks along the pier but it was walkable all the way to the end.
Long-tailed Ducks, one of the cutest waterfowl, were diving among the rocks along the pier. I studied the ducks in the channel and along the north pier but didn't see anything unusual.

While I was taking some photos of the lighthouse I saw movement among the boulders, and was delighted to find not one but THREE Purple Sandpipers. What an incredible gift! I had my little Panasonic camera with me and got some decent shots, then decided to go back to the car to get my DSLR. I could not pass up the opportunity to capture these rare vagrants, usually only seen along the Atlantic and Pacific coasts.

The sun graciously went behind some clouds, giving me good light for some wonderful shots. I just sat down on a boulder and let the birds work around me. They showed little fear of me or others walking past--they nest on the tundra and had probably never seen people before! 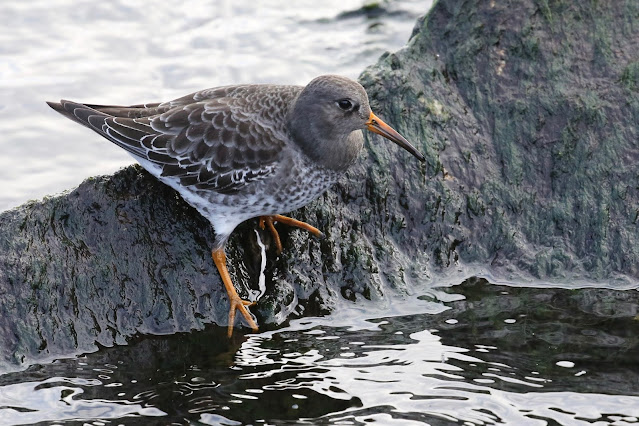 They worked the rocks at the waterline, picking bits out of the algae.  They did not mind a gentle wave washing around them, so different from so many other shorebirds I've watched who seem to avoid the water as much as possible. At one point a wave engulfed one of the birds, and it seemed totally unfazed. Their behavior reminded me of the American Dipper, a songbird that feeds on the bottom of cold, fast rivers and streams out west (no, really--look it up!). 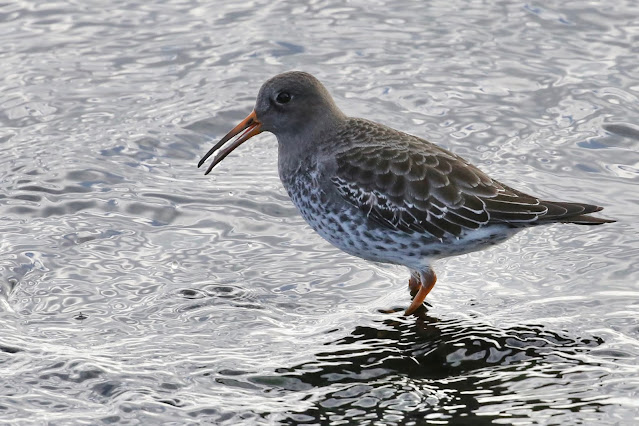 I was so delighted to finally see this species up close that I'm sure I overdid it on the photos, but such is the luxury of digital photography. The light was fantastic, the subject willing, and I had time to spare. When it comes to birders, are critical of photographers, thinking them just out to get a good shot, not caring all that much for the well-being of their subjects. I find that disingenuous. Yes, some do unethical things (like baiting owls with mice) but that is not most photographers. For me, watching a bird through my camera lens is no different than watching through a scope or binoculars, and there's a added sense of excitement when I think I've gotten a great pose or caught the bird doing something interesting. 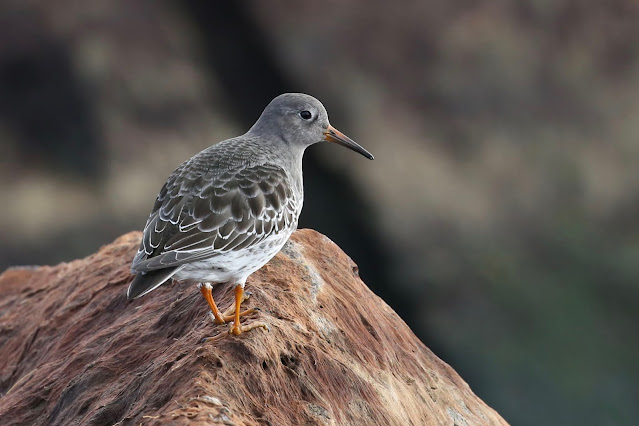 Scanning the channel I finally found a Black Scoter for bird #47, but it was too distant for any decent photos.