Thursday dawned as clear and bright as the first two days on the island, and after breakfast Liz and I took a short boat trip to Minong Island to do some painting at the Stack cottage. What an amazing place that was (but for some reason I did not get any pictures!). The house sits on the very tip of the island (see map below) and has amazing views of the end of Tobin Harbor and the great expanse of Lake Superior beyond. It is a castle compared to the other dwellings on the island--huge living room, three sizable bedrooms and a great big kitchen. The whole place is full of big windows, with a whole wall of them on the east side, and a covered porch off the kitchen. It would be an amazing place for the Artist-in-Residence, except for two things--it's on an island, so one could easily be cut off for days in bad weather, and there are no pit toilets, due to the thinness of the soil on Minong. That means chemical toilets only, which require more care, and I suppose they don't trust folks to take care of them properly.

Liz and I worked on one of the two outhouses behind the cottage. Before we arrived the roofs had been removed, and while we scraped and painted the exterior on one outhouse, a few of the guys were busy replacing the roof on the second outhouse. The interior was empty, its floor having rotted out some time ago, but there was still a roll of tissue hanging inside, under this really cute folk art fish. We did not touch the interior.

Friday, our third full day on the island, was our day off. Mary and I had decided to take a hike into Rock Harbor, maybe take showers, get some lunch, and do a little shopping at the gift store. It was another glorious day, and we were on the trail by 9 am.


Zack and Liz decided to spend their day off hiking from Daisy Farm, where they were dropped off, up to Mt. Franklin and back to Dassler, a jaunt of about 12 miles. That seemed much too ambitious for me, although I would undertake a similar hike later on.


The views from the Stoll Memorial Trail, which runs from Rock Harbor to Scoville Point along the south side of the peninsula, were just stunning. Every view of the water and landscape was magical.

We stopped a lot to watch birds and examine flowers. It took us over two hours to hike the two miles to Rock Harbor!

The whole hike was pure eye candy. I wanted to melt into the scenery. 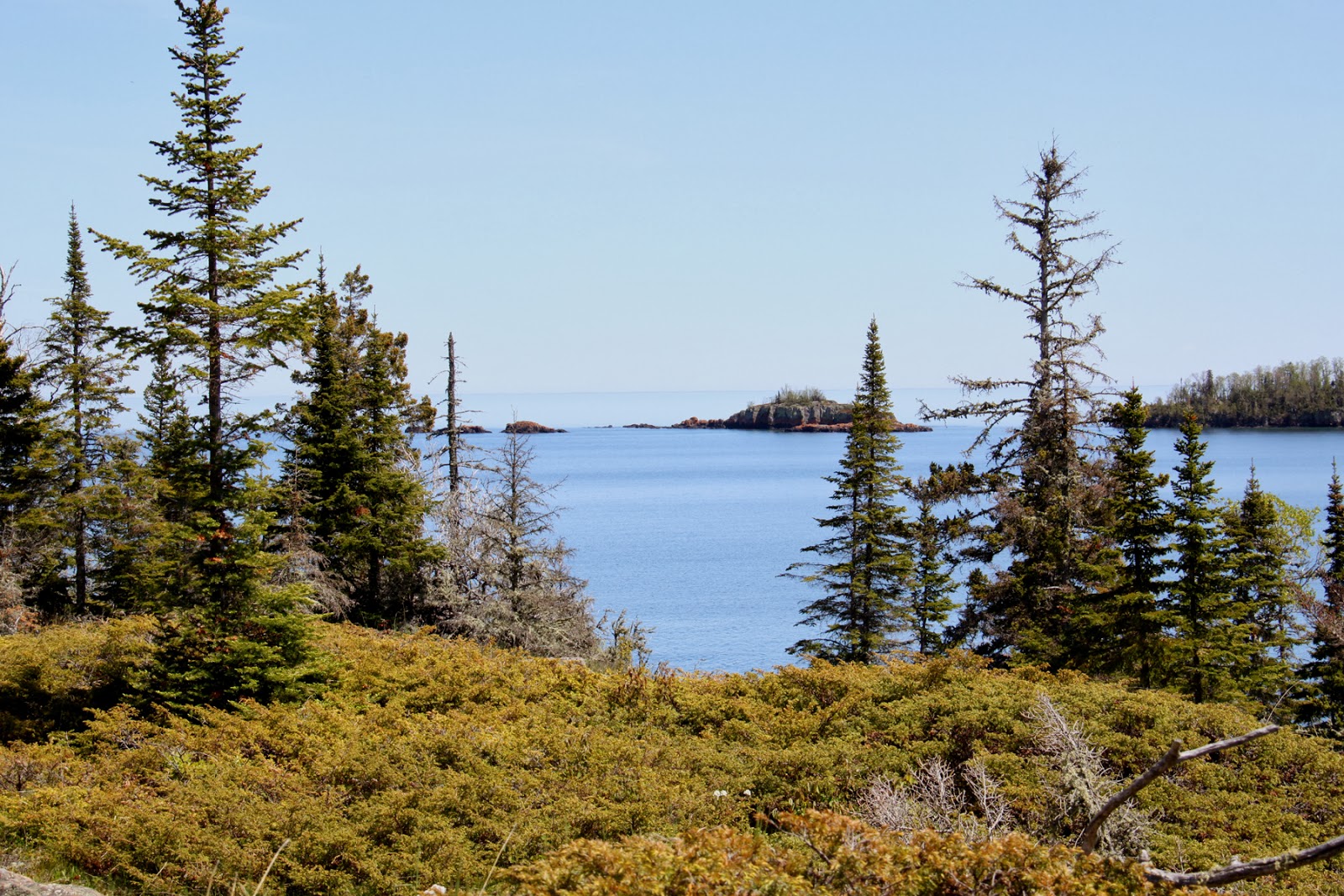 We did finally make it to Rock Harbor, and had a wonderful lunch at the cafe. I devoured a veggie burger. I don't think there's anything better than a burger when you're really hungry. We were both shocked to discover that tokens for the showers were six bucks, so we decided to wash our hair in a bucket back at camp, even though we'd dragged towels and clean clothes with us.  I picked up a few T-shirts at the gift shop and had another ice cream sandwich before we started back.

We found John and Allen sitting on the patio outside the restaurant, enjoying their own ice cream, and we joked about how long it took Mary and I to hike two miles. As if to prove our point, not 20 feet down the path, and still within sight of them, I spotted this crossbill perched on the top of a spruce. Of course I had to stop and take pictures, and I could hear them laughing.

We had a close encounter with a Kestrel on the return hike. We were just entering a clearing when this bird flew towards us across the open space, and went to land in a tree near the trail. It appeared to spot us at the last moment and veered off, landing in a snag perhaps 30 feet off the trail. I thought at first it had a stick in its talons, but it turned out to be a black snake, whose head the bird had apparently already bitten off. He watched us watch him for a while, then he flew off.

Then finally, near the end of our hike, I was able to get a decent shot of a Yellow-rumped warbler. These little guys where everywhere, but I did not have very good equipment with me so getting a good shot was not easy. I had lent my small travel binoculars to Mary since I had my camera, and she was really getting into watching the birds the time we reached Scoville Point. She stood for some time admiring this bird, and declared that I just might have made a birder out of her!

Back at the cabin everyone was taking bets as to when Liz and Zack would make it back. It was after 8:00 before they staggered into the cabin, so I estimate they spent nine or ten hours on the trail. Of course, we'd taken seven hours to go four miles (although we were in Rock Harbor for over an hour). I cooked my last meal of the trip, a big pot of black bean chili. Mary made cornbread and fixed a salad, and we had quite a feast.

Next: Weekend weather delays
Posted by Marie at 10:25 AM No comments:

Day two dawned clear and bright. I had spent a rather restless night in my tent, surrounded by unfamiliar sounds. The White-throated sparrows had sung well past 11:00 pm, and started up again before 4:00 am. Loons woke me several times, their haunting calls floating up from Tobin Harbor. My biggest problem, however, was that I was cold most of the night. In spite of having and insulated pad and a down bag rated to 15 degrees, and wearing wool socks, long johns, a mock turtle and hat and gloves, I was uncomfortably chilled. I also kept sliding off my pad, and would find myself either on the ground or with my head up against the tent wall. I had to pull my backpack up against the pad to help hold me on--and to hold some heat in. I don't know how cold it got at night--there was never any frost, but I would guess into the upper 30's several nights.

Our daily ritual went like this: We all met at the Dassler cabin in the morning. Coffee was on by 7:00 am (I don't drink the stuff), breakfast at 8:00. Alan would sit at the table with his walkie-talkie and get the weather forecast for the day. Then we were off to work by 9:00 am. Lunch was at noon, then back to work by 1:00 pm, then we'd be done with work at 5:00. Dinner was to be served at 6:00, then we'd have the rest of the day to ourselves.

Mary was our primary cook, serving up breakfast and lunch, so her work duties were at the Dassler cabin. I was slated to cook the first three dinners, and I had planned three vegetarian dishes that were essentially one-pot meals that cooked up fairly quickly and made a lot of food. The kitchen at the cabin is small but well-stocked, and has a propane refrigerator and stove top with an oven. There is a sink with a drain to an outside cistern but no running water. A full compliment of pots, pans and dishes is available too.

My duties for the day were to work with Liz, another first-timer, and Alan the boat man, picking up trash that had already been bagged at the Kemmer cottage. Kemmer is where the Artist-in-Residence program was first housed. It's a much bigger dwelling than Dassler, with a large living room, kitchen and two bedrooms, as well as a guest cabin and huge boat house in back. There are also solar panels for electricity and a couple of 250 gallon propane tanks.

There were logistical issues with using the cottage due to it's location on the far side of Tobin Harbor. To get to Rock Harbor, one would either have to paddle across Tobin Harbor, which is sometimes impossible, or hike all the way around, which is at least seven miles. The Dassler cabin, on the other hand, is at the end of a two mile trail to Rock Harbor, so residents were much less likely to be stranded.


I found a better map of the area that shows the entire northern end of the island. I don't know exactly where the Kemmer cottage is located, so this is a guess.

We made two trips to Kemmer to load trash and then take it all the way around to Rock Harbor, a trip of at least a half hour, so we easily spent two hours in the boat that day. We loaded trash into huge dumpsters at Rock Harbor, which would then be loaded onto the Ranger III and taken back to Houghton. After our second trip we stopped at the store for ice cream.

Dinner went well, and afterwards I walked down to the dock to write in my journal. Around 7:30 four of my fellow camp mates came down to the docks to paddle across the harbor to the trailhead for Lookout Louise. I was exhausted but jumped at the chance to go. I really wanted to see as much of the island as I could. We paddled down past the dock at the trailhead and pulled the canoes up on shore near Hidden Lake (see map inset, above). The trail wound steadily upward, past Monument Rock before reaching the overlook, at about 875 feet.

As we neared the top the trees opened up onto this high meadow. The moose keep areas like this free of trees, allowing grasses and wildflower to flourish.


As we climbed up through the meadow movement in the nearby trees caught my eye. I asked everyone to stop so I could get some photos. Turns out the birds were Gray jays, a new bird for me!

The view from Lookout Louise was spectacular and well worth the mile hike, regardless of how tired I was. The small bays and islands on the west side lay sprawled before us, and in the distance, Canada was visible.

Lookout Louise is situated along the trail known as the Greenstone, which runs the length of the island. Hiking the Greenstone is a feather in the cap of many backpackers who come to the island. It's a tough hike--distances between campgrounds can be challenging, there's not a lot of water up on the ridge, and when it's wet, the rocky trail can be extremely treacherous.

We lingered as long as we dared, knowing we had to return to Dassler before dark. Mike and I talked art and photography, and we all bathed in the warm evening light. Then we hustled back down the ridge to our boats.

As we paddled back across Tobin Harbor the sun slipped below the horizon, and lit the bottoms of the clouds.

Then we noticed the moon, just a sliver in the evening sky, and we all decided our first full day on Isle Royale could not have been more perfect.


Next: Days three and four on Isle Royale
Posted by Marie at 9:44 AM 2 comments: