One of the best birding locations in west Michigan in the 11,000 acre Muskegon Wastewater Treatment Facility. Here's what it says on their website on the page dedicated to birding:

"The variety of habitat at the Wastewater System includes over 1,000 acres of even-aged conifer and dryland white and black oak woodlots; over 5,000 acres of alfalfa, corn, and soybean cropland; 20 miles of drainage ditches, 60 acres of treatment ponds, 11 miles of shoreline around 1,700 acres of storage lagoons; a few hundred acres of natural upland grasslands; and assorted wetland marshes and potholes. Because of this, the 11,000-acre treatment plant is considered one of the best birding sites in Michigan. At least 256 species of birds have been documented at the facility (two-thirds of all species ever recorded in Michigan). Possibly the rarest bird ever documented in the state was seen here in April of 1985, a White Wagtail.

Tens of thousands of geese and ducks spend part of the winter at the site, sharing the area with Bald Eagles, Peregrine Falcons, Snowy Owls, Snow Buntings, plovers, sandpipers, and dozens of other bird species. At other times of the year, birders might see Red Phalarope, Greater White-fronted Goose, Eurasian Wigeon, Gyrfalcon, Eared Grebe, or American White Pelican."

Now that I live in west-central Michigan, this hotspot is only an hour away, and the piers of Muskegon another half-hour from there, making a nice one-two punch for excellent birding.

After a couple of trips dipping on my target birds, (see Vol. 3) I had picked up MBY (Michigan Big Year) bird #62 at home on January 16th--a Golden-crowned Kinglet foraging in the back yard with a mixed flock of chickadees and titmice.

Lisa and I drove down to MWTF for a day of birding before Lori's second knee replacement surgery on the 20th, which would keep all of us house bound for several days. The day was chilly and windy but the sun was out and I needed a boost to my birding confidence.

As mentioned above the facility has a lot of water, but in winter there is little of it open. The two large storage lagoons freeze over, and only two of the aeration pools are open, one being the pool where septic trucks come and dump their goods (no birds there!). Several of the earthen pools where treated wastewater is pumped as well as the canals are also open, and waterfowl often gather in the pools in great numbers. The fields are good for raptors and grassland birds, and the woods harbor lots of sparrows in winter.

We started by driving up to the aeration pool to look for ducks. We saw mostly Gadwall, Canada Geese, and Mallard, but there were a handful of Ruddy Duck floating by the near side, for MBY bird #63. We scanned the geese on the pool and those bunched up on the ice for a Snow or Cackling Goose but found neither.

Driving down the center causeway between the storage lagoons we could see a large flock of geese out on the ice. We then found the large flock of Common Redpoll that have been there all winter. It's amazing that they haven't yet exhausted the supply of seeds there. The flock is a bit spooky, and if you drive too close they leap into the air en masse, twittering and wheeling, before coming to rest 10-20 feet down the road. Getting close enough for a photo can be a real challenge, but patience usually pays off. This center causeway is a great location to find all sorts of species. Snowy Owl often hang out there when the lagoons are open, picking off unwary ducks. I saw a very rare Buff-breasted Sandpiper there and had Snow Buntings last fall (but none yet this year).

Heading down from the west side of the lagoons Lisa spotted some Eastern Bluebirds feasting on sumac berries for MBY bird #64. They were on her side of the car so I didn't try for photos. We drove over to the ponds and while we debated which two-track to take, the geese that had been on the ice lifted off and made their way to one of the flooded ponds. Hundreds of birds poured in, disappearing behind the earthen dike. We made our way over, driving the car as close as we dared to the huge flock that was feasting on the vegetation. After a couple minutes we simultaneously saw the immature Snow Goose foraging among the Canadas. I was thrilled to finally add a rarity to my year list and to be as close to a Snow Goose as I'd ever been.

We scanned the flock of about 500 geese for a Cackling Goose (a nearly identical species to Canada but about half the size, with a squat head and short bill) and watched as many of the Mallards flew off to a neighboring pond. We drove around to check them out, and found about 70 Mallard and a handful of Gadwall. Then, for no reason we could discern, the ducks in the corner of the pool took off. The sun was behind me  and the birds fairly close, so I hopped out and started shooting. Mallard is one of those ultra-common species here that tend to get overlooked. I think they are strikingly beautiful birds. 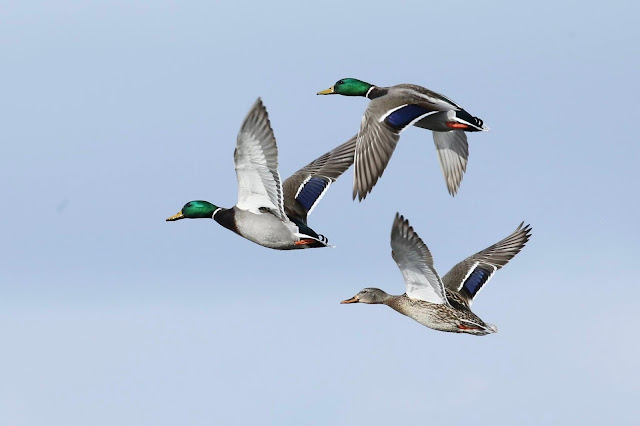 As I was shooting the ducks, the geese from the next pool over--who I'm pretty sure couldn't even see me--took wing and headed back toward the storage lagoons. The sound these birds made--both with wing and voice--is indescribable. We watched in awe as the sky eventually emptied and quiet returned to the day.

We saw a female Northern Harrier patrolling the ponds--apparently this is her turf, as she is there almost every time I've been to the facility--then we drove to the agricultural fields to look for larks, buntings, and anyone else that might be there. About halfway through Lisa saw a large raptor sitting in a tree near the edge of a field a hundred yards away, and getting it in my binoculars I could see it was a Golden Eagle. This is another Michigan rarity, and I had known that one was hanging out here, but without an extra pair of eyes I don't think I would have seen it. Birding is not only more fun with a friend, it's also more productive! The eagle eventually took to the sky and I got some shots as it flew past the car.

As we were making our way towards the main road and thinking of heading to the pier, I got a text that a Varied Thrush had been seen at some feeders at a house up in Manistee. It was just early enough that if we left right away we could get there with enough daylight to see the bird. It was a1 1/2 hour drive, and while it was likely to stick around for days (having found a food source) we decided to drive up that afternoon rather than head home and hope to see it the next day. Because the highway was fairly close travel time was going to be about the same from Muskegon or home, so off we went. But on the way out of the facility we were waylaid by a male Northern Harrier cruising the fields. Known colloquially as the "Gray Ghost" I couldn't resist a few distant shots.

After a snack and potty stop along the way we made it to Manistee by 4:15. Another couple was already there, standing at the ready in the driveway. The homeowner had graciously given us bird-crazy folks permission to come see the bird. The couple turned out to be Linda and Chuck, who used to run the art show in Manistee and who knew me and my work. Small world! After about 15 minutes the thrush appeared in a tree in the back yard--spotted yet again by Lisa's sharp eye. It seemed reluctant to come to the feeders so Chuck and I crept to the back and got a few photos for proof of this rare visitor from the West. It was a great way to cap off a good day of birding.