Birding is a fickle thing, and is all about timing. You might get word within minutes of a rarity showing up at someone's feeder, only to get there and miss it by 30 seconds. You might drive hundreds of miles to see a bird that's been at a location for weeks, only to be unable to locate it. Then, you'll be walking to your home office and hear one calling in the trees above your feeder. It's a bit like poker--while there is certainly skill and planning involved, a lot depends on dumb luck.
January 13
I spent yesterday planning a route that would take me to six different locations in southwest Michigan. Each location had been reporting rarities, and I hoped to pick up a couple of them. This would be my first day devoted specifically to birding, without other errands attached to it, and would involved hundreds of miles and hours of driving. My route and available time allowed for a half hour in each location, starting at Gull Lake in Kalamazoo.
The lake was remarkably unfrozen, as so many are this winter, and seemed to be opening up more in the 42° "heat." Right off I picked up Hooded Merganser and Trumpeter Swan, but these are species I'll likely see here at home this spring. I searched the lake for scoters, cackling geese, and especially the Barrow's Goldeneye and Greater White-fronted Goose that had been seen there. Nothing. There were plenty of ducks I could see, but many more out too far to identify. After over a half hour staring intently at every duck, I decided to head out but then spotted a pair of Canvasback ducks, a good find as it's not a species we would see at home, but not the rarity I'd hoped for. On the way back to my car I heard Sandhill Cranes in the field across the road.
From there I went to the Wolf Lake Fish Hatchery, about a half hour away, but didn't find any rarities there either. I did see a Song Sparrow but they are nesters on our lake and certainly not what I was hoping for. I did manage to get a few digiscoped shots of Trumpeter Swan, but that was it. 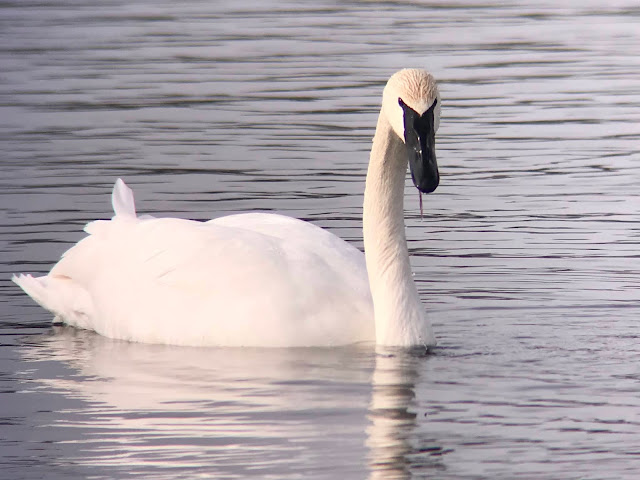 A short drive south brought me to Maple Lake in PawPaw, which was filled with Canada Geese. There had to be a couple thousand of them. I walked out to the island and scanned those geese twice, looking for cackling or g. white-fronted. Nope. Nada. There were lots of Common Goldeneye and I got to watch some of the males practicing their courtship dances, but I saw nothing new and nothing certainly nothing rare.

At this point it was 2:00 pm and I had to decid if I was going to continue with my plan and head to the coast, or change it up and go back to Gull Lake. My gut was telling me to return to Gull Lake because of the number of birds there that I couldn't identify the first time around. My head said stick to the plan, and that's what I did. It was a lovely day on Lake Michigan, and I did find a Lesser Scaup in St. Joseph, but that was it. However, back at Gull Lake, at least one of my target birds was seen by another birder that afternoon. Ah, hindsight--and listening to your gut.
January 14th
I decided to stay home, even though it's another mild day. I should have planned an outing, but after dipping on four species yesterday, my heart isn't in it. I took Bailey for a walk around the lake and managed to find a Brown Creeper for bird #60 on the year.
January 15
I was not planning on birding today as it was windy and wet, but after lunch I decided to chase a Ross's Goose that had been reported at the Hart Wastewater Facility, about 45 minutes away. Basically a smaller version of a Snow Goose, the Ross's a rarity in Michigan, and had been seen there multiple times.
The dirt road the facility is on was a quagmire, thanks to the rain and the warmer temperatures that had allowed the road to begin to thaw. I was afraid I was going to slide right into a ditch. As I neared the facility I saw an American Kestrel on a wire, and managed a few shots before he flew off. 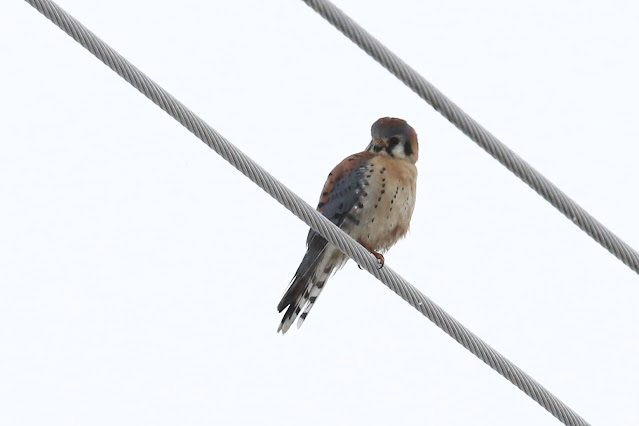 At the gate I saw a sign directing  birders to a specific parking area, stating that all birding had to be done on foot. It also said they wanted us out by 2:00 pm--and it was already 1:40. I parked, grabbed my binoculars, and started to walk towards one of the nearby pools that I could see had some open water. As I neared I could see waterfowl, but because of the high berm I couldn't see who was there.
I got close enough to see over the edge and stopped, probably 40 feet away, but I had also been seen by the hoards of Mallards that were perched on the edge of the ice. A few heartbeats passed as we had a stare down, then on some undetectable (by me) cue they took to the air in unison. NO!!! I frantically scanned the ducks as they flew every which way, and did manage to identify a handful of American Black Ducks as they flew overhead, but that was it. That is not a bird we get on our lake so it was a good find, but not rare.
I continued to the far side and looked out over the stubbled cornfield that lie between the facility and an orchard and saw that it was stuffed with Canada Geese. It's hard to believe these birds were nearly hunted to extinction because they are freaking everywhere. At least a thousand were scattered across acres of stubble. I felt utterly defeated.
I hurried back to the car and exited the facility, but realized I had a good view of the fields from outside the gate, so I pulled over and set up my scope, and spent the next 30 minutes scanning the fields, looking for a little white blob amid the browner, larger blobs and the corn stubble. Tucked up under my car's open rear hatch I was mostly out of the light rain that had begun to fall. I scanned that field over and over, but did not find a Ross's Goose.
So that's five rarities I've chased in three days and dipped on. I know it's never a given when chasing birds but this was a very disappointing streak, and makes me start to question my decision to do a Big Year. Sure, I picked up other species, but missing so many after spending so much time might make me more reluctant to chase the next rarity. I will need a few days to rebuild my enthusiasm.
Gull Lake, Jan. 13
54) Hooded Merganser
55) Trumpeter Swan
56) Canvasback
57) Sandhill Crane
Wolf Lake Fish Hatchery, Jan 13
58) Song Sparrow
Saint Joseph Pier, Jan 13
59) Lesser Scaup
Home Jan. 14
60) Brown Creeper
Hart Sewage Treatment Facility, Jan. 15
61) American Black Duck
Posted by Marie at 12:00 PM