We arrived back at the campground after our journey to Whitefish Point with some daylight to spare, so we had a fire and watched from the riverbank as the light faded from the sky.

We were right about the weather Saturday, as the clouds from the night before had foretold--it began raining around midnight and rained right through much of the morning. Not wanting to be camper-bound we hopped into the van and drove up to the Upper Falls, where there's a gift shop and brewery. We figured we'd shop for a while then have lunch at the pub, hoping the rain would have cleared by the time we were done.


The pub is a welcoming place and a bit of a surprise in an otherwise wild landscape. It's a microbrewery and have four beers on tap at any one time. I am not a beer drinker, but the pub also has excellent food. I had Lake Superior whitefish, which I think is the only thing to eat when you're in the U.P. (that and pasties, of course). For more info on the brewery, check out their site here.


As it turned out, our plan worked. When we left the pub it had stopped raining. The wind was still yowling, but it was at least dry. I wanted to walk down to the Upper Falls, since Lisa and I had mostly missed it the day before. She didn't want to go so I left her and Lori in the van and hustled the mile or so to the falls.  It's an easy, wide, paved path that leads to many great observation areas next to and below the falls. I went right to the stairs that drop down into the ravine and end in a viewing platform just above the falls.


The view was spectacular, as usual!


Sometimes known as the "root beer falls", Tahquamenon is known for its tannic acid-stained waters, the result of draining nearly 800 square miles of swamps and lowlands in the Eastern U.P. 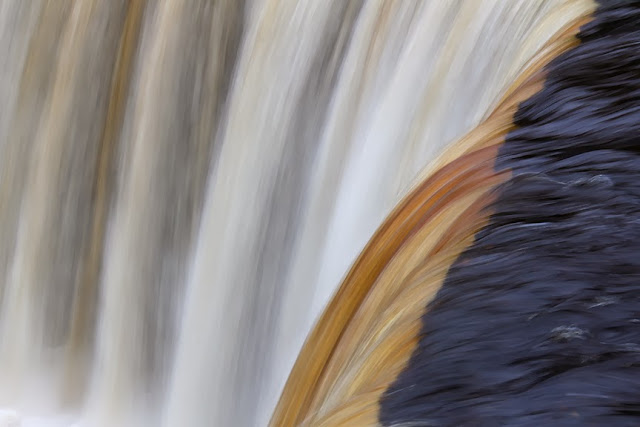 I moved farther down the observation deck to get a few shots from around the front of the falls. 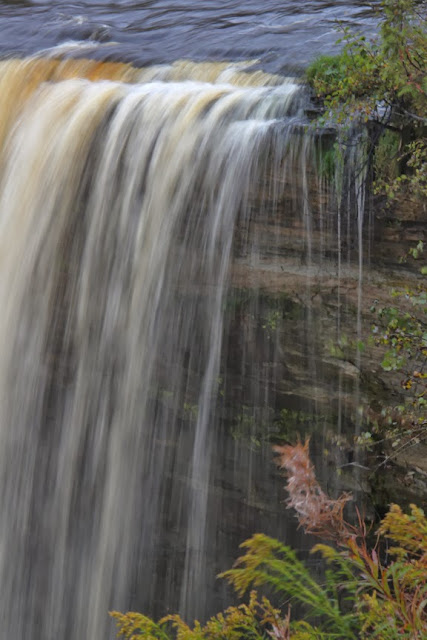 Climbing back up the 90-some stairs I then made my way downstream to another observation area. I tell ya, it just doesn't get any better than this. 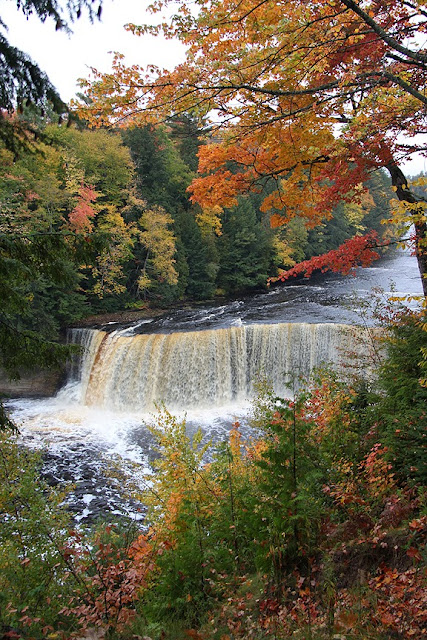 Back at the parking lot I noticed two small birds, wet and huddled against the wind, atop a concrete curb. I rushed to get my long lens as I realized these were not birds I was familiar with. I snapped a bunch of photos, perplexed by their behavior. We later identified the pair as Horned larks.

I'd seen one before but not this close. While looking at the images at home I realized one of the birds had a serious injury. I don't know if that explains their behavior but it would certainly make sense.


Later in the day we went for a drive and a walk down the Tahqua Trail, which runs along the north side of the river. The North Country Trail meets the Tahqua several miles upstream from the campground, and there's a nice, new-looking gravel parking lot there. (I hope to hike the NCT from one end of the U.P. to the other when I'm 50--I think it would be a great way to celebrate.) There was property for sale along the river, and we couldn't help but think how amazing it would be to have a cabin there, so close to the falls and Whitefish Point.