In my last post, Michigan Big Year Vol 5, I write about seeing a Horned Grebe in Muskegon. I mentioned that this was life bird #508 and the final species of the seven North American grebes that I needed to see. It occurred to me today that I should have talked more about the other six species, but rather than edit that post I figured I'd just do a separate post.

To recap, the Horned Grebe (HOGR) is a small grebe at 13.8", slightly bigger than the pied-billed. It's a wide-ranging species, breeding across Canada to Alaska and wintering along the Pacific coast and in the southeast. It's typically only seen in Michigan during migration. This bird is in non-breeding adult plumage. I hope to one day see one in breeding plumage.

I could not tell you when I first saw a Pied-billed Grebe, but it was almost certainly in Florida in winter. This was my first grebe species and I think they are darned cute. Slightly smaller than the horned at 13", it is the most widespread of the North American grebe species, breeding north from approximately the middle of the country north into Canada, winters in the southern half of the U.S.

Red-necked Grebe was my second grebe species. I first saw a pair of them on Duck Lake in Interlochen, Michigan in November 2012. I was a fledgling birder, and had stopped at the state park and walked to the lake for a look. I could see the birds at least 100 yards out on the lake and knew they were a new bird but didn't know what they were. I ran back to my car, grabbed my camera, and ran back, tripping over a branch on the way (I think there was snow on the ground) and falling flat on my face. I got some craptastic photos but was able to identify them when I got home.

A few years later I got better looks of this species on Wasilla Lake in Alaska, where a female was on a nest near the dock for our hotel. This species breeds across Canada to Alaska, winters off the Pacific and North Atlantic coasts and in Lake Huron, preferring open water to lakes and ponds.

In 2019 I had several shows out west and spent days researching birding locations along our route and near where we'd be staying. After my first show in Colorado we headed north to Idaho, stopping for two nights to camp on Utah Lake and bird the area. We were treated to several Clark's Grebes near the boat launch of the campground. This is a large grebe, about 25", with a bright red eye and long orange bill. This is a Western species, rarely seen east of the high plains.

On our way home from Idaho we stopped at several locations along I-94, including McKenzie Slough, just south of the highway in North Dakota. There I picked up two new grebes, including Eared Grebe. There were several birds in the wetland, but one adult with it's growing chick was fairly close to the road. This is a small species at just over a foot long, and tends to remain west of the Great Plains (though as I write this there's one in Wyandotte, MI). They are known by their frilly "ear" patch and short, black bill. 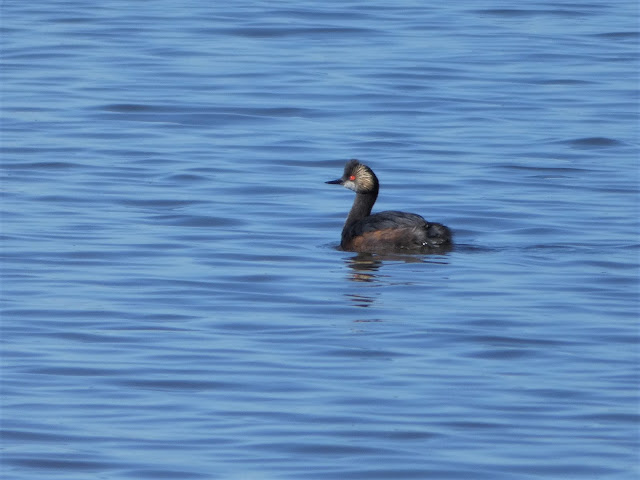 The second grebe we found at McKenzie was Western Grebe. Very similar to Clark's with a similar but slightly wider range, they were considered the same species until 1985. The easiest way to distinguish this bird from Clark's is the black hood extends below the eye, encompassing it. The bill is also more yellow than orange.

Last on the list, my sixth of seven grebes, is the Least Grebe. As its name suggests, this is the smallest of the North American Grebes--at nine inches, four inches shorter than the pied-billed. This species is darker than the pied-billed, and sports a yellow eye. In the U.S. it's only found in southern Texas.
I love this family of birds. I find them striking and entertaining. I love their bright eyes, the fluffy buts of the littler ones, the stark black and white of the larger birds. Their courtship rituals are legendary with head bobs and sprints across the water, diving in unison. There are 22 species world-wide, so I hope one day to add a few more of this family to my list.
Posted by Marie at 7:12 PM