Escaping A Late Winter at Land Between the Lakes, Kentucky

Winters in Southeast Michigan are not typically bad. We rarely get more than a few days below zero, and our snowfall is not outrageous. The two previous years were vicious, though, with bitter temps and record snowfall, and it was cold well into late spring.

This year however we had a fairly mild winter. Lots of days in the 40's, few days with snow on the ground. We got pounded a few times with big storms but the snow was gone in less than a week both times. Then came April.

Talks had already been in the works with a friend of mine to head south for a week or so. We debated where to go that was within a day's drive. We looked at several places in Kentucky and Tennessee but only settled on a place a few days before we left, based solely on the weather. When the cold snap hit and it was snowing the day before we left, some place warm was a must. So we hooked up the camper, which was still winterized, and drove down to the Land Between the Lakes National Recreation Area in western Kentucky.

Created when the Tennessee and Cumberland Rivers were damned, LBL is sandwiched between the two impoundments, Kentucky Lake to the west, and Lake Barkley to the east. The flooding of the river gorges and their tributaries resulted in hundreds of miles of shoreline, and the land between became a multi-use area, with hunting in designated areas (as opposed to a National Park, where hunting is not allowed).

One of the gems of LBL is the Elk and Bison prairie. 700 acres of prairie were created using prescribed burns and elk and bison from Canada were added to the fenced landscape. We asked at the visitor center what the best time to go would be, and she said either 6:00 pm or 6:15 in the morning, as soon as it opened. We opted for the morning, knowing we would pretty much have the place to ourselves and that the animals would be more active.


It's was a gorgeous yet chilly morning. The sun had just cleared the trees to light up last years' grasses. We came across bison very near the entrance, but they seemed quite shy and melted into the woods as soon as they saw us.

As the morning warmed the sun lit up the new leaves, making it seem like a crisp fall day. 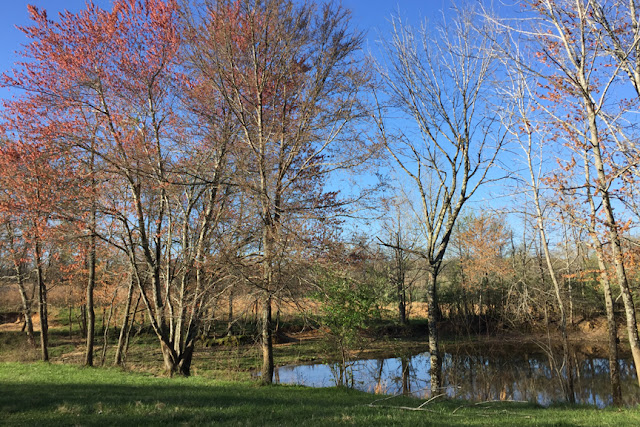 Soon we came upon a small herd of elf grazing near the road. They were not shy at all, and we got some great looks at them. 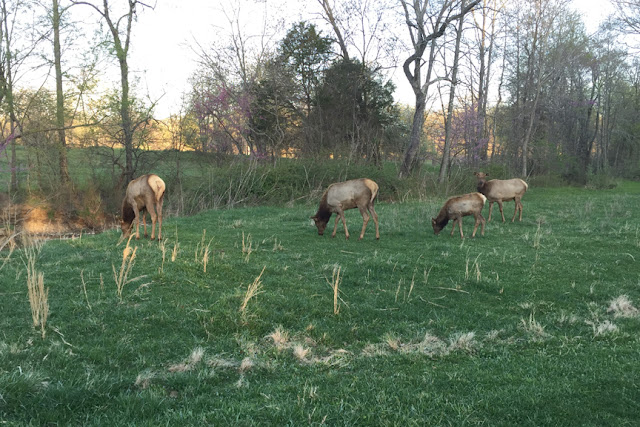 I'm sure there is some scientific research going on that requires the animals be tagged, but I still don't like it, any more than I like unconfined animals wearing bulky radio collars. It seems to me with our technology today that there is a better way to track and monitor wildlife.

I was surprised to see this young bull with his antlers still intact. They are typically shed in winter and should be regrowing by this time of year. 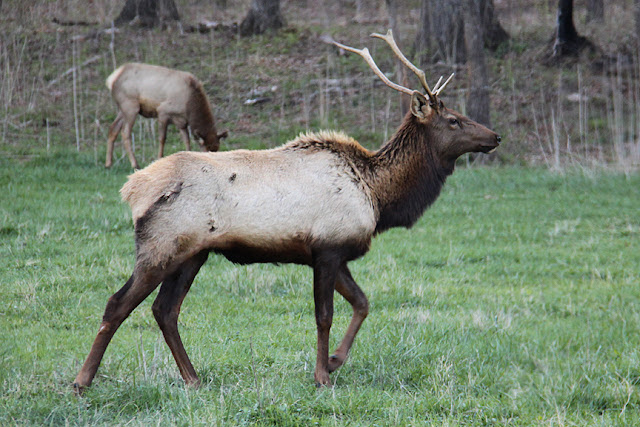 "Pffffft" said this elk cow, in response to our gawking. 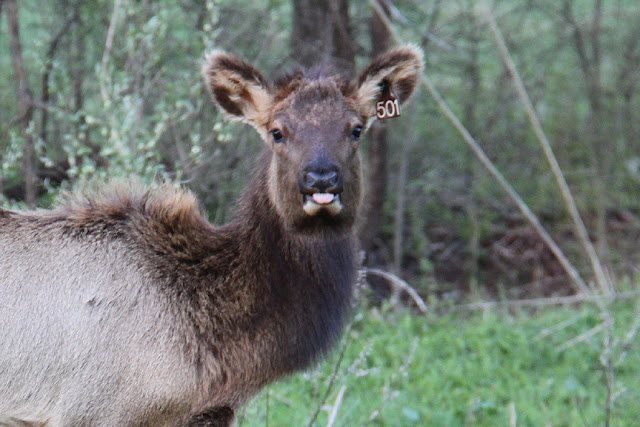 We made our way around the loop, seeing only one other vehicle, a truck pulling a boat who was going so fast they must not have seen a damn thing. It costs $5.00 to enter, 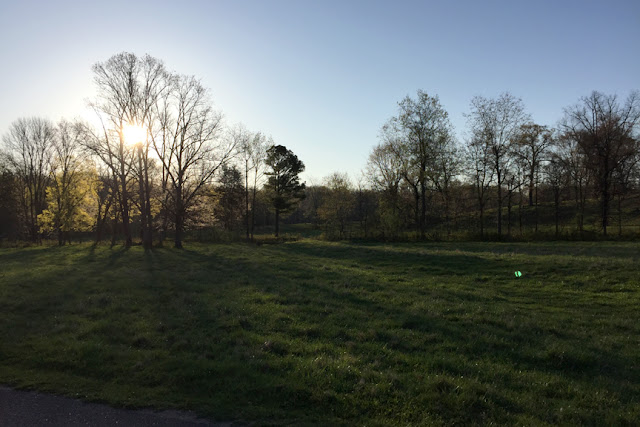 Once we began our second trip around the loop we found the bison again, very near the entrance and right out in the warming morning sun. How beautiful to see them grazing among the tawny grasses. 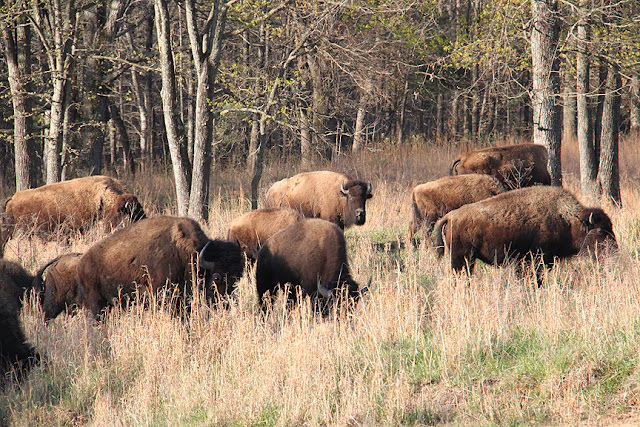 These two youngsters were playing by the road. Young bison horns have not yet begun to curl upwards, helping distinguish them from adults. 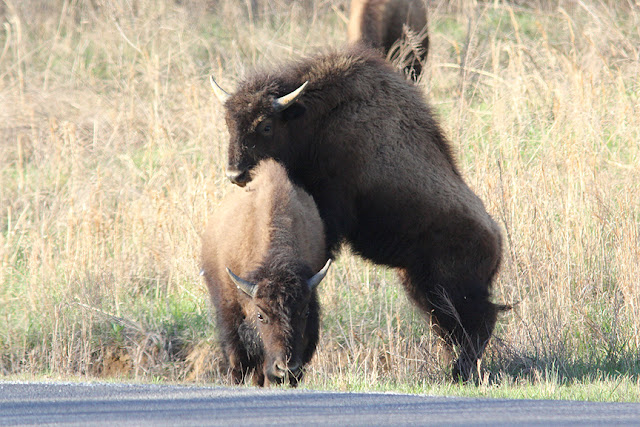 We got some really nice looks at these icons of the prairie. 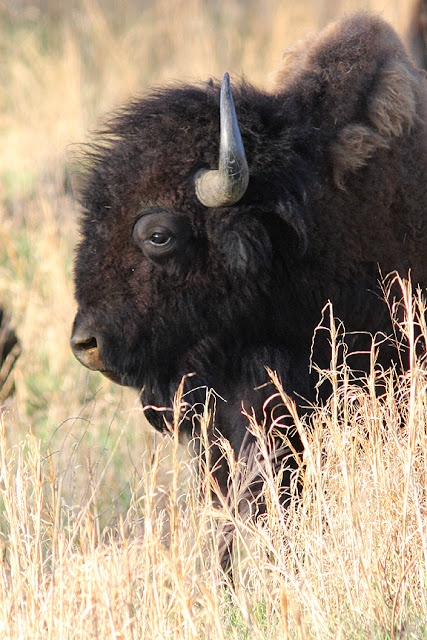 By the time we got back around to the elk, many of them had already laid down to chew their cud from the morning's grazing. 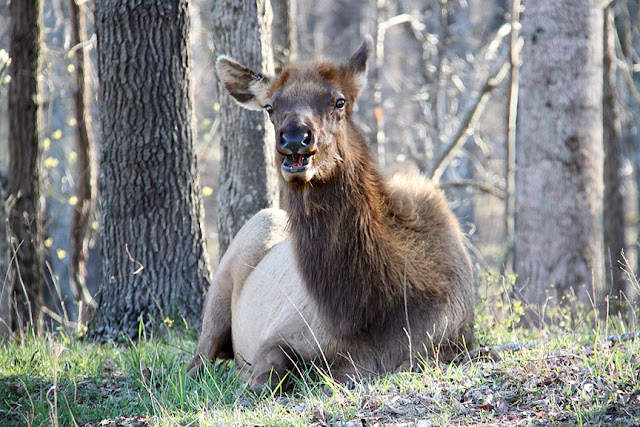 By the time we were leaving at least one other car had entered, but we'd had the place essentially to ourselves the whole morning. So if you go, I'd plan on early morning, to avoid any traffic and to see the animals at their most active.

The primary purpose of my photography is to get subject matter for my artwork. While I will always love shooting landscapes and close-ups of flowers and things, I no longer promote my photography on a professional level.
When I'm out shooting subject matter, I usually have to go home and sort through dozens, if not hundreds, of photos, looking for one I like. Sometimes I have to use multiple images to get the composition I want. But then there are the times when I know as soon as I release the shutter that I've got an image I want to draw. The Greem-winged Teal was one of those times.
Taken down on Galviston Island in Texas, while I was in the area for a show, I knew right away it would become a drawing. I was excited just to see the teal so close. My only previous view of one was from at least a hundred yards away. So to see it in this little pond was great, but to get shots of it doing something--even if that was just taking a bath--well, that was even better.
It took me two years to do the piece because I was stymied by how to do the water. But now that I've started using the stippling to do most of my backgrounds and foregrounds, I decided it was time for a duck! 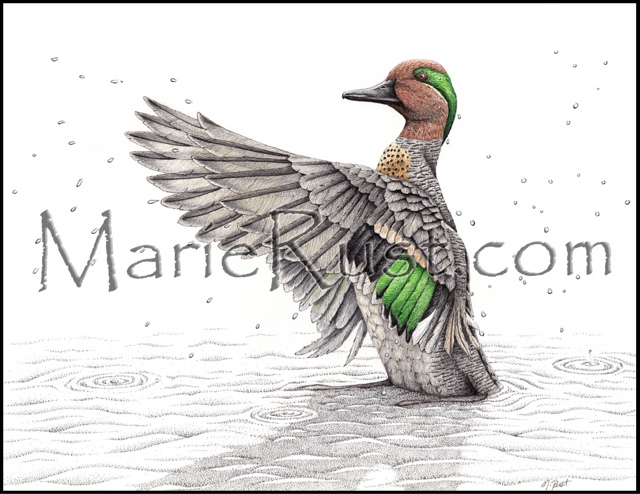 "Splash Splash," colored pencil and ink, 14 x 11, framed to 20 x 16. $950
Not long after finishing the piece I was contacted by Steve S. With the Ohio Decoy Carvers and Collectors Association to see if I was interested in participating in their show in March. I had a prior commitment, but he told me that they have a flat art competition as well, and the winner's artwork becomes the following years' logo for the show. Funny how I'd just finished my first waterfowl! I entered the piece and came in third behind two duck stamp winners. Not too shabby! 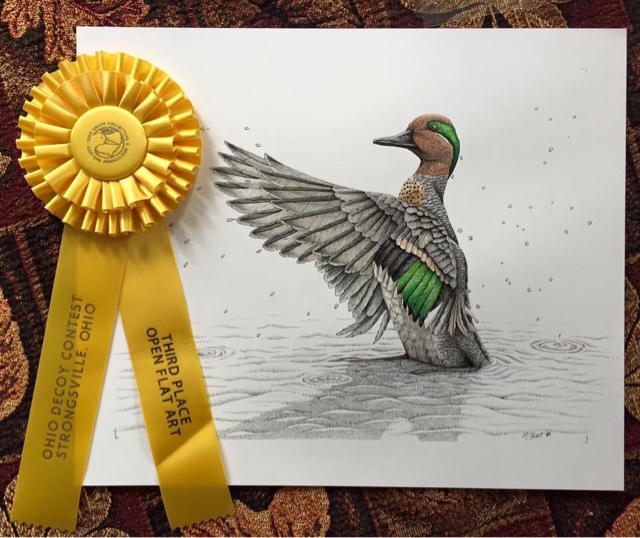