Hey hey hey, I'm back! It's a glorious day here in West Michigan, at our new home in Bitely. 75 degrees, barely a breeze, sun is shining and the birds are singing. And yes, I'm inside writing a blog post. I've been thinking for a few weeks now that I'd like to get back to it, and the bug bit me hard today, so here I am. I'll probably head out later for a hike on the North Country Trail, which is literally 10 minutes from our house!

While there are so many things to share with you about our new place, I really want to finish up the Yellowstone posts before I get into that. So here we go, heading back to September of 2016....

Thursday, September 22nd, we left the Mammoth campground and made our way down to Madison. Our four days in the Lamar valley and Mammoth areas had paid off with fabulous wolf sightings, and we were now headed down into the geyser area of Yellowstone. The road from Mammoth to Norris was closed for repairs, so we had to drive all the way around the east side of the Grand Loop to get to Madison, but any detour through Yellowstone is no hardship.

Along the way we stopped for a bit along the Gibbon River in the Norris Basin. Hot water and steam bubbled from seeps and fissures along the river.

After setting up camp we drove south along the loop road and into the Lower Geyser Basin, which is bisected by the Firehole River, so named for the multitude of seeps and hot springs that drain into it.
The area is dominated by volcanic formations, like the one seen here on the left.

As mentioned in past posts, the aspens and willows were ablaze. I couldn't resist this lone aspen toughing it out among the spruce below a rock slide. 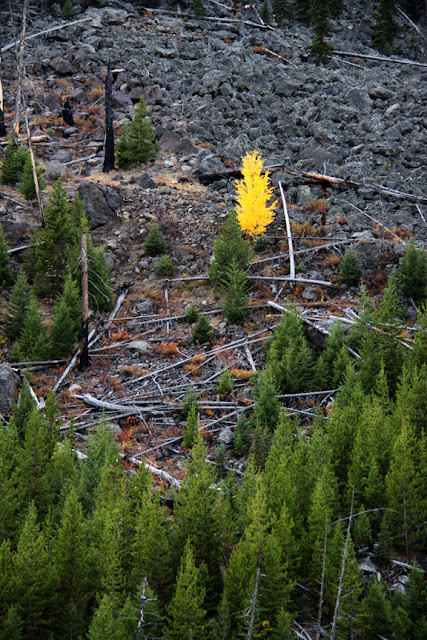 We opted for the Firehole Canyon Drive, which got us a bit off the beaten path, and closer to the river. We stopped many times along the way, and I climbed down to the river to see it up close and personal. Being in the van for so many hours and days had finally gotten to me, and I needed to move. The roar of the water and the view from the river bank were intense.

While Yellowstone is a grand place of beautiful vistas, I try to look to the small too. I'm always amazed by the places trees find to grow. This little spruce was slowly cracking this rock apart along the river bank. 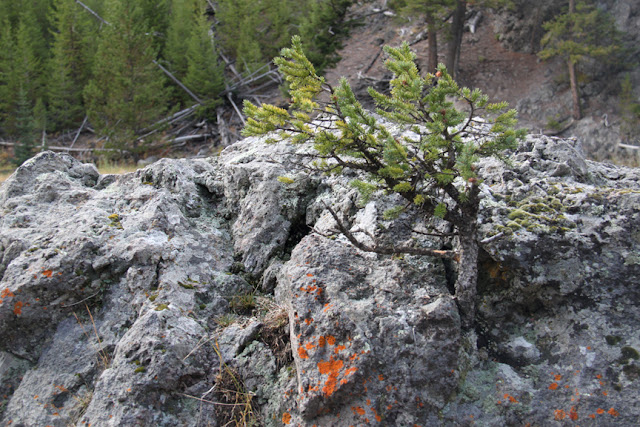 Farther along the drive we stopped for a look at the beautiful Firehole Falls.

As we headed south, ominous-looking clouds began to gather on the horizon. We pulled over near a swimming hole, where a couple of young men were in the water. The air wasn't all that warm but they reported that the water was fabulous.

I was really struck by the geology of the place, as more and more evidence of a violent geologic past emerged. These could be volcanic formations, or they could be rock that formed horizontally and then pushed vertically by some massive upheaval, then cut and smoothed by the river. 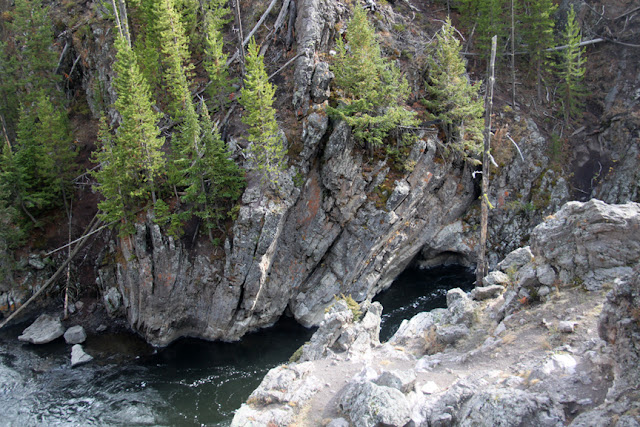 Something about these trees really struck me, and the dark sky beyond really gave the scene a dramatic effect. 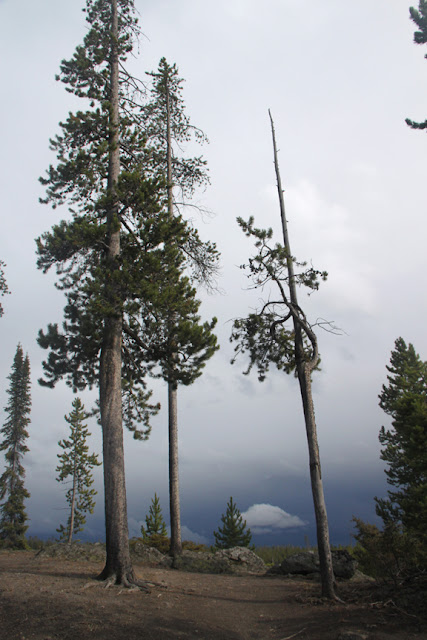 After the canyon drive we continued south to the Firehole Lake Drive, which winds around past many steaming creeks, mud pots and geysers. The color of the grass and sedges continued to blow my mind throughout the trip.

Mountain Bluebirds flitted along a section of the road, contrasting beautifully with the rusty background.

Steam from the thermals would lift and fall with the wind, creating eerie landscapes. 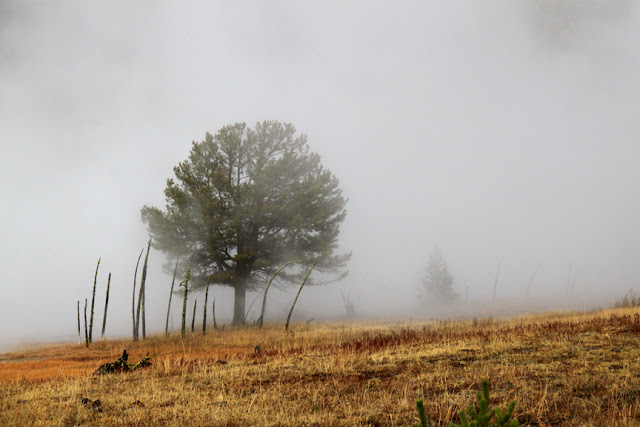 We drove through once, stopping to check out some boardwalks, then looped around again, hoping to catch one of the geysers erupting. We passed up the Great Fountain Geyser as it was surrounded by cars (and is a less predictable geyser), and stopped instead at White Dome. I got out and read about it, and walked around a bit, then heard a funny sound. I looked to see a bit of steam coming from the cone and then whoosh! Up went the geyser! I don't recall now how long the eruption lasted, but long enough for me to take several videos with my phone, as well as many photos. This was my favorite, silhouetted by the bright sky of the setting sun--and we were the only ones there to enjoy it.

Next: More explorations of the south end, including a short hike in a hail storm!
Posted by Marie at 1:54 PM No comments: