We all have them, those routines that help us keep our lives in order and stay on top of things. My mornings go like this:
Get up and dressed (goes without saying, I guess); let dog out; feed cat; let dog in; feed dog; put out bird feeders on balcony (we have to bring them in at night or the raccoons get into them--yes, on the balcony); yell at dog to get out of cat food; take dog with me out back to feed birds behind my studio; let chickens out into their pen; feed and water chickens.

Most days things go off without any surprises but today we were in for a bit of a treat. I let Jackson out and within a few seconds he woofed--that funny, under-his-breath bark he makes when he's unsure about something and is looking for backup. I went ahead and fed the cat, then opened the back door to let Jackson back in. He was sitting on the top step staring across the back yard so I stuck my head around the corner and I'll be darned if there wasn't a deer standing just on the other side of the irises, not more than 30 feet away, staring back at us. I uttered a surprised "Oh!" and then no one moved for about five seconds, until finally the deer raised its flag, turned and bounded off.

I had a young buck at the salt lick behind my studio the other day but I could not see if this was a buck or a doe. I looked around a short time later and saw the salt lick was knocked off its stump, and the ends of some of the mulberry branches had been nibbled (the berries are just starting to form). I looked a little for a fawn but didn't see one. We've had fawns every year we've lived here but I've never seen a real young one and was hoping, but no luck.
Posted by Marie at 8:02 AM No comments:

I have always been an animal person. Since I was a kid I've been fascinated with the lives of other creatures. In addition to watching wildlife and creating wildlife art I've always had dogs and cats as well as various rabbits, mice, a rat, various birds, hamsters, gerbils and guinea pigs. I love feeding the birds and have a salt lick out for the deer. And now, in addition to the usual menagerie of pets, I have chickens.

When we got the chickens a year ago I didn't think there was much to it--you provide them with food, water and shelter and they give you loads of free eggs and endless hours of entertainment. Because we let them range for several hours in the evening we knew that there was a chance we could lose a few to a fox or coyote (or a hawk, and for that story check out the post "Chicken Hawk"). I never expected that the biggest threat would come from within their own little bodies.

About three weeks ago, during a busy weekend when we had our gallery opening on Saturday and participated in an open studios tour on Sunday, one of our hens was in trouble. I was exhausted by Sunday evening and we still had to go to the after-tour party to turn in signs and ticket money. I let the girls out before we left but counted only seven--Natalie was in the nest box, presumably laying an egg. This was not unusual so we left, assuming she'd come out when she finished laying.

We returned home around 11pm, and I went out back to lock up the coop for the night (the chickens always come home to roost). Natalie was still in the box, or, as I thought, back in the box. I wrote it off as her being "broody", something hens will do when they start to think they should be incubating the eggs. But I discovered the following morning that I was wrong, as I let the girls out into their pen and went in the coop to collect eggs and feed them. There was Natalie, dead in the box. I scooped up her still warm body and took her outside. She had managed to pass the egg but the process killed her. I felt awful, and responsible. Yes, it is not uncommon for hens to die from this, but if caught early enough you can help them pass the egg safely. Her death was sudden, but if I'd been paying attention I could have helped her.

Now we face the loss of yet another hen, but this process was gradual and I didn't realize what was happening until too late. Her comb and wattles began to pale, then yellow. She developed diarrhea. Her appetite waned, and her energy level slowly dropped off until she refused to leave the coop. Finally I pulled her out and put her up in a dog crate and began to give her fluids with a syringe. Yesterday she ate some apple and popcorn and I thought she was improving. All this time I was online trying to figure out what was causing her illness, and thought yesterday for a short time that she was improving. But after a brief walk outside in the grass she too died.

Now, this may seem disturbing to some, but I have a dissecting kit and decided to open her up to see if there was some discernible cause of death. Sure enough, after inspecting her crop, I cut open her stomach and found it full of pebbles, green stuff and a few bits of plastic, massed and fairly dry. Apparently she got plugged up. I had no idea this could happen and felt stupid and ignorant for letting another hen die.

So today we are ordering books abut chicken care and health, something we should have done a year ago. I see now that there's much more to caring for my feathered friends than I ever imagined, and I plan to be a better caretaker from here on out. I was so happy that they all made it through what was a pretty rough winter and now we've lost two at the very time when the world is coming to life. It reminds me that life is precious and time is short, and we all need to take care of ourselves and others if we expect to enjoy it for many days to come. 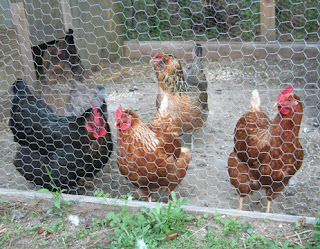 The Chickie Girls: Honey, Trouble, Sister Joan of Arc, Marty, Fancy, and Emily
Posted by Marie at 7:11 AM No comments:

The Merry Month of May

Spring is full-on here in Southeast Michigan. Most trees have their leaves, the oaks and hickories are leafing out now, and the forest floor is covered with wildflowers. I am lucky enough to live near state land and a trail that passes through some pretty healthy habitat (not a lot of invasives). Lisa, Lori and I went for a hike yesterday and saw a wonderful variety of plants, from Jack-in-the-Pulpit to early meadow rue and rue anemone to wild geranium and blankets of trillium.

This is, in my opinion, the best time to be in the woods. The canopy is not yet filled out so the forest is bright and airy feeling. The birds are nesting and so the woods are filled with birdsong, and it's early enough that the bugs are not yet a problem. But the best part has got to be the wildflowers--we've identified 14 plants so far. Everywhere you look there's something blooming, and the woods are alive with color.

On another note, the snow leopard is getting closer to being done, albeit slowly. I am planning on entering this piece in an exhibition at the end of the month so I had better get rolling on it! 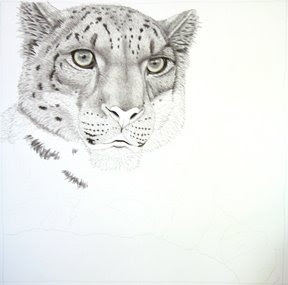