Searching for the Red-Shouldered Hawk

Last week Lori and I went out to Unit 4--the part of the Brighton State Rec Area that we've been managing--to look for hawks. We have identified a number of listed species in the area, including Blanding's turtles, which are considered a species of special concern.  On several previous trips to the area we have heard--and seen at least once--red-shouldered hawks, a threatened species in Michigan. We saw a red-shouldered several years ago in the huge cottonwood on the edge of our property, and I had one fly over me, calling, when I was in the chicken's pen last year. They have a very distinctive, descending call, that sounds something like figaro. Our property is nearly adjacent to Unit 4, so it is not surprising to have seen the birds in both places.

I made a report and sent it in to the Michigan Natural Features Inventory, who likes to know about listed species. However, they really only want to know about breeding pairs. Had we seen a nest or other breeding activity? they asked. Well, no. So, we set out last week to see what we could see. I didn't hold much hope--we are fully leafed out here now and the chance of finding a nest was slim to say the least. But it was a good excuse to get out and stomp around in the woods. I had also not yet photographed a red-shouldered in the park, and I wanted some concrete visual proof of their presence there.

We parked along the road near the trail crossing, and before I could even get to the trail this red-spotted purple butterfly landed on the road in front of me. We'd had rain recently, and this little beauty was sipping moisture and minerals from the roadbed.

Shortly after leaving the road but before the woods the trail passes through a small meadow. This is an area were we have heard the red-shouldered, and seen as many as three hawks flying overhead. So we stopped to watch and listen. Within 20 seconds Lori announced there was a cuckoo in the cherry tree next to the meadow. I found the bird and got a few shots (these are cropped quite a bit). I could tell she was right by the size of the bird and it's bright white undersides. I had heard cuckoos the last few times I'd been out in the woods, so I was thrilled to be able to see one. These are my first photos of the black-billed.

I noticed a second bird, and got a few shots of it, too. Lori was insisting these were black-billed, but I clearly saw a yellow bill on the second bird, and had not gotten a good enough look at the first to say for sure. So we debated--black or yellow??

The disagreement was ended later when we got home and realized there was one of each feeding in the same tree! The yellow-billed has more white on its tail and that distinctive yellow lower mandible, while the black-billed has a bright red eye ring.

While I had my face crammed against my camera, photographing the cuckoos, Lori spotted a hawk overhead. I got a few shots of it as it circled, but I am not certain if this is a broad-winged hawk or a juvenile red-shouldered.

On the way out of the meadow I spotted a blue-gray gnatcatcher working an oak along the edge...

...and this widow skimmer dragonfly. There were several other species there too, including common whitetail and twelve-spot skimmer. I have heard that some birders have also become dragonfly watchers, and I can see why.

Unit 4 is a pretty diverse section of the park. There's a creek that winds through it, leading from Chenango Lake to empty into the Hay Creek near our house, which then feeds the Huron River. The creek passes through a marsh/wet meadow, a low-lying area surrounded by steep, forested hills. There's a swamp (where we've done most of our work and have ID'd over 40 native wildflowers so far) and two small meadows, along with mature oaks, maples and black cherry and a few stands of pines. It is a perfect place to find all sorts of birds thanks to this diversity.

We did finally make it to the woods, and I did some climbing around, searching a few big oaks. But the hills are steep, and in this particular area there's lots of multi-flora rose (a nasty invasive) and so I gave up pretty quickly. But we walked along the trail and eventually came to a deer path that leads off towards the marsh. It's been there for years but we've never taken it, so we decided to see where it leads, and if we could get a view of the marsh, where we've seen the hawk.


I am a lover of open sky, having grown up on a lake, so I fell in love with this spot immediately.  Some flowers were blooming, and I could see there would be many more as summer approaches. I haven't had time to ID these yet. 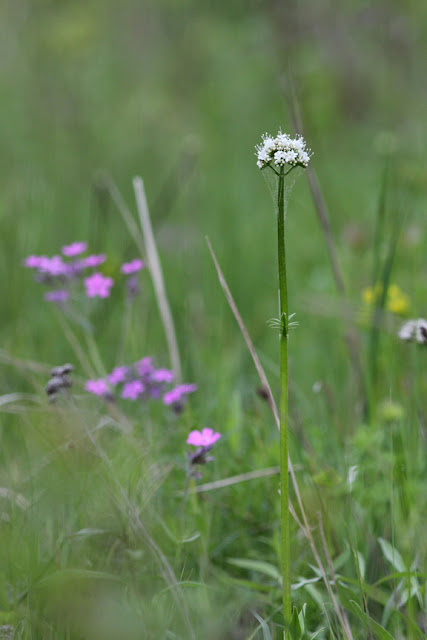 I heard hammering in a grove of tamarack nearby, and looked to see a pileated woodpecker blasting away on a snag.

While I stood still against a poplar the bird took off and flew directly overhead, into the woods to land on an oak. It started to move down the trunk into a spot where I would have had a clear view of it, but something yummy caught it's eye and it moved back up. Shortly after this it flew off. 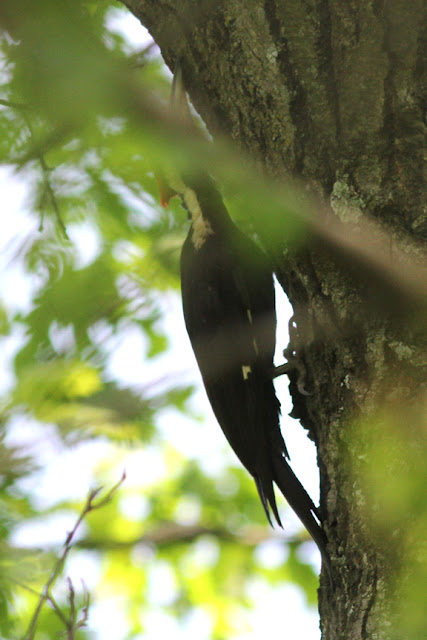 Clouds had started to build and it was close to lunchtime so we headed back. Good thing, because within a half hour it was pouring rain. We didn't see any more hawks, but I did find a spot where I am sure I will spend a lot of time watching for them.

I have a show this weekend, then I am driving up to the U.P. Sunday, and from there taking the slow boat to Isle Royale National Park. I am part of a volunteer crew working on the restoration of some cottages on the island. I am very excited about spending time on this remote, north woods island, and am sure I will have lots to blog about when I get back.