Well, it's happened again. Over a month has gone by with no blog post. I was getting ready for my first show of the season, which happened to be all the way down in Houston, Texas, the last weekend in March. I had a lot to get ready, then four days total on the road, one day for set up, three days for the show, with a couple of days for birding on Galveston Island thrown in. I always think I will have more time than I do, and I just never managed to get to my office and finish this series. And so....

I had worked it out with John that I would be on the first boat back to Rock Harbor Tuesday morning. We loaded a bunch of gear into the skiff and Alan piloted the boat back to civilization. John and I picked out a shelter for our group to use. It was going to be a tight fit, with six of us squeezing in.

Once we were settled I got ready for my hike up Mt. Franklin. I was going to have to hoof it if I was to make it back in time for dinner. It is a nine mile hike up and back, so I figured if I left Rock Harbor by 11 am I would have time for lunch at the summit and then be able to get back down by 6 pm, get changed and ready for dinner at 7 pm. I borrowed a small backpack from John to carry rain gear, lunch and a miscellany of other things, and stepped onto the trail.

Before I had even left Rock Harbor, I ran into Sarah. Remember Sarah? She is the retired nurse I met on the Ranger III who was doing a seven day backpacking trip. Solo. With borrowed equipment. Never having backpacked before. I was quite relieved to see her, actually, and she told me all about her adventures and misadventures. She was sporting a black eye, compliments of one of many falls on the trail. But the parks folks had kept an eye on her, and given her permission to stay several nights at Three Mile campground (the first along the trail west from Rock Harbor and usually a one night only campground), then OK'd her to return to Rock Harbor and stay in a shelter for several nights. I suspect they figured that would be easier on them than having to go rescue her in the backcountry. It was decided that I would share her shelter as she was alone in it, freeing up some space in ours. Once I finally began my hike I was 15 minutes behind schedule.

I don't like hiking in a hurry. I like to take my time and see things and catch my breath. But I didn't have that luxury if I wanted to make it back in time for dinner, so I set a quick pace. My plan was to get to the top with enough time to eat and relax for a little while, then I'd know how fast I had to come back down.

I really had to resist the urge to stop and look at flowers and butterflies, though there were a few things that forced me to stop, like these Red-breasted mergansers resting on a log.

Calypso orchids lined the trail, along with many other wildflowers. June is the time to go if you're into plants!

Butterflies were everywhere, all different kinds. This tiger swallowtail was feeding on blue-bead lilly flowers.

Once the Tobin Harbor trail meets the trail for Mt. Franklin it takes a turn to the north, and crosses Tobin Creek, the marshy area at the west end of Tobin Harbor.

Up and up the trail climbs, passing a beaver pond where later I saw Wood and Ring-necked ducks.

After four and a half miles I finally reached the summit and the famous Greenstone Trail. A left turn took me to a look out over Belle Harbor and to Canada in the distance. I sat down, took off my boots and socks, and ate lunch.

The rocky summit was covered with wild columbine, and the sound of bees and birdsong filled the air.

As it turns out, I did not actually reach the official summit of Mt. Franklin. Several hundred feet farther down the trail, past some trees, is the marker for the peak, I later learned. I didn't know this at the time, and I was tired enough when I got there to not care all that much. After 30-45 minutes I put my boots back on, shouldered my pack (which would give me a headache later on--no hip belt), and headed back down towards Rock Harbor. I was able to pace myself going down and spent some time photographing the flora along the way, including this Ram's head orchid.


I had seen these poplars on the way up, but they were not so impressive from that angle. Coming back down they seemed to soar over the trail. 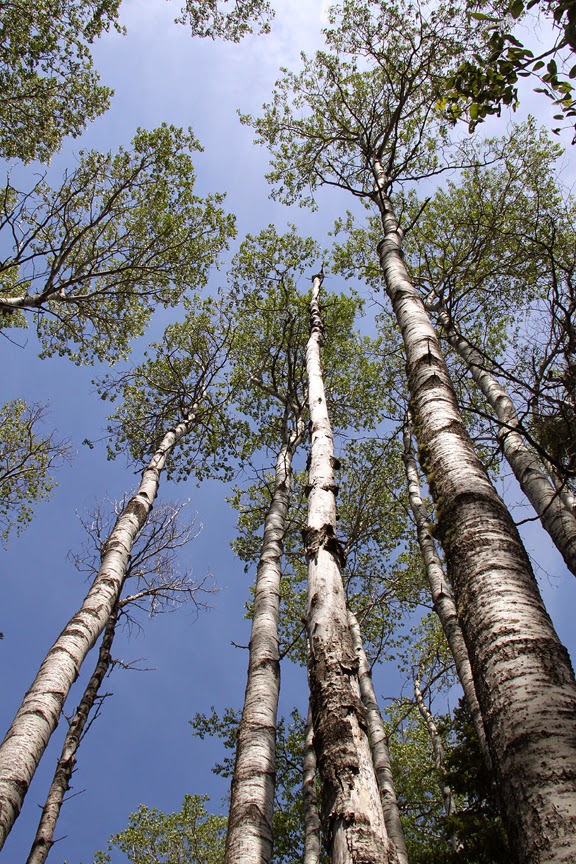 I spotted this old pile of wolf scat along the trail too. I even picked a tooth out of it, a canine from some smallish rodent, but I managed to loose it on the way home.


Back on the Tobin Harbor trail I had the sun to my back, and I took a little more time to enjoy the views of the harbor. The trail also served as a butterfly highway, and I could see their shadows on the path in front of me as they approached from behind. They fluttered along in both directions, narrowly missing me as I walked along.

I made it back to Rock Harbor with plenty of time to get ready for dinner and stretch out sore muscles. I was exhausted--I don't know if I've ever hiked nine miles in a day, and I was not in particularly good shape. But, it's good to know my limits, and that I can take on such a hike as this and still be able to function.

It was a long night sleeping in the shelter, as I had finally gotten used to sleeping alone in my tent. I was warm enough, but Sarah snored, and I tossed and turned a lot. At dawn I got up and got my gear packed and onto one of the carts to be loaded onto the Ranger III, then made my way to the restaurant for a group breakfast. John and Allen had come up for breakfast and to make sure we all got on the boat.


It was another glorious day, and a fine one for the trip back to Houghton. I know we got very lucky with the weather, especially for those trips across Superior. It can be a very rough ride in bad weather, and many people experience terrible seasickness. I would suggest keeping Dramamine on hand just in case.