Michigan Big Year Vol 5: A "Lifer," and an Unexpected Visitor at Home

A good friend of mine, Artist Christina Baal, (https://www.drawingtenthousandbirds.com/), gave me a book for Christmas called Zen Birding, and it's been most helpful for me in taking a different perspective on this listing thing. In it the authors David M. White and Susan M. Guyette talk about the usual Zen stuff--ego, expectation, beginner mind vs. expert mind. They talk about listing in the first chapter, its pitfalls as well as the joys it can bring. They warn that listing can sometimes become all about the list--simply checking off species names on a list and running to see the next. But they acknowledge that making lists is a common human trait, and that listing can actually increase one's enjoyment of birds, especially if we take time to observe and enjoy both them and the act of birding. That is, as long as we don't get angry or frustrated when we dip, and don't get jealous when someone else sees a bird and we didn't, or we get mad because we can't go birding because of work, (all about ego). This was a relief to me but also a lesson--I feel like I've been released to go make those lists, and warned that if I'm not enjoying it or if I'm having expectations or jealousy that I need to reexamine my priorities. And so, we move onward!
January 25
Lori had her knee replacement surgery last week so we have been sticking close to home and caring for her while she convalesces. That meant no chasing for a while, but today she was doing much better and there was a person coming for physical therapy in the afternoon, so Lisa and I decided to head to the pier in Muskegon to look for some of the rare waterbirds that had been reported over the previous days.
It had been sunny but by the time we arrived it had clouded up and the wind had increased, coming from the northeast. This meant off-shore, but it was still biting, even at 33°. We walked east into the wind along the channel as far as we could go, mostly with our heads down, then worked our way back slowly with the wind at our backs. Many birds drifted west on the current and we looked at each one carefully. A small flock of Long-tailed Ducks was drifting and feeding. Suddenly, as ducks do, they simultaneously started running and flapping across the water. They'd go several feet, stop, then start again. The goofy things never actually went anywhere but a little farther down the channel.
It was not long before I saw a Horned Grebe appear in the middle of the channel. Yay! This was a new life bird for me and the last of the seven North American grebe species I needed. I've seen Pied-billed Grebe just about everywhere, and Red-necked Grebe in Alaska in 2014, but then got the next four all in 2019--Clark's, Western, and Eared all out west over the summer, and Least down in Texas that fall. This Horned Grebe (MBY #68 and life bird #508) was the icing on the grebe cake, which by the way is probably my favorite family of birds.

After that we didn't see any new species in the canal, though we searched for some time. I knew some scoters and a Harlequin Duck had been seen the day before, and I hoped they had moved out into more open water. We watched the mergansers for a bit, hoping someone new might float by, then headed to the car and over to the south pier parking lot. On the way I stopped to check the harbor and had a small flock of Tundra Swans fly by, for MBY #69. 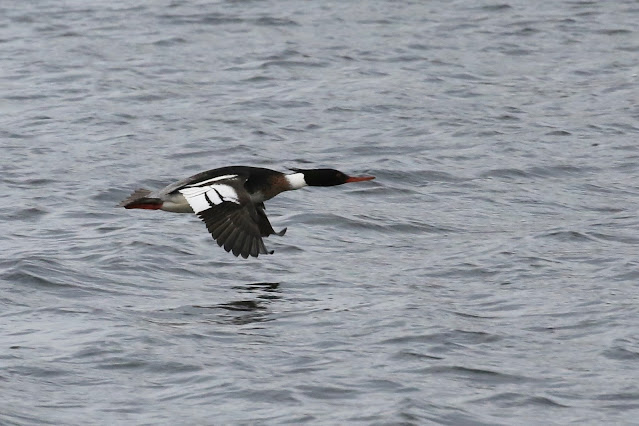 We donned our spikes and walked out onto the icy pier. The big lake was fairly calm thanks to the off-shore winds but the pier was crusted with ice from waves pushed into the harbor from the northwest the previous day. We picked our way carefully along, checking the ducks as they dove and popped up here and there. The ducks we were looking for had frequently been seen with the long-tails, so we checked each and every one. Lisa spotted a lone Purple Sandpiper feeding on the water's edge among the boulders. Most of the surfaces were frozen, some with tick, opaque, gray ice and some with clear and smooth, but apparently there was enough exposed algae for this bird to pick through to find enough to eat.

We walked out as far as the bend in the pier, at which point the ice was so gnarly and bumpy that we didn't dare go farther, even with spikes. I looked longingly at the ducks at the end of the pier and scanned them with the scope, but couldn't pick out any oddities. We did see a lone Snowy Owl way out on the end of the north pier, which helped explain the blood and body parts we'd seen strewn along the pier.

At this point in the season I have seen most of the species that regularly occur at home, with the exception of Red-breasted Nuthatch. There is always the chance for a less-common bird to appear, but I wasn't holding my breath. We have hoards of Blue Jays who dominate the feeders, scooping up pounds of seed a day to cache in some secret location, and I think they are keeping some of the less-aggressive birds away. So imagine my surprise this morning as I was walking to the office and heard an unfamiliar call from the oak above my head. I paused and listened, then continued on to the office. As I started up my computer I looked out the window to see a juvenile Evening Grosbeak (MBY #70) at the feeder! I was hoping we'd have another shot at seeing one in spring as the flocks moved north, but apparently there's at least one still hanging around. These birds are very rare winter visitors here. Despite their name they are members of the finch family, and every 7-10 years they and other finches "irrupt" and flow south in huge numbers in search of food when the pine/spruce/larch cone crop is poor in the forests to our north. I was able to get back to the house and get a few photos for record.