In 2015, in an attempt to extend my show season (which in Michigan is really only May through September for fine art) I did a whole bunch of shows out of state. Florida is the go-to place in the winter, and the state is crammed full of shows from early November into April. But starting in March, shows start to pop up in other southern states as spring makes it's slow creep northward. I decided to try some shows in spring in the south, to see if they were lucrative enough to make the hassle of driving that far and being gone that long worth it.

I piggybacked two shows, one in St. Louis, and the other in Stillwater, Oklahoma, so that I wasn't driving all that way for one show. This of course gave me the opportunity to explore the area in between shows. I will reserve judgement on the shows--the first, at Queeny Park in St. Louis, Missouri, was indoor, and the day turned out to be BEAUTIFUL--warm and sunny, a bad combination in spring if you're wanting folks to spend a day indoors. The second show, in Stillwater, had it's own issues, having been booted from its usual location on the main drag to a street a few blocks over, which meant a lot of people couldn't find it. I ended up cover costs, which of course is not a way to make a living, so I am not going back this year.

On the plus-side, it gave me an opportunity to explore regions that I'd never been to before. We stayed in St. Louis long enough to do the show, then drove south to the northern edge of the Ozark Mountains and camped for a few days on the Meramec River at Meramec State Park. It was spring in the hills, as much as a month ahead of our season in Michigan. The trees were budding, spring ephemerals were blooming, and we reveled in the warmth.

The park lies primarily on the west side of the river, encompassing 6,896 acres of high-quality riparian habitat. To get to the campground, which is in the floodplain area along the river, you take a long and winding road that plunges towards the river--or at least that's how it feels when you're pulling a camper with a van loaded down with your life's work. I had made reservations but it turned out to be completely unnecessary, as there was not another soul on our loop.

There's about 15 miles of established trails in the park, including the Wilderness Trail, which has a limited number of back-country campsites. We were not equipped for primitive camping so we stuck with the River and Bluff View trails which followed the river. We hiked as far as the Visitor Center, which was probably about three miles. We had hoped they'd have snacks there but they did not. The woman at the counter was gracious enough to sell us a couple cans of pop from the employee stash in the back. We had packed some granola bars, apples, and water, but it wasn't enough and we were pretty hungry. While three miles does not seem all that far, it takes us a long time to get anywhere due to the fact that I have to stop and take pictures of everything. And then of course we had to hike back. But it was well worth it. The scenery was beautiful, and the park was packed with birds.

The Meramec River, and all of the Ozarks, are the result of erosion rather than tectonic lifting. This was, once upon a time, a flat plain. But rainwater runoff eventually wore the plain down into gullies and rivers, creating the topography we see today. One sign we saw mentioned that if you stand atop one of the hills and look across the landscape, you would notice that all the hills are the same height--indicating the elevation of the ancient plain.

The river was edged with dogwood, sycamore and pines. Spring rains clouded the river with silt.

We picked up the River Trail from our campsite, walking through the group campground to the trailhead. Some of the trail was flat but much of it was up and down and a bit rugged in places. We wished we had packed hiking poles.


I loved the ruggedness of this trail, with its exposed roots and rocks, juxtaposed with the tender wildflowers blooming in the woods. 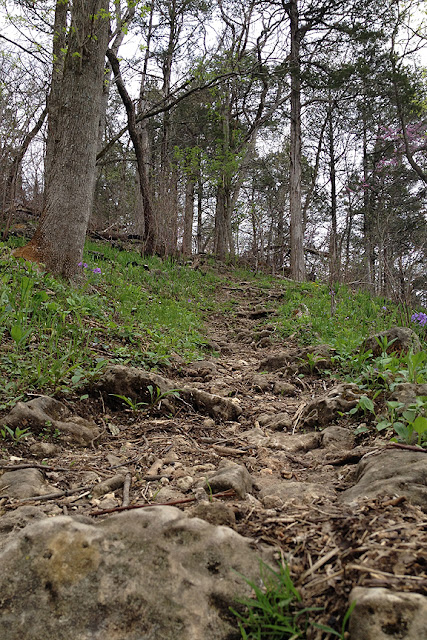 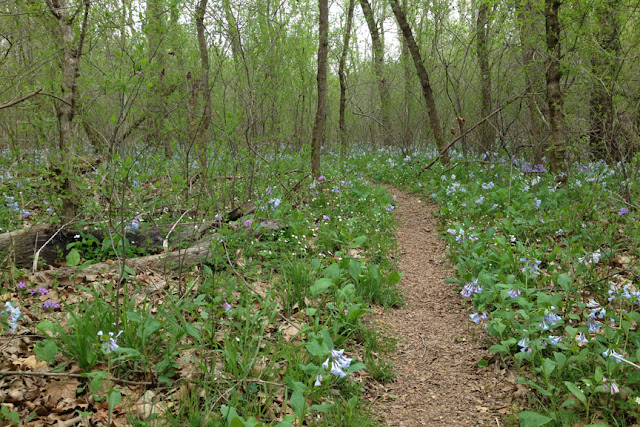 This dogwood on the far bank contrasted nicely with the dark rock of the bluff behind it. 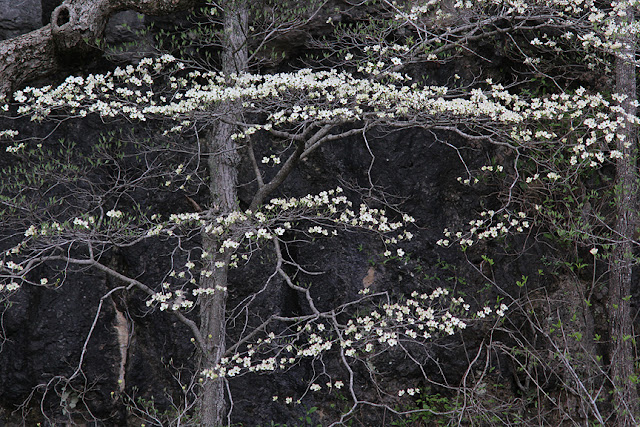 And of course, as it was April in the South, there were birds. Right off the bat on our first morning at the park, directly across from our campsite along the river, I saw my first Prothonotary Warbler. Oh what excitement ensued! 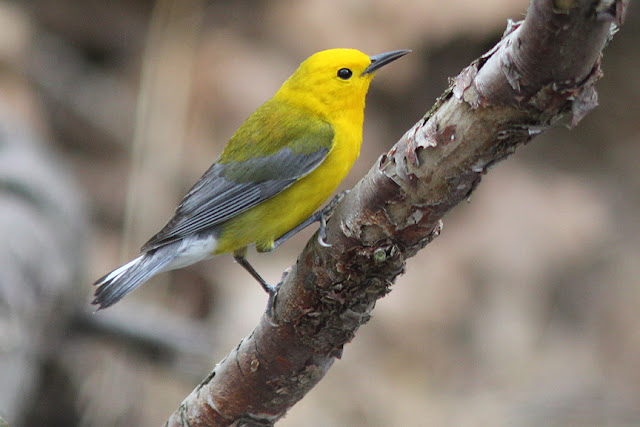 We saw lots of birds along the trail, including White-eyed Vireo, White-throated Sparrows, and this poser, a Brown Thrasher. 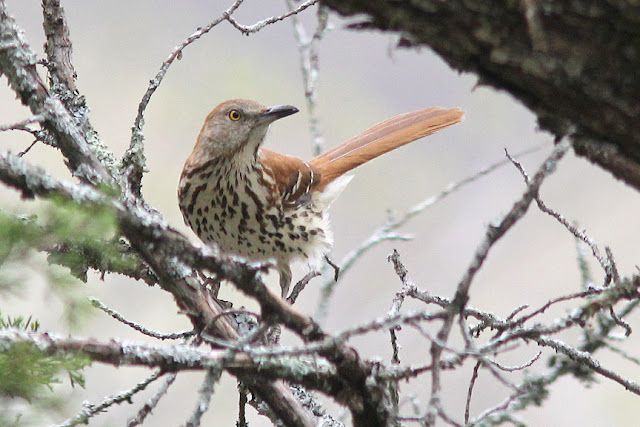 We spotted this Turkey Vulture along the trail perched in a tree. I think this is a bird that is under-appreciated, due in large part to its rather unattractive visage. But these birds are among the most graceful fliers, and I was happy to get good looks at one standing still. 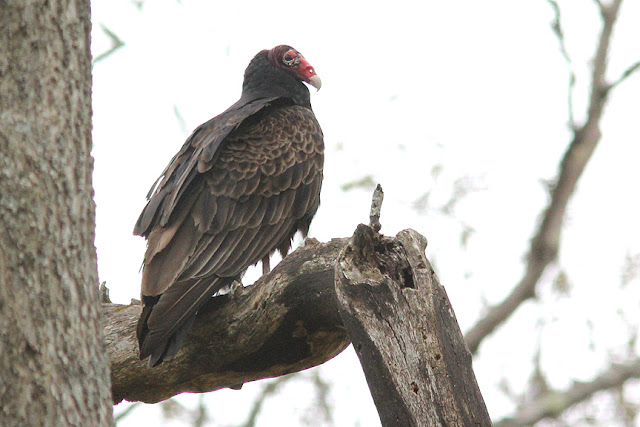 Birds weren't the only critters about. Turtles lined logs all along the river. I am not 100% certain but I think these are two different species--a common map turtle on the left, and a Western painted turtle on the right. 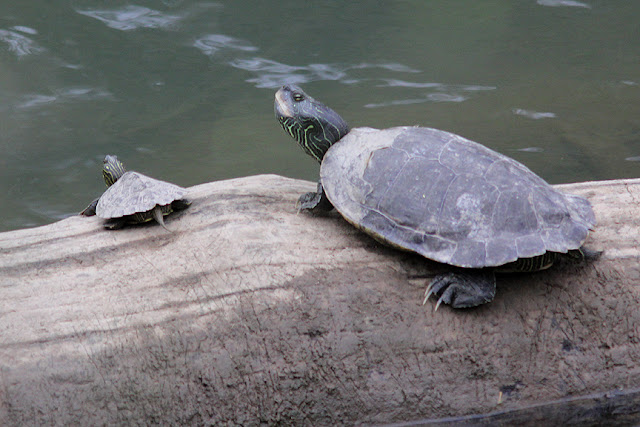 More explorations to come!
Posted by Marie at 11:46 AM No comments: