(In sorting through some miscellaneous photo folders a few weeks ago I came across these pics I shot last winter but had completely forgotten about.  I am happy to be able to share them with you now!)

I was up in my office working one afternoon (the living room has a loft above it and my desk is in the small library at the top of the stairs) when I happened to look out the sliding doors in the living room and see this gorgeous flicker working at the suet.  We had come up with the idea of attaching a cage to the deck rail so we could secure a suet block for those birds who don't cling or hang all that well.  Hoping for Eastern Bluebirds we got everything but.  However, I was excited to see the flicker, one of my favorite birds.  Rather than risk scaring the bird away by coming down the stairs, I took some shots from the loft. 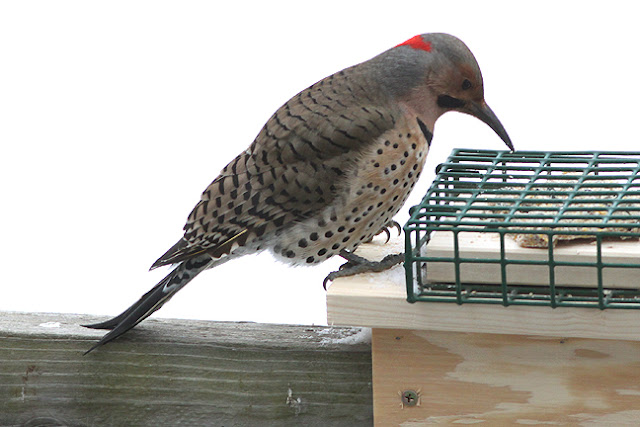 After only a few frames I saw another bird fly up.  The flicker jump down off the suet cage and confronted the interloper. 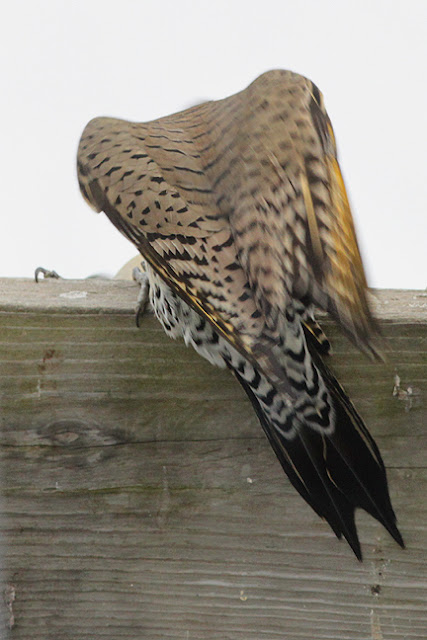 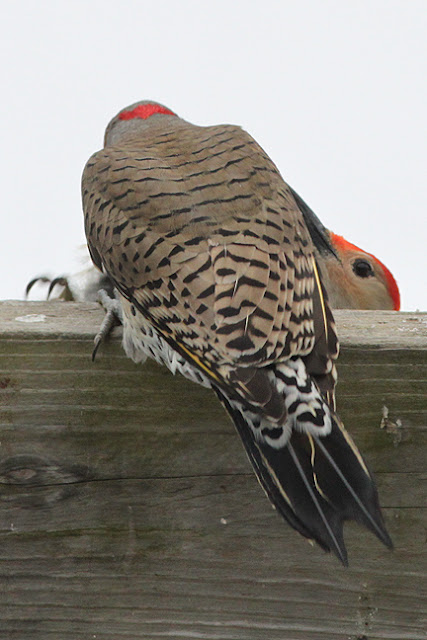 Much squawking and flailing of wings ensued.  The flicker flashed his bright yellow plumage. 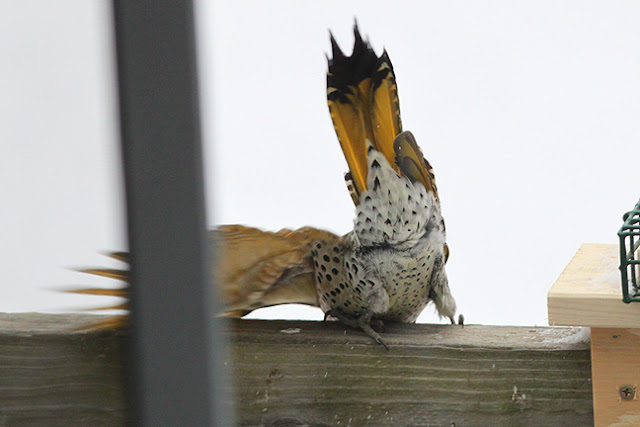 His rival vanquished, the flicker sat and watched for a few moments to see if he'd return. 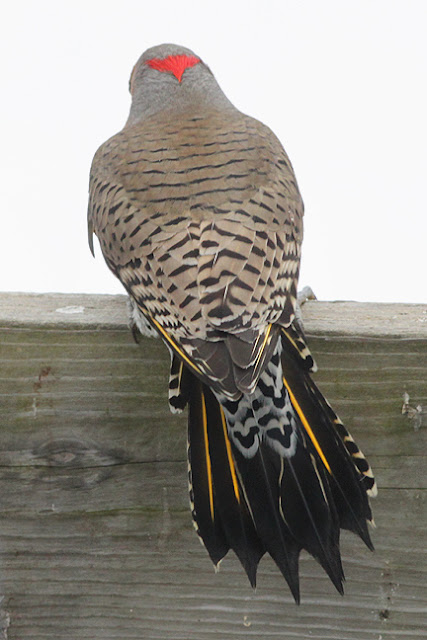 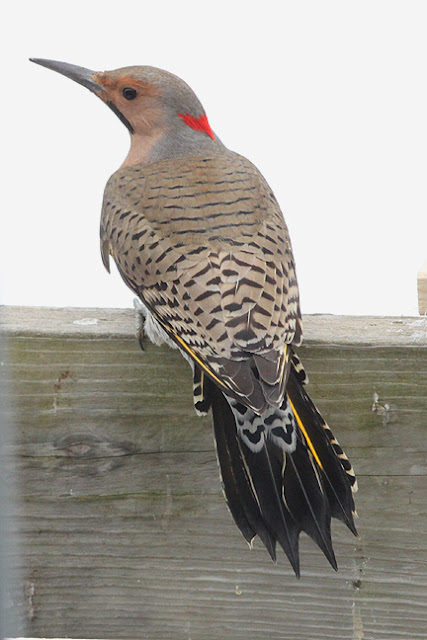 Satisfied that he had won, he went back to eating his lunch. 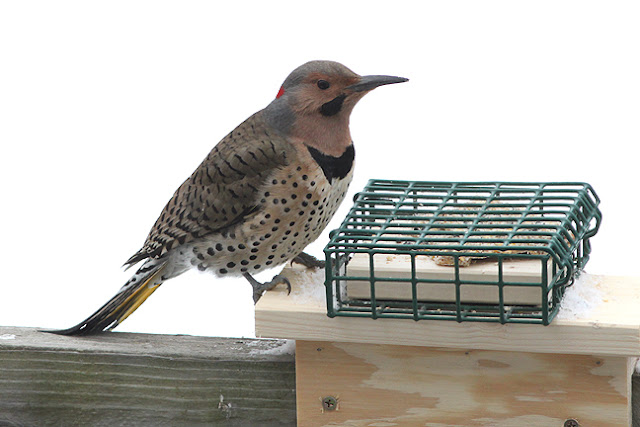 Timing really is everything.  To have caught this exchange was pure luck, especially considering the windows are behind me.  It's always exciting to see the birds doing something other than eating, and to actually record it is even better!

After taking a lot of time to get the bobcat finished I wanted to do a small piece that I could complete a little more quickly so I could feel like I'd gotten something accomplished.  I have a number of pieces ready to go at any time--I get the images ready and the main composition sketched out so when I'm ready to start another piece I have several I can choose from, depending on my mood.

I chose the gnatcatcher because I wanted to play around with some background, and I have the time (and therefore the mental space) to experiment this time of year..  I have done very few pieces with any background at all, other than a branch or tree that the animal is sitting on or clinging to, and I've never done any with a complete background.  This image was perfect, one that I shot on the final day of the Tawas Point Birding Festival this past spring.  It was cold, windy and raining, and the overcast made it quite dark out.  I had to shoot wide open to get enough light so the result was a very shallow depth of field and a blurred background.  I like that the cross-hatching is visible in the background as it gives the piece movement, and reminds me of the driving rain this little bird had to endure.

Any feedback you'd like to give--positive or negative--would be greatly appreciated!

I cannot resist birds of prey.  Striking, bold and intelligent, I find their watchful ways captivating and endearing.

This little American Kestrel is a ward of the Howell Nature Center.  Suffering from a damaged wing and no longer able to fly he serves as an educator and entertainer for kids of all ages, including me.  Puffed up against the cold he looked twice his normal size. 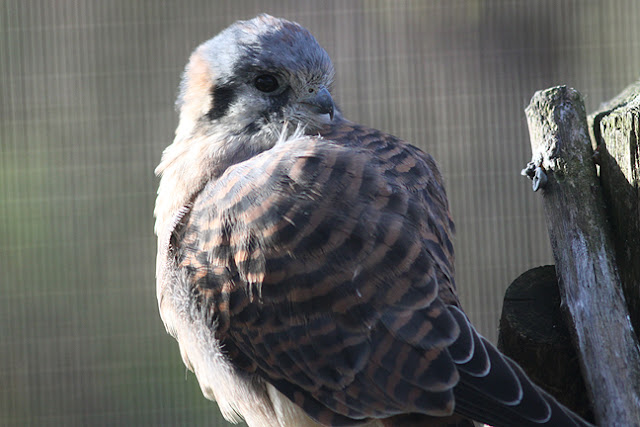 The light this day was just wonderful if a little bright. 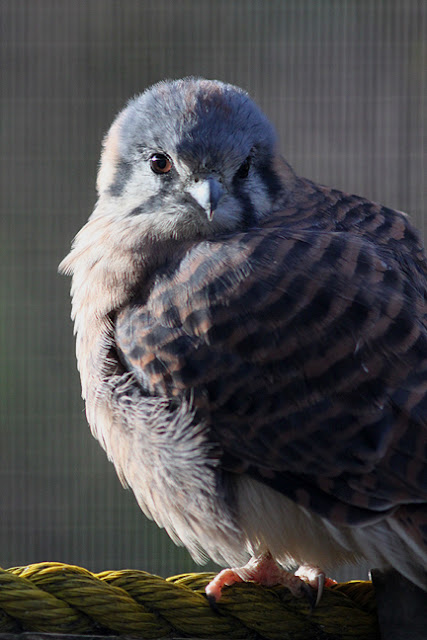 While I watched he fanned out his tail feathers and stretched and wiggled. 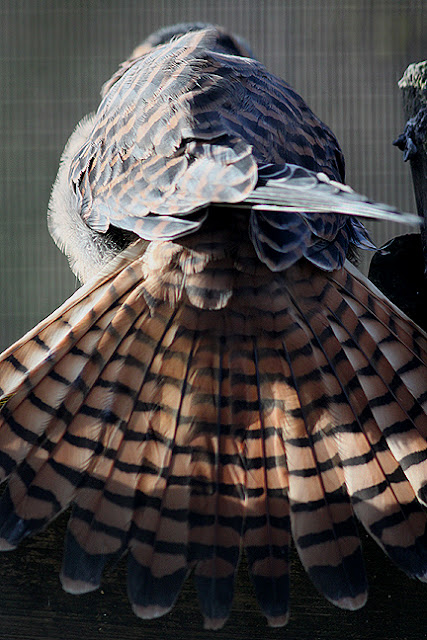 I love the lines in this shot.  I may find another photo with his head in a similar position and draw this one. 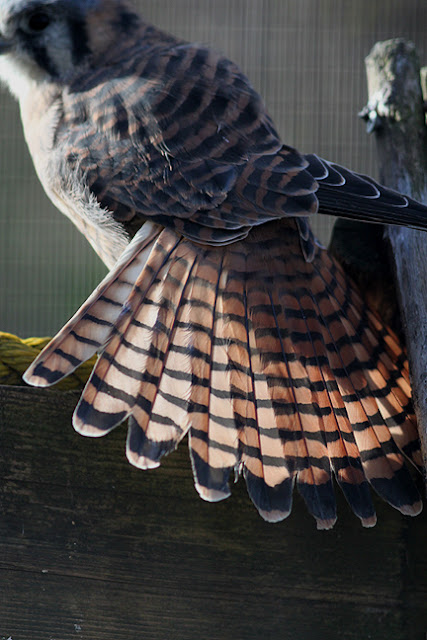 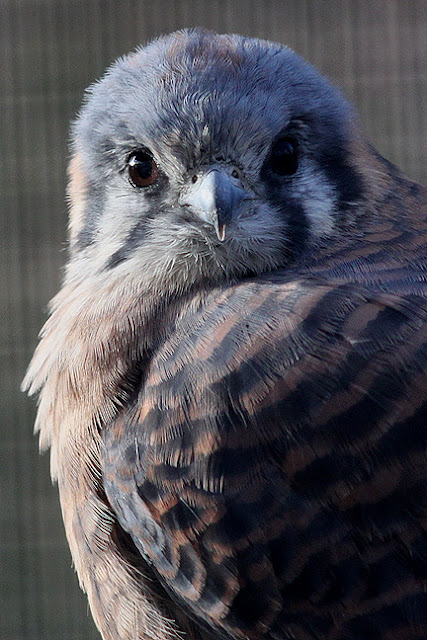 
Well this was a long time coming, and I am so glad it's done.  It's been over 20 years since I drew a bobcat and it was high time I did another.  I was looking forward to doing another cat too, as my last one was a snow leopard nearly three years ago.  I've had several people tell me already it's their favorite to date, so it was well worth the time.

A North American native, the range of this ubiquitous cat covers nearly all of the lower 48 states, down into most of Mexico and up across the border into southern Canada. There are very elusive, however, and it's not easy to catch a glimpse of one.  I have yet to see one in the wild, although I am pretty sure Lisa and I spooked one--and it spooked us--on a trail in Florida. 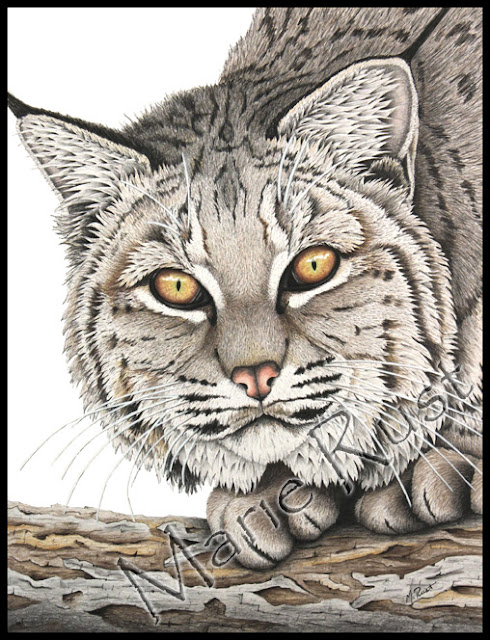 This particular cat is at the Howell Nature Center.  Once a pet, he was either released or escaped in autumn several years ago and eluded capture until late that winter, by which time he was nearly starved to death.  Wild animals raised in captivity may retain many of their wild attributes but one thing they don't learn is how to hunt.  So now he lives in a comfy enclosure at the nature center.  I think he was hoping I had the food cart.

I don't have a name for this piece yet, but hope to come up with something soon.  Will probably have something to do with his eyes.
Posted by Marie at 5:43 PM 2 comments:

Quite some time ago, over a year ago as a matter of fact, I stopped reading one of my favorite bloggers. She had been writing about the grandfather of natural history artists, John James Audubon. She'd had an opportunity to view some of his original watercolors up close and the posts were fascinating to say the least.

Then one day she started talking about style and technique. Audubon worked primarily in watercolor, and while his paintings were very realistic and finely detailed he did not attempt to paint every detail on every feather. This blogger and fellow artist then compared Audubon's work to that of another artist whose name I do not now recall who worked in acrylics. She posted an image of this other fellow's work, which I thought rather well done, and went on to publically dis him. His bird was also very realistic but apparently contained too high a level of detail for this blogger. Her comment was that if this bird showed up in her yard she would put it into rehab. She felt that there was too much detail, detail that couldn't be seen and therefore shouldn't be painted.

I was profoundly disappointed in this woman and not because my own work is highly detailed. I was appalled that she would take such a cheap shot at another artist and publically shame him and his work. Art is highly subjective and what one person hates another may love. Just because detail work is not what you enjoy or what you're good at doesn't mean that it's wrong--I simply don't believe there is a wrong and right way to make one's art. (Probably one of the reasons I never went to art school.  I wasn't interested in having someone tell me I was doing it wrong.) 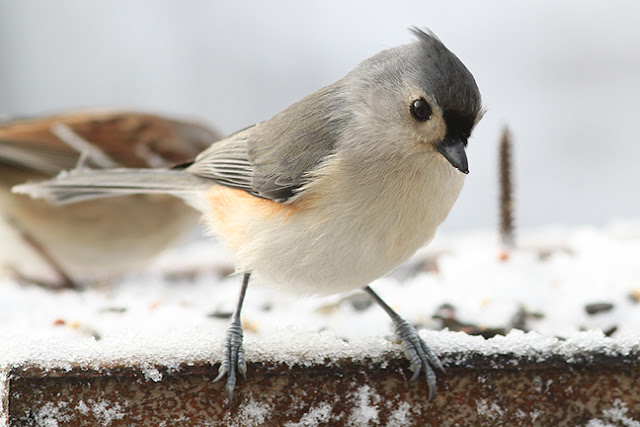 Perhaps she was trying to make herself feel better about her own style of work--we often make fun of others in order to make ourselves feel superior. But whatever the case I was no longer interested in following this blogger. 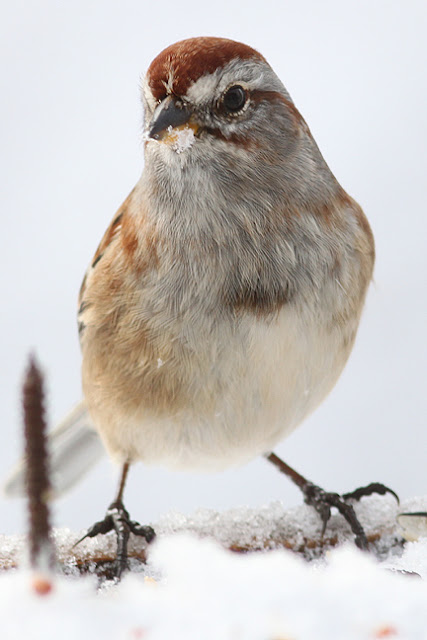 I write about this now because after I got my good lens fixed I sat down behind our sliding glass doors to take pictures of the birds on the balcony. Looking over the images later I was amazed, as I have been before, at how sharp the pictures are and how much detail can be seen. At a distance birds look sleek and smooth. But up close, especially on a windy day or when they're singing, they are rumpled and fluffed, and every feather really can be seen. 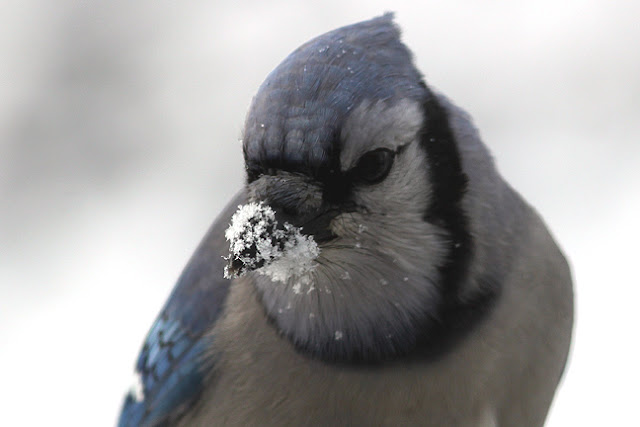 So I say now to the blogger who thinks detailed art is a bad thing, or that such fine detail can't be seen, I say, perhaps you need a better camera. 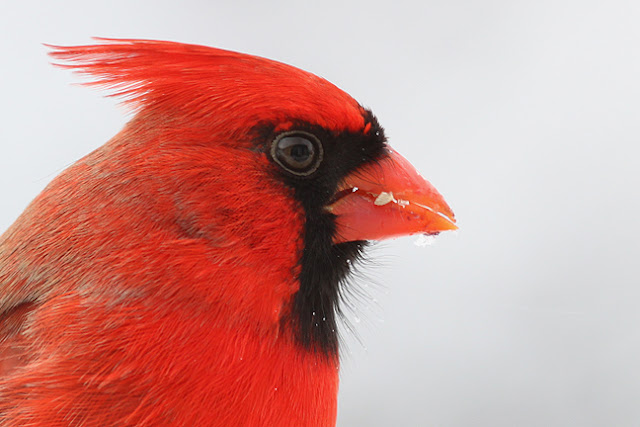 We had our first snow of the season Tuesday night.  The day started with copious amounts of rain, more than two inches in some places, and it was a miserable day with temps in the mid 30's.  By evening the temperatures dipped towards freezing and the rain changed to snow.  With everything still wet from the rain the world was coated in white by Wednesday morning.

The birds, who had been hitting the feeders pretty hard all day Tuesday, returned Wednesday morning for a feast.  I am always surprised to see my feathered friends after such a nasty night.  I fear they will get frozen to a branch or encased in ice.  But they know how to take care of themselves, and after the snow they come in droves.

We have a crab apple tree off the balcony and many birds perch there while waiting their turns at the feeders. It's a wonderful opportunity to watch them and get some pics.

Who can resist the beautiful red bird on a branch with tiny red apples?

The Goldfinches are still gorgeous, even in their drab winter plumage. This one perched on a dogwood out the side window.

No winter morning in the north would be complete without the jays.  I know many people don't like these birds but I think they are beautiful and I admire their intelligence.

Oh, how I do love winter!