Catching up on March: MBY Vol 13

As I've been birding more to list species than to really enjoy birds and birding, I've been taking fewer photos. I am less reliant on getting a photo in order to obtain an ID, and I'm often lugging my scope around too and so am less inclined to add the camera to that load. That means I've fallen off, for the most part, on taking pictures of what I've seen, so I've got less to share with you. As I write this (May 2nd) migration is kicking into high gear, and I'm once again feeling like I want to just skip the last month and get caught up. I will resist, but I will attempt a less wordy, quick run-through of a few weeks in March.

Having already dipped on both the Ross's Goose and Cackling Goose I jumped at a chance to get them both in a flooded field in Isabella County, a mid-state county where I'd never birded before. Most of the snow was gone but, while the sun shone, it was chilly with a blustery north wind.

We pulled up and saw Cackling Geese right away. Half the size of their Canada cousins, cacklers also have stubby bills and a more vertical forehead. The green arrows point to a couple cacklers. 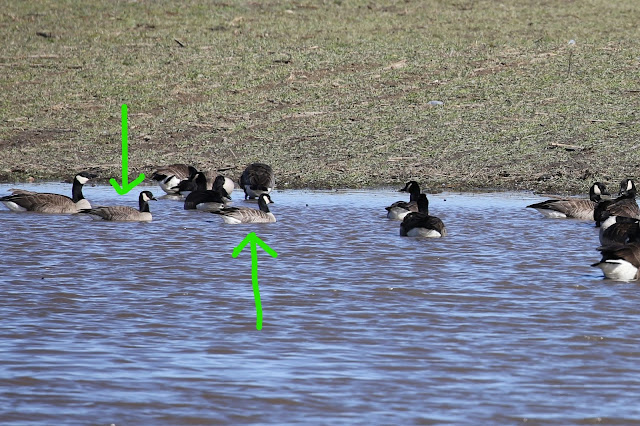 We scanned the flock and found a pair of Greater White-fronted Geese, a species I'd already seen but not this close. 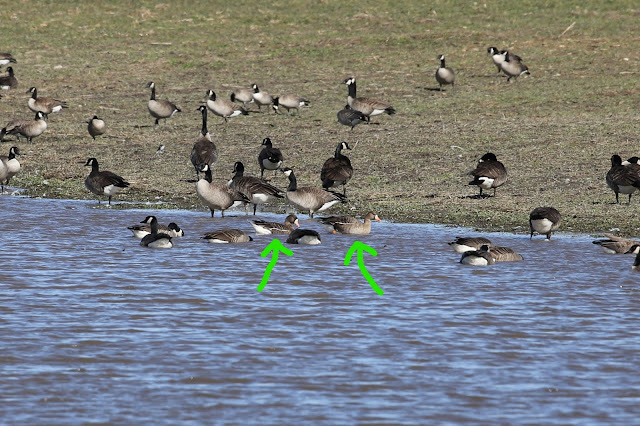 Then it was on to the white geese within the flock, most of whom were Snow Geese. But tucked into them... 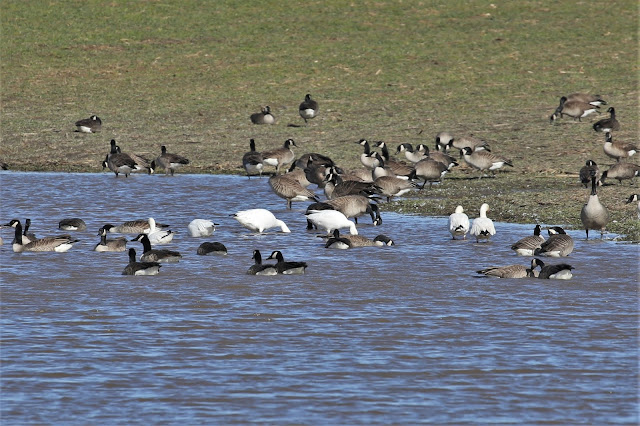 ...was a Ross's Goose. Somewhat smaller with a shorter, pinkish bill (rather than orange) with a blue base, it stands apart from the others on the far right. 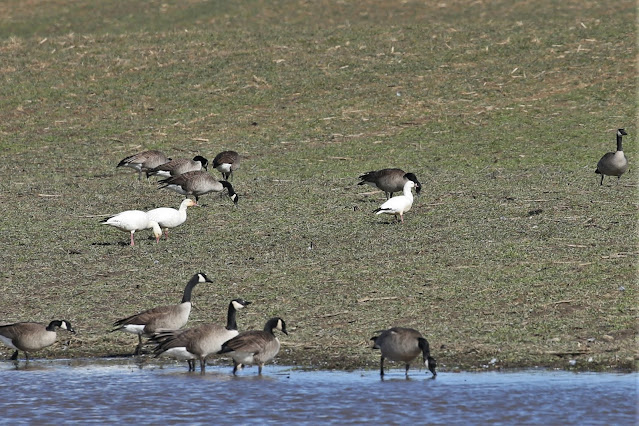 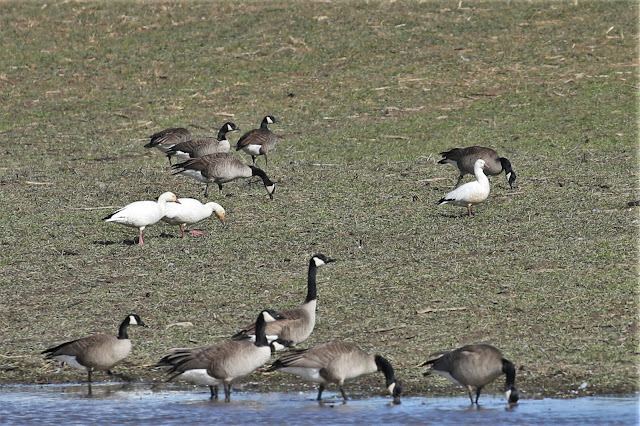 It is these subtle differences in species that has reminded me that in order to be a good birder--in order to really find a lot of species--I have to look at every individual, because you never know what might be hiding within a flock!

Mid-March was crazy warm, with days in the 60s and even a few 70s. It was hard to stay focused on anything that didn't involve being outside. The evening of March 17 I drove down our road to see if I could find woodcocks. A staple at our home in Pinckney, I had not heard them here, even though I'd seen young birds on our property. So I drove to the creek and its floodplain and right away heard the birds peenting and doing their aerial display. One was super loud but I could not place it until it took off from right next to my car on the shoulder of the road!

On March 18 Lori and I drove up to Sleeping Bear Dunes. The idea had been to just do some casual birding, but then I'd seen a report that the Red-necked Grebes were still being seen in Sleeping Bear Bay so we drove up. We pulled up to the shore to find gale-force winds blowing from the NE. I had not thought to check the weather up there--oops!--and there was no chance of seeing anything from Glen Haven or Glen Arbor, so we drove up around to Sunset Shores Dr, where I knew I could be out of the wind, up above the water and, hopefully, looking across the waves and into the troughs. Sure enough, within a few minutes I picked out a grebe from among the Buffleheads and mergansers using my scope, but I had no chance to get images in that with all that choppy water.

From there we went into Empire and had our first indoor dinning experience in over a year. We had both had our first vaccine, the place was virtually empty at 11:30, and the wait staff wore masks, so we felt pretty safe. I felt so good to eat inside instead of on our laps in the car!

March 20th saw Lisa and I in Allegan chasing a Western Meadowlark. This wayward bird had been coming to this spot in the State Game Area for several years, signing a weird mutated version of a Western and Eastern song. It took a while but we did finally hear it singing. We walked down to that spot and I saw a bird fly across the road to the corn field (this was right before it was harvested) and I took some photos, although I did not think I'd gotten the Western (there were 4-5 Eastern Meadowlark there too). It was not until weeks later that I looked closely at the photos and realized I had indeed gotten the Western. The Western has a yellow malar stripe (the area that extends down from the base of the bill) and spotted flanks, verses the white malar and heavier banding of the Eastern Meadowlark. 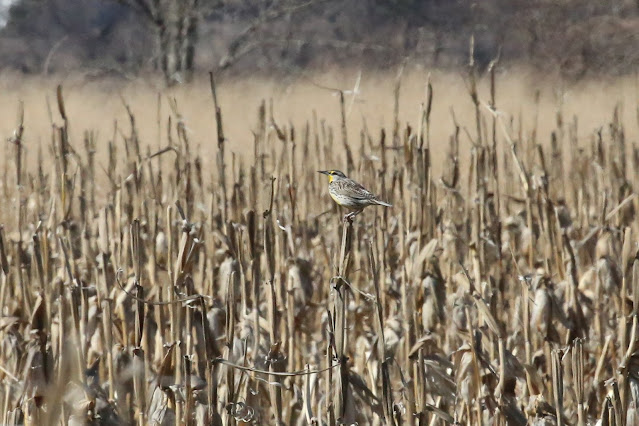 We met birder Greg Smith there and he had some insight into where to go within the Maple River SGA since he birds there frequently. So on March 23rd we headed over and started on the east side of US 127 We walked down to X Unit and found a whole bunch of ducks and other water birds, then we drove over to an area where Long-eared Owls had been seen, but we had no luck. Turns out their location had become public a month or more before and scads of people showed up to see them. That's fine, except some people where crawling under their roost tree and shaking branches to get them look. No surprise they abandoned that roost.

We then tried our luck on the marshier west side of US 127 but did not find much there beyond some new songbirds. We would go back a few weeks later after figuring out where to go for shorebirds. In all I ended up adding seven new species there that day.