The Red-bellied woodpecker is a common visitor to our feeders. We seem to see them more in winter than in summer. Perhaps there are not enough nesting places on or near our property to keep them around as much in the summer. Whatever the case, I love these birds with their bold patterning and raucous calls.

Males and females look much alike, except that the female's red head stripe doesn't make it all the way around to her bill. 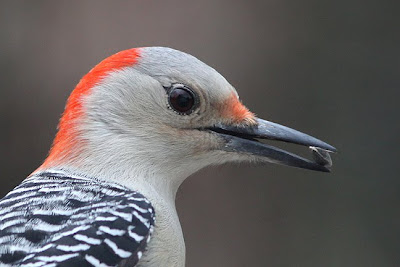 With beaks made for hammering wood the red-bellied lacks the strength in its jaws to crack open seeds like a cardinal. With feet set back on its body and toes designed for climbing rather than perching and grasping, it cannot hold the seed between its feet like the titmouse and hammer it open. So the red-bellied flies off with its prize to a nearby tree and finds a crook or small hole, crams the seed into it and then blasts it apart with its beak. 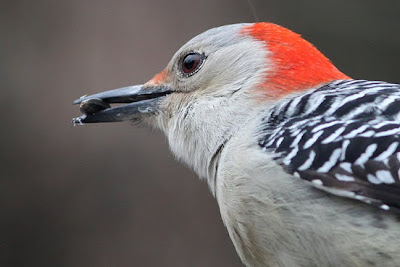 This shot is a bit fuzzy but I love the pattern of the tail. As with most woodpeckers the tail of the red-bellied is used to help hold the bird against whatever object it is clinging to, a counter-balance for its upper body. 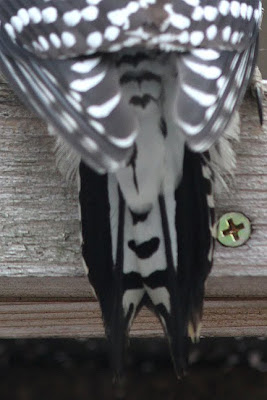 As the light began to dim the male finally made an appearance, climbing up this black cherry. A male cardinal is on the tray feeder in the front left. 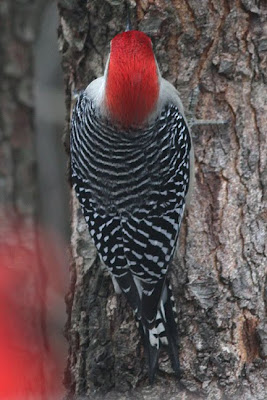 You can just see a tinge of red on its belly, at the very bottom right corner. 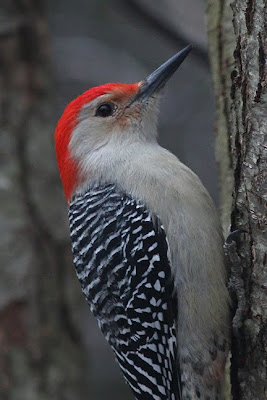 There were other visitors to the feeders that day, including this frustrated red squirrel, who was unable to get at the squirrel feeder as it was already occupied. He busied himself by cleaning his thick winter coat. Notice the snowflake on his shoulder. 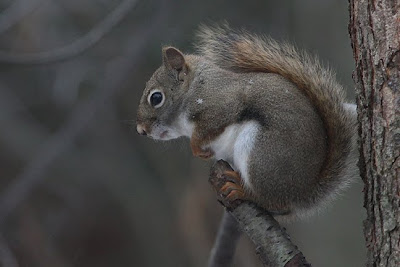 Lisa came out to the studio as the light grew dimmer still. I turned the camera off and set it aside, figuring I was done for the day. We talked for a bit, and as we did I happened to look out the window to the right of the feeders just in time to see this beauty fly up and land in the red pine next to the studio. 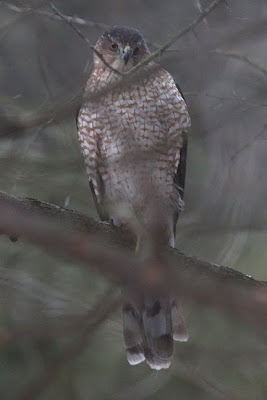 Scrambling for my camera I was able to get a few shots of this gorgeous Cooper's Hawk as it checked out the feeders. I waited for the jays to start screaming but he must have snuck in under the alarm system. The other birds saw him, though, and vanished. 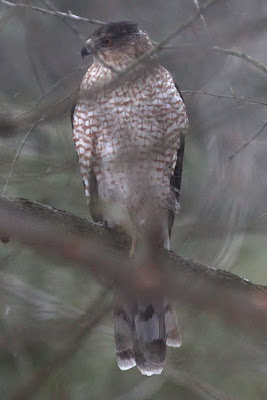 This one is cropped-in close up. Like I said it was getting dim, and I was shooting at 800 ISO so it's a bit grainy, but I can't resist. The intensity of his gaze is captivating. 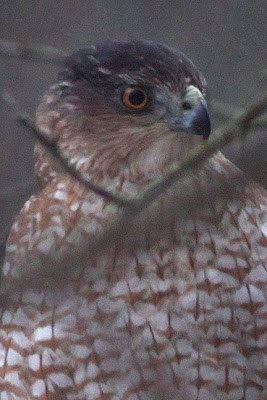 After less than a minute he flew off towards the chicken coop where we lost sight of him. The other birds never did return, and soon it was too dark to see much. But what a treat to have this predator make an appearance.

I saw a Cooper's hawk, perhaps the same one, yesterday afternoon. I was on the phone and looking out an upstairs window when I noticed a titmouse and White-breasted nuthatch in the cherry tree below me. Something about the nuthatch's posture caught my attention. A few moments later he swung around so he was hanging upside down off the branch. What the...oh! there must be a hawk! I pressed up against the window and looked up but didn't see anything in the sky, then looked over toward the mulberry tree. There, perched near the top, was the hawk, bright in the afternoon sun. I didn't have my camera so I watched until he flew off towards the pines. It was several minute before the nuthatch moved again.
Posted by Marie at 9:45 AM