We are in the midst of a kitchen renovation that has taken an awful lot of my attention and not left much for blogging. In the meantime this is a nice, quick post featuring my latest piece.

When I was in Alaska for the birding tour in June 2014 one of the highlights was the afternoon we spent on Kachemak Bay. We were treated to some wonderfully up close views of sea otters, which I was so geeked about, and knew I'd be doing a piece. This pair, showing a mom and youngin', floated within 20-30 feet of our boat. Mom was busy grooming junior. It is vitally important for these animals' coats to be immaculate--dirty fur can result in hypothermia. It was a joy to watch and photograph these two in calm waters on a bright, sunny day, and working on this piece took me right back there.


Reproductions will be available later in the year on my website.
Posted by Marie at 9:08 AM No comments:

Birds of the Corkscrew Swamp Sanctuary

Not only does the Corkscrew Swamp contain the largest remnant of old-growth bald cypress in the world, it also hosts a lot of birds. Over 200 species have been sighted there, and while that's not as many as you might find on a wildlife refuge in a migration flyway, say, in rural eastern Oregon, it's still a respectable number. What was great about Corkscrew was how dang close those birds were. The boardwalk takes you deep into the swamp and there are literally birds everywhere, sometimes just a few feet from the walkway.

Before heading out onto the trail, we stopped at the visitor's center and checked the board for recent sightings. While I am happy to just go for a walk and take pictures, there's always that part of me that wants to log a new bird. I don't recall now all of the species on the list (I wish I'd taken a picture of the board) but one that stuck out was a Blue-headed Vireo. I'd never even heard of this bird (although it does migrate through Michigan) so we made that our target bird. Wouldn't you know, it would be one of the first birds we'd see, right in the area where the list said we'd find it. I wish they were all that easy!

Lots of little birds flitted about the swamp, including this female Palm Warbler. I wish I'd gotten better shots, but she was clinging to this branch above the water and nabbing insects from the surface. I love watching their behavior as much as I enjoy their sheer beauty.

The little birds are very difficult to photograph because they move so dang fast, and, in a situation like this, they are usually in the shade, which means slow shutter speeds and, consequently, blurry photos. I was really happy, then, to get a few decent shots of a Blue-grey Gnatcatcher more or less in focus, from tip to tip, with a bonus of a tasty morsel in its beak. I need to practice shooting with a fill flash to help stop movement and bring these guys out of the darkness.

I think one of the things I love so much about photographing birds is it brings me closer to them. Not only do I get to study them in the field, through the lens, but I get to study them further at home, months or even years later. And there's always the challenge of getting a better image of a bird I've already seen. It goes like this:

1) Get an image, any image, of a bird seen for the first time
2) Try to get better images of a bird already photographed
3) Finally capture that "OMG I can't expect to do better than that" image that all photographers dream of.

I have very few number threes, which is what keeps me going back out into the field, keeps me shooting. This image is not a level three, but is certainly a number two--I'd only gotten fairly poor images of Great-crested Flycatchers until I came across this gorgeous bird. While its crest is not raised you do get a good look at those rusty primaries.

But the birds who stole the show in the swamp were the wading birds. Holy moly, they were all over, and close. Little Blue Herons were plentiful, and we watched as this one nabbed a tasty treat then paused to scratch an itch.

White Ibis were everywhere, probably the most plentiful bird in the sanctuary. I was able to get good shots from a variety of angles. I like this one showing its narrow bill and blue eyes.

This is not the greatest quality image as this bird was in some deep shade but as you can see, he found himself quite a meal in a large black crayfish. They probe the muddy bottom with that long narrow bill until they bump up against something, then bring it up and inspect it. He swallowed this crustacean whole.

There were a lot of immature Black-crowned Nightherons too, and we watched this youngster stalking prey. He eventually lunged but came up empty.

I waffled back and forth about whether this is an Anhinga or Double-crested Cormorant but I have finally settled on Anhinga--the red eye is what finally settled it. Cormorants have green eyes. In any case, it had speared this fish, and we watched as it worked it off it's bill and swallowed it. This is one of the only shots not obstructed by a branch, which is also another challenge when shooting in the woods.


Did I mention that the birds where really close? This is an uncropped image of a Great Egret who was just below the boardwalk, stalking prey.

The sanctuary boardwalk closed at sunset and we were hungry, so we hustled through the last half mile or so and headed back to the van for a picnic lunch, then went back out to the boardwalk to cover that last bit more leisurely. Much to my delight, right past the visitor's center at the intersection of the loop, was a male Pileated Woodpecker, going to town on a pine tree. Oh happy day! Getting pileated shots is not easy--in most places they are pretty shy birds. But this one, well, he didn't care at all about the people milling about underneath as he searched for insects. I did a piece based on this bird as soon as I had a chance--maybe the fastest I've turned a photo around to art. It sold at the first show it was displayed. Guess I should do some more!

So now that we have Alaska out of the way, I can get on with writing about the bazillion other places I've been in the past few years. Thanks to a bunch of out-of-state art shows I did in 2014, I visited a number of new places. While I've been to south Florida before, I'd never been to the Corkscrew Swamp Sanctuary and Blair Audubon Center near Bonita Springs, Florida.

I had booked a campsite at a place called Gulf Coast Camping RV Resort in Bonita Springs. My show was on Sanibel Island, home to "Ding" Darling National Wildlife Refuge, which I thought would be a good place for a wildlife artist (it wasn't, at least not for my style of work). Bonita Springs was the closest place I could find with an available site. When we arrived we discovered that this is a 55 and over community--oops! While there were some spaces available for the mobile retiree, most of the lots were filled with more permanent travel trailers--ones that had been skirted and sided and made to look like little houses. No one, as far as I know, objected to us camping there, and our neighbors were quite friendly.

It was in the office of the campground that I saw a brochure for Corkscrew Swamp Sanctuary. I had never heard of it, but since I was looking for something to do during our few days off after the show, I decided we should check it out. I was not disappointed!

At 13,000 acres, Corkscrew encompasses the largest intact stand of old-growth bald cypress trees in the world. The sanctuary includes a number of other types of habitat, making it a great place to see a wide variety of birds and mammals. No food is allowed on the 2.25 mile long boardwalk, so be sure to eat at the visitor's center, where there is a really good lunch counter as well as well-appointed gift shop.

The trail lead us through the pine flatwoods and along the wet prairie, where grasses and ferns mixed with scraggly trees. 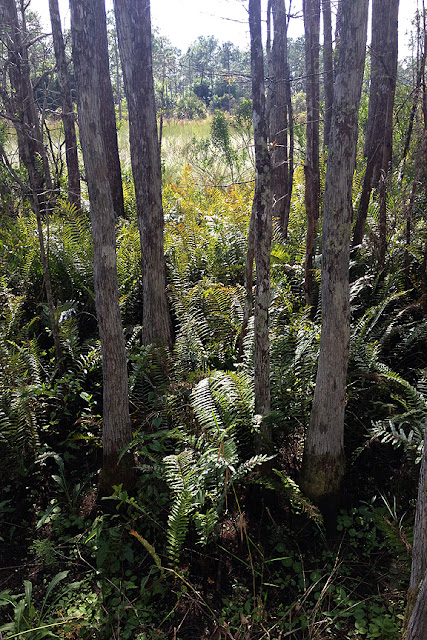 Once in the cypress grove, we were surrounded by towering trees that shade a bonanza of ponds and swamps teeming with birds. Many of the largest trees are named, but I found photographing them to be useless as I just can't convey the enormity of these giants, some of which are over 500 years old.

Florida strangler figs, Ficus aurea, are prevalent. Here's what Wikipedia has to say about them:

"Ficus aurea is a strangler fig. In figs of this group, seed germination usually takes place in the canopy of a host tree with the seedling living as an epiphyte until its roots establish contact with the ground. After that, it enlarges and strangles its host, eventually becoming a free-standing tree in its own right. Individuals may reach 30 m (100 ft) in height. Like all figs, it has an obligate mutualism with fig wasps: figs are only pollinated by fig wasps, and fig wasps can only reproduce in fig flowers. The tree provides habitat, food and shelter for a host of tropical lifeforms including epiphytes in cloud forests and birds, mammals, reptiles and invertebrates. F. aurea is used intraditional medicine, for live fencing, as an ornamental and as a bonsai."

The low sun angle of mid-February cast long shadows through the afternoon swamp. 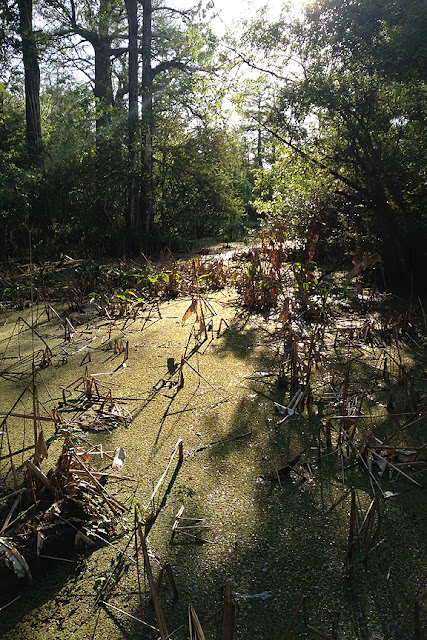 We didn't see any mammals, but there are several dozen in the sanctuary, including the critically endangered Florida panther. We did see several alligators, but not until later in the day when it had warmed up a bit.


Several plants were in bloom, including this swamp lily, crinum americanum.


But perhaps the most spectacular find, plant-wise, was this cardinal air plant, Tillandsia fasciculata, a bromeliad, that was blooming right next to the trail. An epiphyte, these are plants that do not grow in soil, but rather attach themselves to trees and collect nutrients through their leaves. It's one of those plants that is so alien to someone who grew up in the north, and I spent quite a while studying and photographing it.

These amazing plants do not harm the tree, and actually serve to help other critters as the plants become small reservoirs up in the trees. Insects are drawn to them, which in turn benefits frogs and birds. I was smitten with the placement of the pistol and stamen on these plants--that tiny splash of purple that you could easily miss if you only gave this plant a passing look.


Next: the birds of Corkscrew Swamp
Posted by Marie at 10:13 AM No comments: