Coyotes and a Pronghorn in Lamar Valley

After leaving the Blacktail Plateau and seeing the mule deer and black bear, we passed through Little America without seeing any activity--no cars pulled off the road, no critters. Past Slough Creek the road dips south and the valley opens up to the right. There are several pull outs there, before you reach the Yellowstone Association Institute, and we could see all were busy, with some cars parked on the side of the road. We found a spot and parked, and unloaded chairs and scopes and snacks.

We learned that a Scottish couple had spotted four wolves early that morning, but that they hadn't been seen in about an hour. They had bedded down above a bench on the far side of the Lamar River, and were hidden from view. We also learned that a bison had been hit by a car and killed the night before just past the next pull out, and that park employees were moving the carcass down the hill and away from the road, knowing that all sorts of critters would be on it. Coyotes had already been at the carcass overnight, and it's possible the wolves had too.

As we were unloading, we heard some howling. A fellow who was getting out of a car next to me was talking to someone and I sushed him. When I realized it was coyotes and not wolves, I apologized, saying I'd wanted to hear who was calling. He said no big deal, he got that all the time. Turns out it was Rick McIntyre, the head of the wolf study in Yellowstone. Can't say I've been much more embarrassed than in that moment!

With not much activity we had lots of time to chat with folks. A fellow photographer pulled up in this rig, of which I'm insanely jealous. Not many places that can't go!

After a while a few things happened, though none involved wolves. First, a pack of coyotes made their way across the valley. One approached the bison carcass but then trotted away. No doubt the scent of man was still fresh on it, and that may have spooked them.

Then I noticed a pronghorn moving from the west, right towards the coyotes. He paused to take them in.

The pronghorn moved cautiously towards the 'yotes. I have no idea what was going on here--coyote can't catch a healthy pronghorn, which can reach speeds of 70 mph, and I suppose the pronghorn knows that. But coyotes also bedevil pronghorn by going after their young--and a pronghorn who's not in tiptop shape may not best a pack of six 'yotes. So I watched with great interest.

As the pronghorn drew near, one of the coyote began to take interest... 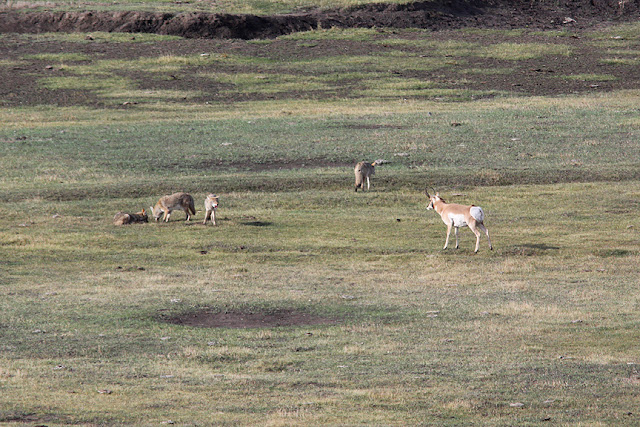 ...and as the second coyote rose, the pronghorn decided maybe it was time to put a little space between them. 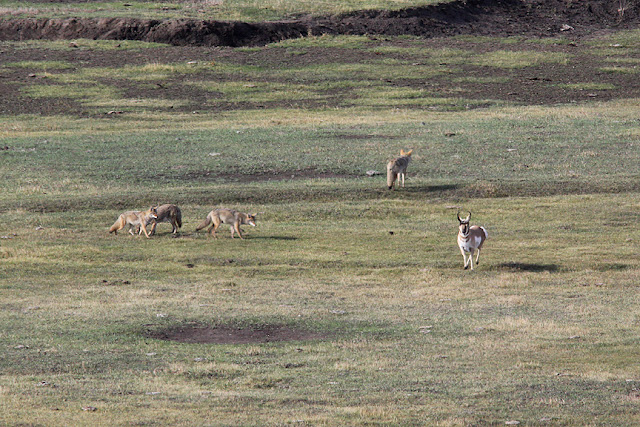 But after moving away, the pronghorn once again approached the coyotes, before ultimately trotting off to the east. 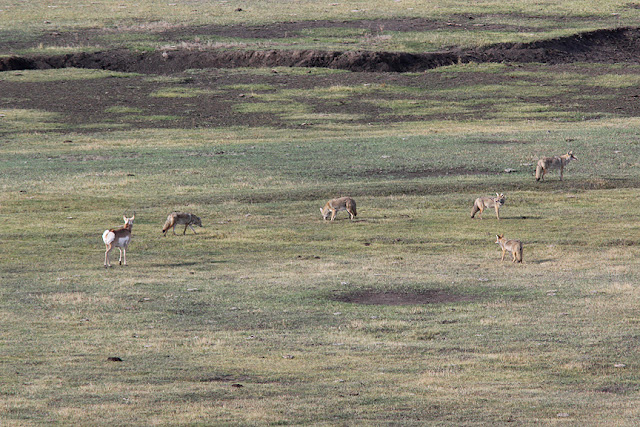 We were also treated to a grizzly sighting. A large bruin turned up directly across the valley, coming down off the bench several hundred yards from where the wolves were bedded down. He moved deliberately down towards the river, clearly seeming to be headed somewhere in particular. But as he neared the valley floor he stopped, and stood up on hind legs, and looked to the west. He held that pose for 10-20 seconds, then turned, dropped to all fours, and began running in the opposite direction. He didn't stop running--back up the hill, across the bench, into a copse of trees and gone. I have no idea what spooked that bear. There was nothing to see in the direction he'd been looking, but I guess it's possible he smelled the wolves and decided he wanted no part of them.

After about an hour we decided to pack up our gear and drive all the way back through Mammoth and out of the park to Gardiner, where we were told the folks at the Yellowstone Association headquarters would have info about wolf sightings throughout the park. Before we left I walked down to take a look at the bison. It would just be a matter of time before the carcass brought out the wolves. 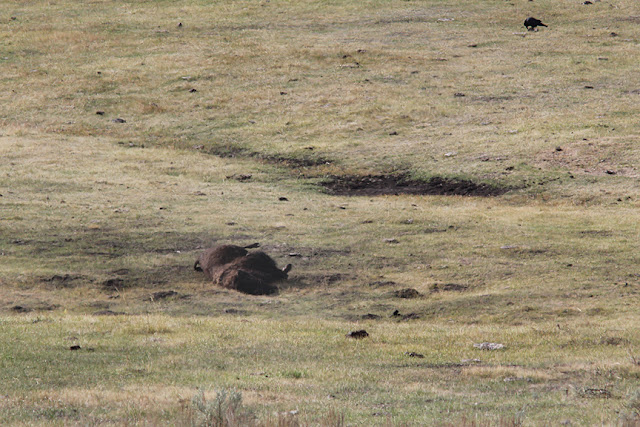