Up Before Dawn--Mule Deer, Black Bear and Waiting for Wolves

We arose long before dawn, gobbled a quick breakfast, donned winter coats and hats and gloves, gathered equipment, and drove out to the parking lot for the self-guided tour of the Blacktail Plateau. Already there were many folks gathered with spotting scopes trained on what is known as the wolves' rendezvous--the place where the pack gathers in the morning to check in and say hello. This is very common behavior as wolves are highly social and dependent of the pack for survival and well-being. The Junction Buttes were special to wolf watchers as their morning meet-up happened in a place where it was visible from the parking lot.

We set up scopes alongside the others, then listened in on some conversations. No wolves had yet been seen or heard, and Rick McIntyre, the man who tracks their movements via radio collar, was not there. But even if the wolves had been present, we would probably not have seen them thanks to a thick blanket of fog that rolled in over the plateau. It wasn't long, however, before one of Rick's assistants got word that Rick was getting signals from the Little America region of Lamar Valley--an area east of Tower Junction where large glacial erratics dominate the landscape. We gathered our gear and joined the caravan.

We had a few delays on the way. Not far from the trailhead we came across two young mule deer bucks having at it about 50 feet from the road. The sun was not yet up and the lighting terrible, but I shot away anyhow. I had never seen bucks sparring before. The clatter of their antlers filled the dark morning as grass flew and pebbles clattered down the hillside.

While the thought of wolves pulled me back to the van, I just had to spend a little time with these two bucks, who were hopped up on testosterone and charging across the hillside. 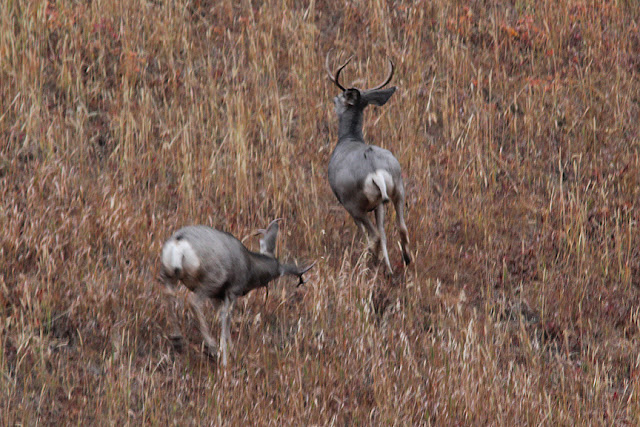 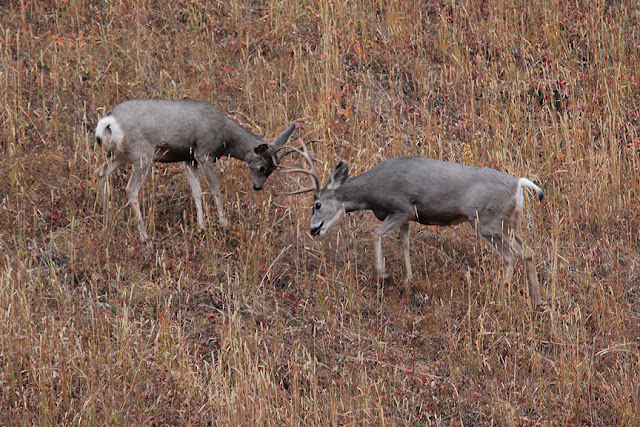 Farther down the road, as the sun began to climb, Lisa spotted a black bear ambling along behind some pines. We stopped again, thrilled to see this beautiful beast.


This was such a blessing--in 48 hours we'd seen grizzly, mule deer, elk, bison, coyote, pronghorn, and now black bear. All we had left on our list of animals we really wanted to see were moose, Great Grey Owl, and, of course, wolves. 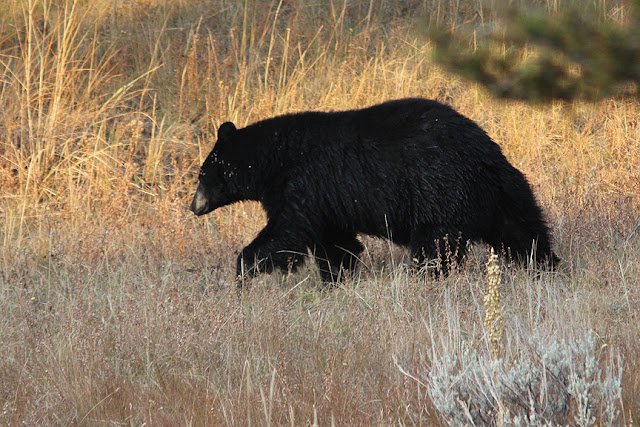 As we made our way towards the Lamar Valley, the landscape opened up to show us the sunrise. 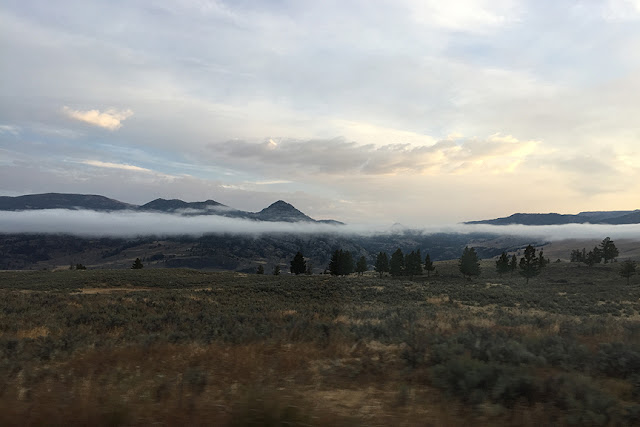 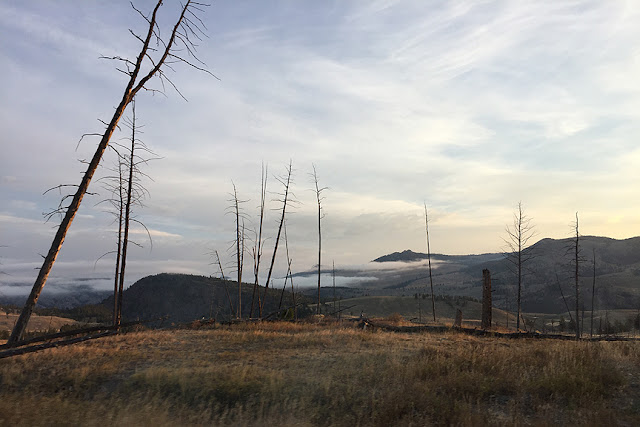 Next: Lamar, Gardiner, and back to Lamar.
Posted by Marie at 9:43 AM No comments:

Mammoth to Pebble Creek and Back Again: Day Two In Yellowstone National Park

Our first full day in Yellowstone dawned bright and sunny. With no particular place to be, we were able to sleep in a bit for the first time on our trip. We had decided to drive back to Lamar Valley to look for wolves, then on to the Pebble Creek area for lunch, and work our way back to Mammoth late in the day.

On the way out we stopped at the terraces at Mammoth Hot Springs. I've realized, looking at the map, that I haven't ever seen the actual hot spring here--it's off the auto drive, which I haven't done either time I've been here. Oops. In any case, the lower terraces are amazing, and the boardwalks allow you to get quite close.


A sign at the terraces states that they change a lot over time, as the springs migrate, or become closed off altogether. It was certainly much different than when I was there nine years ago--there seemed to be a much smaller active area. Nonetheless it didn't disappoint. The terraces still shone with white, grey, orange and green. Steam rose and the springs drip drip dripped. 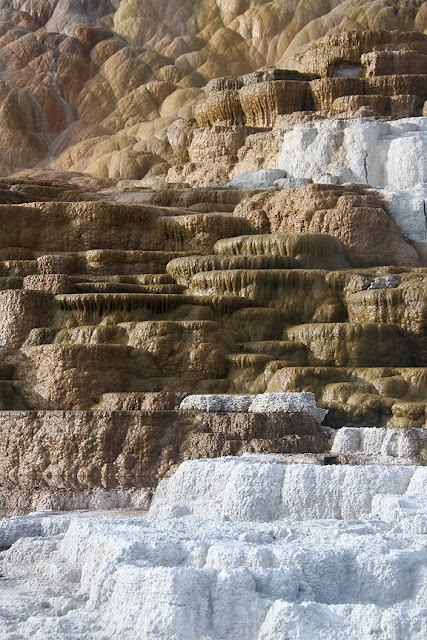 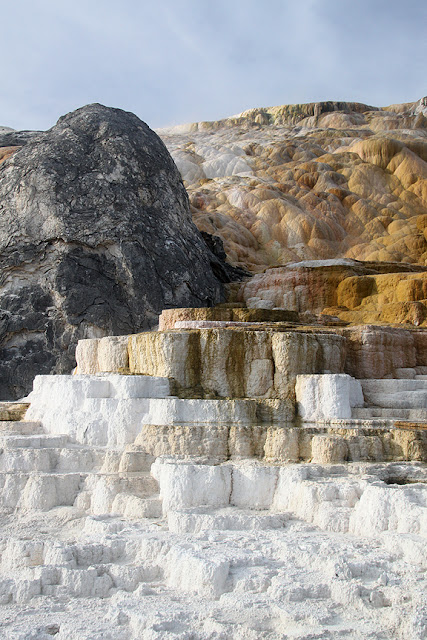 I'm quite taken with the stark beauty of this place. It's so unlike anything I've ever seen, so otherworldly. The dead and broken trees seem so surreal in this landscape. 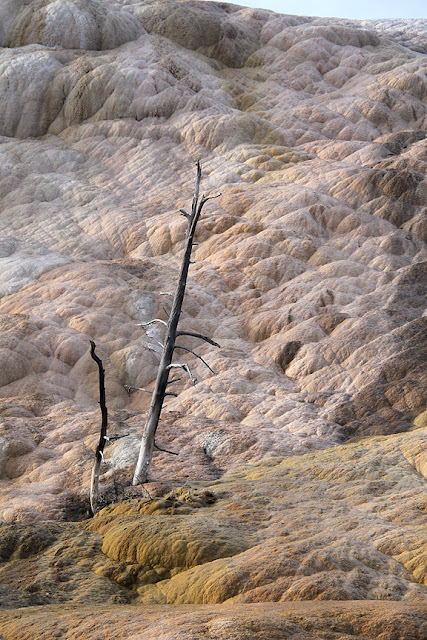 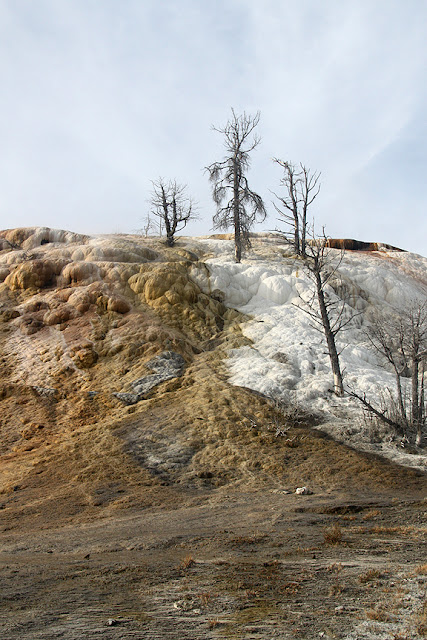 Around the backside a small group of elk cows and calves were gathered. There are a lot of elk in the Mammoth area--it's one of the few places occupied by people year-round, and the presence of people tends to keep the wolves away. The elk know this and so congregate there.


Ravens were everywhere in the park. I love ravens. We don't have them here in Southeast Michigan, so I soak them up whenever I find them. Not sure what this bird was doing--maybe getting a drink? Is the water even potable? I have no idea, but she posed nicely for a few shots before hopping away. 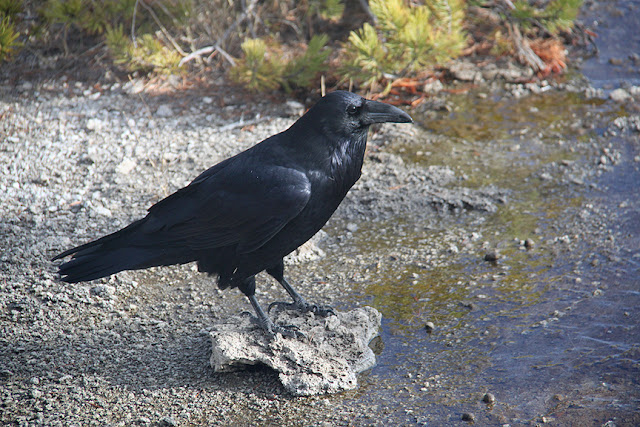 From Mammoth we drove east to the Lamar Valley, hoping to see some wolves. Past Tower Junction we came across a few pronghorn, very close to the road. What a treat to see them so close. They are fascinating animals, which I talked about in one of the Badlands posts (which you can see here). I believe both sexes have horns, so I assume this was a young one. 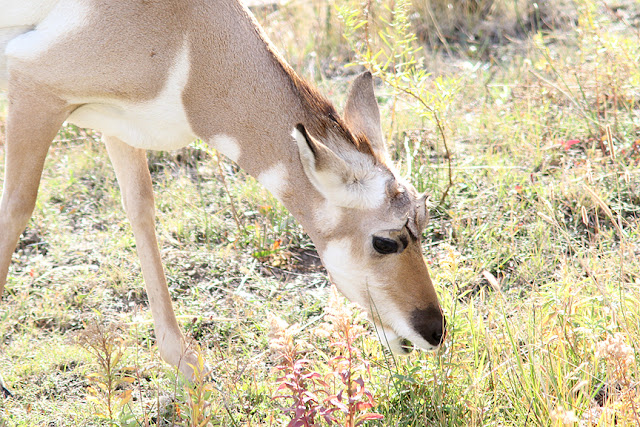 When we first came across this big guy, he had quite the tangle of dead vegetation stuck in his horns. 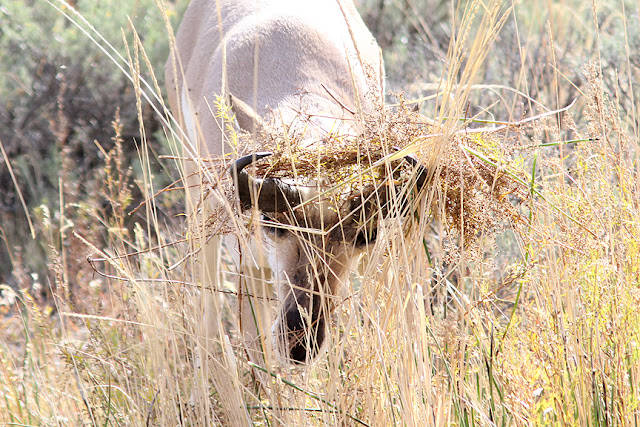 He did manage to free himself, and set about grazing near the van.

We pulled into one of the turnouts in Lamar and unloaded chairs and scopes and snacks, and hoped to catch a glimpse of some canines. We didn't see any, but we did get some really good information. One of the fellows who was watching told us that some wolves had been seen early that morning, but not since. It was thought that these were wolves from the Prospect Peak pack, which normally hung out in the Blacktail Plateau area, about 12 miles to the west, near Mammoth. He told us Rick McIntyre, who leads the Yellowstone Wolf Project, is usually at the Blacktail Plateau self-guided tour parking lot each morning, as the Prospect's rendezvous area is across the road from there, and suggested we join them the following morning.

I don't follow the lives and times of the Yellowstone wolf packs, but I need to make some time to do so. It's fascinating stuff, and one person we talked to likened it to a soap opera. We didn't have time to do any investigating prior to leaving on our trip, so we were at the mercy of those on site to fill us in.
But everyone we talked to was eager to share what they knew of the wolves. We decided we would get up early the next day and join the onlookers at Blacktail Plateau.


From there we drove east to Pebble Creek and had lunch, and I was finally able to do some birding. I added a Mountain Chickadee to my life list, though I did not get a photo of it. I somehow managed to not take any photos of the area at all.

On the way back towards Mammoth we paused in Lamar Valley, but there still wasn't any action. Past Tower Junction we turned onto the Blacktail Plateau Drive, a bumpy, rutted dirt road with a posted speed limit of 25 mph. We bounced along at around 10 mph, and I kept having to pull over to let others zip by. I honestly don't understand why one would bother with a scenic drive, off the main drag where one might see, oh, I dunno, WOLVES, if they are just gonna blast through it. But to each his own, I guess.

Being off the main road allowed us to slow down, stop often, and really enjoy the scenery.

The clouds, the afternoon sun, the golden glow of willow and aspen. It was almost too much to take in. 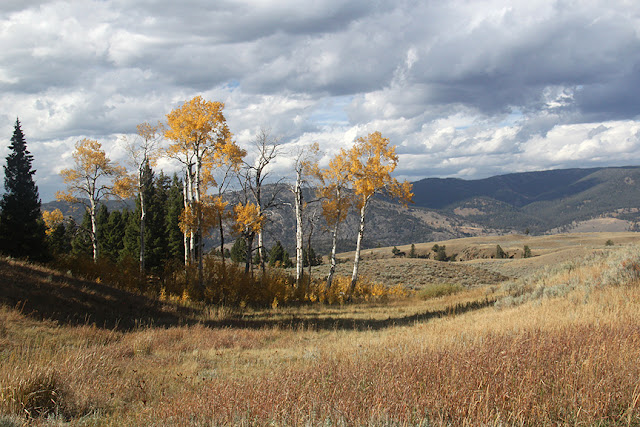 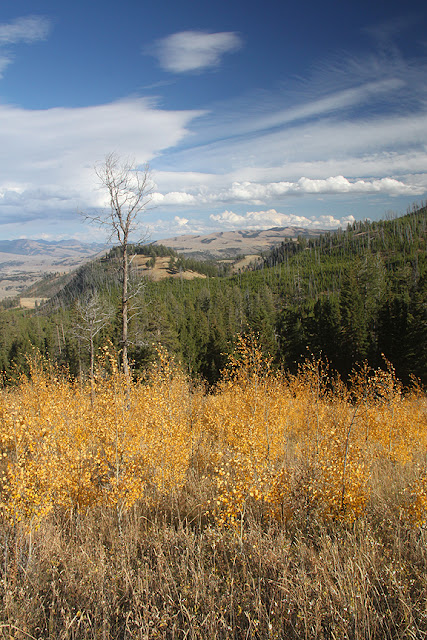 Along the way we spotted a few bighorn sheep on the side of a rock cliff. Can you see them?


Passing through a small wooded area we came across this jaunty fellow, filling up on seeds.

The photo below shows clearly the regrowth of the forests that were destroyed in past fires. It was remarkable, the change from nine years ago. Once barren hillsides were resplendent in green, with their forebears, ghostly grey, beginning to topple. 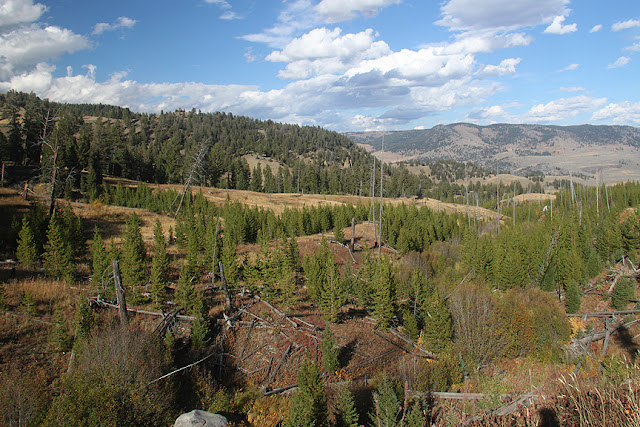 As we made our way back to Mammoth, we found ourselves in another bison jam. This one got us some good, close up looks.

A couple of bison, including this calf, were taking dust baths. 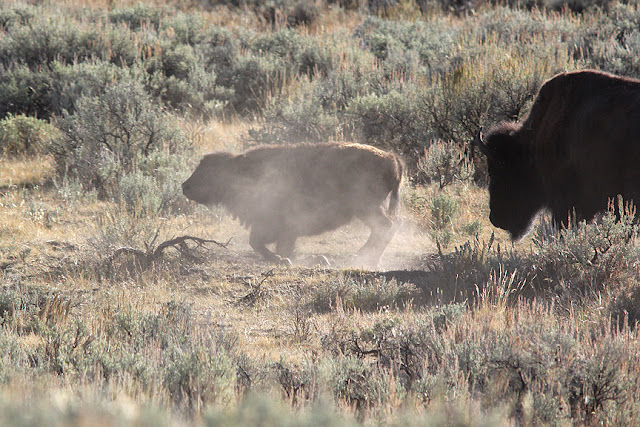 Back in Mammoth, the huge bull elk was laying down a short distance from his harem. The park ranger I spoke to said he's been in quite a fight earlier with another bull elk, and while exhausted, had emerged the victor. His neck and the sides of his face were matted with dried saliva, either his or his rival's.


Back at camp Lori sat outside to write while Lisa took the van and headed into Gardiner for a cell signal and to pick up a few groceries while I did dishes. There were a couple cows with a calf milling around the campground. That's the thing about Yellowstone--you are never far from some wild critter. 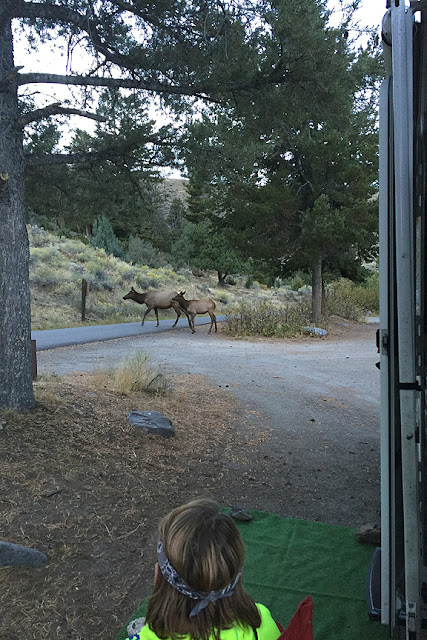