As we bounced along the road on a Denali National Park shuttle bus, we were on the lookout for wildlife. The bus was not overly crowed, which was really nice because I could move from one side to the other depending on where the critters were. One of the first things we saw was a small herd of Dall sheep on a hillside very near the road. Our driver stopped and we lingered for a while, watching the goings on.

It was June so there were, of course, babies.

They were a little rough looking, in the process of shedding their winter coats. I didn't mind--I'd never seen a Dall sheep and I was thrilled to get such close looks! 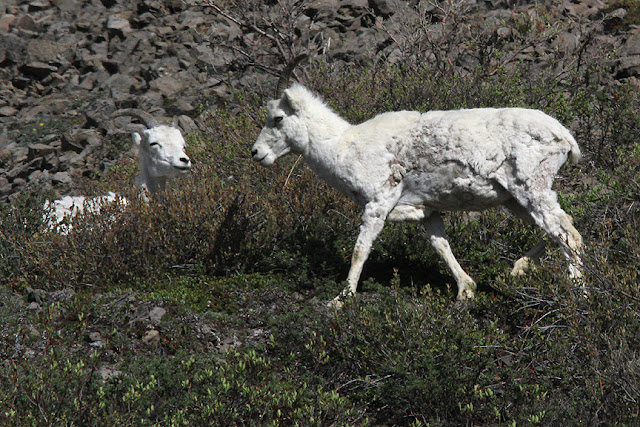 I initially thought this was a young male, but that didn't make sense after reading that the males hang out in groups with other males, and are only with the females at mating season. My assumption then is that this is a lactating female.


The little ones are awfully cute! 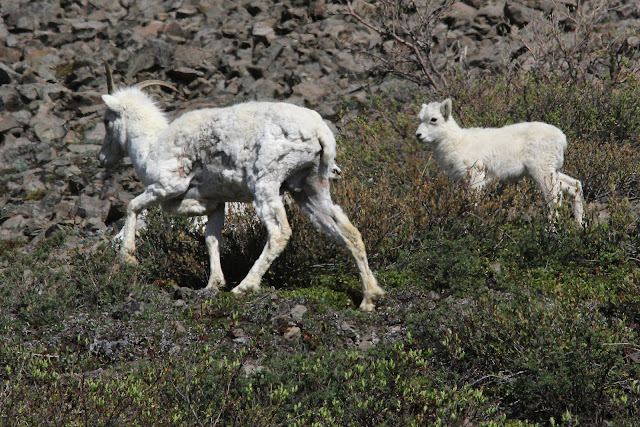 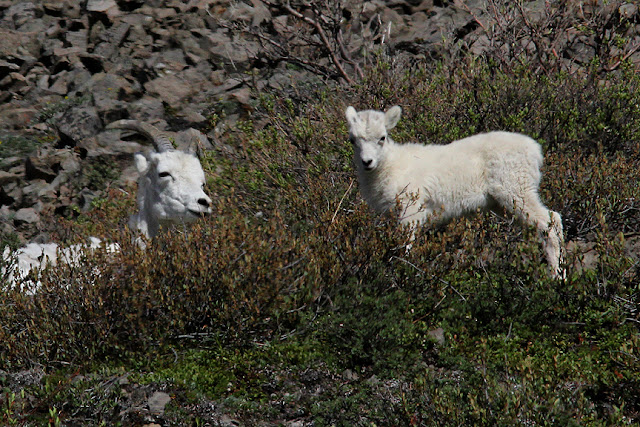 Both sexes of Dall sheep have horns, though it's only the male's that curl around. It takes about seven years for the horns to fully curl, at which time the rams begin to compete with each other for mating rights.

As we drove along the road we came across a pair of rams as they moved down the slope to a shrub right next to us. 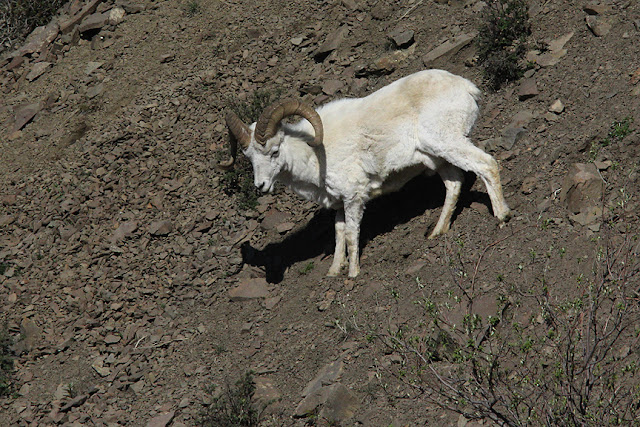 I had to switch lenses we were so close. It was hard not to squeal with delight. 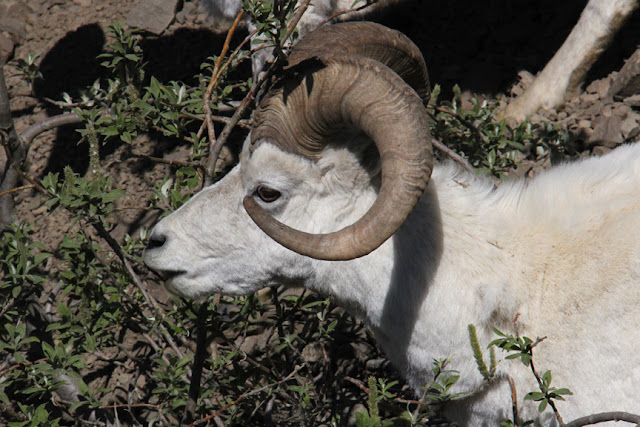 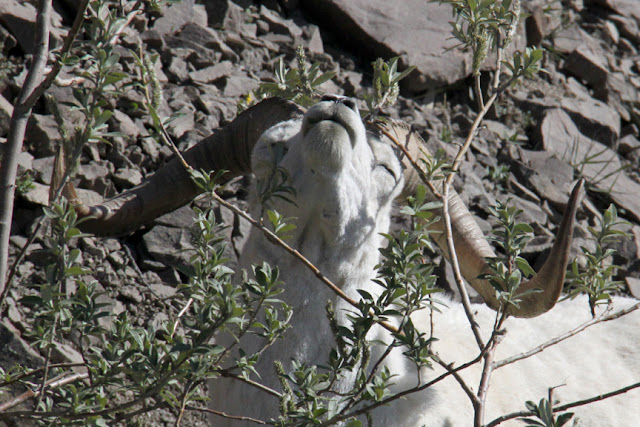 Evidently this is the only population of Dall sheep that is not hunted, and that still lives with large predators, so biologists study them pretty extensively. I also read that the park was established, back in 1917, to protect them from hunting, but I haven't been able to verify that. 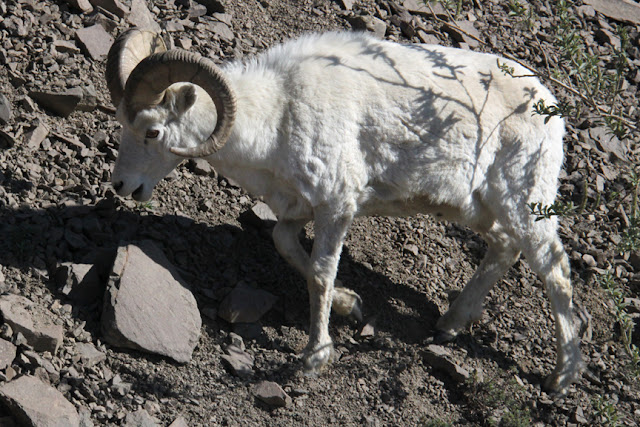 Unlike antlers, which are shed each year, horns are permanent, and grow throughout the life of the ram. Ewe's horns stop growing after a couple years, and do not curl like the ram's. 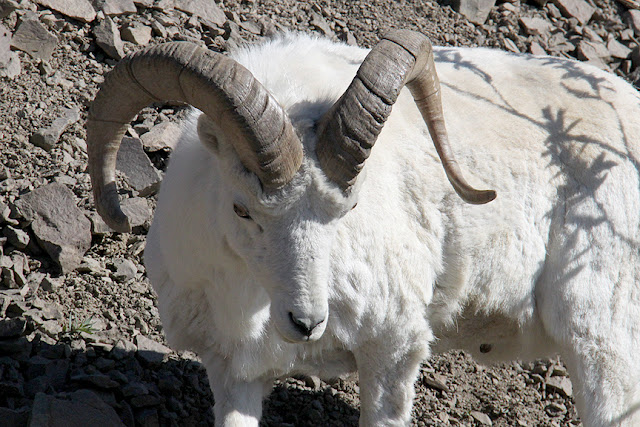 This magnificent fellow paused on the hillside for several great shots. I expect he will be a new art piece somewhere down the road. 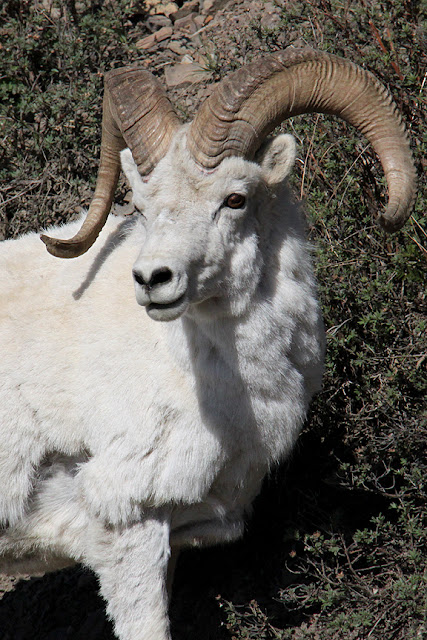 What can I possibly say about Denali? Words are not enough. While I was only there for a day, and viewed it primarily from a bus, it has left such an impression on me. The whole state did, really, but this place....  The National Park is two million acres. Two MILLION. Add to that the four million acre refuge surrounding it and you have a whopping SIX MILLION ACRES of protected land. This is about the size of the state of New Hampshire.

We arrived at the park early and boarded a bus that would take us to the Eielson Visitor Center and back, a round trip of 132 miles. The shuttle bus service is pretty much the only way to enter the park past the Savage River--private vehicles are not allowed, and you have to take a bus, bike or hike past that point. The park has a short season--May to September--and over 300,000 people visit in that time. Allowing cars in made for an awful mess of traffic, so shuttles were implemented.

Unbeknownst to me when we departed, you are allowed to disembark pretty much anywhere in the park, except for areas closed due to nesting eagles and bears with cubs. You just stand up, holler "Stop!" at the bus driver, and they will pull over and let you out. You can wander around, then when you're ready, you walk up to the road and flag down the next bus that comes by. Wow. I don't know if I would have taken advantage of this had I known about it, but I was not prepared for hiking in the Denali wilderness, so had to be satisfied with the shuttle bus.

The shuttles will also stop for wildlife. Again, if you spot something you holler stop, then give the driver coordinates and what you think you saw--"Grizzly, two o'clock!" They allow us to lower windows to get photos, but ask that everyone be quiet. This is an attempt to not habituate the wildlife to humans. They know the bus, but maybe not that it's full of gawking people, and the park wants it to stay that way.

One of the main draws to Denali is to see Mt. McKinley. It is visible periodically throughout the tour, first at mile marker nine. We were thrilled to see it there, cloudless. Woo hoo! 30% Club here we come!

The road into the park passes through tiaga forests up into alpine tundra. It's arid and wet at the same time, with much of the park relying on melting snow to keep the streams running. There was not a bad view in the place.


As we wound through the park, the mountain loomed larger at each viewing area. Here's what Wikipedia says about the mountain:


"Mount McKinley or Denali is the highest mountain peak in North America, with a summit elevation of 20,237 feet (6,168 m) above sea level. At some 18,000 feet (5,500 m), the base-to-peak rise is considered the largest of any mountain situated entirely above sea level. Measured by topographic prominence, it is the third most prominent peak after Mount Everest and Aconcagua. Located in theAlaska Range in the interior of the U.S. state of Alaska, McKinley is the centerpiece of Denali National Park and Preserve."

As we neared the visitor center, a lenticular cloud began to form above the highest peak.


While McKinley dominated the landscape, it was not always in view--and not always the prettiest thing out there.

At miles 30 and 53 the bus stops for 15 minutes for bathroom breaks and some quick explorations. At one of the stops there was a large tent set up with gifts and books and stuff. There are also two observation stops where clear views of the mountain can be had. I think this was taken from the Stony Hill Overlook. McKinley was still cloudless!


By the time we reached the Eielson Visitor Center, clouds had begun to obscure the mountain. We spent about a half an hour here. A few from our group actually went looking for birds, but I hung behind, taking in the center and the views because, well, this.

As we headed back, more clouds descended upon the mountain. I was very glad we'd gotten out so early and had a chance to see it unobstructed.

Next we take a look at the park's wildlife.