Day five of our ten day birding tour of Alaska was a very full day, to say the least. We started the day at 7 am with a quick breakfast, then drove the spectacular Sterling Highway along Cook Inlet from Soldotna to Homer, where we were treated to amazing views of five volcanoes. Then three-plus hours on a boat in Kachemak Bay where we saw a stunning array of pelagic birds and, of course, sea otters.

We left Homer around 3:30 pm and drove back north along the Sterling Highway. There's no direct way to get from Homer to Seward as there are three large lakes and this little thing known as the Harding Ice Shield between the two. Then again, in Alaska, this is about as direct as it gets.


We stopped again at Anchor Point for a late lunch. The tide was out but there were still very few Bald Eagles on the flats. Fishermen use the launch here and often leave gut piles from their fish on the beach, but apparently the pickings were slim this day.

I took five minutes to just lay in the grass at the picnic area, soaking up the sun and relaxing, and to admire once more the view of Mt. Redoubt. I had never seen anything like it.

I don't recall there being many songbirds around, but there were a number of crows. I didn't think right away to get pics until I realized this was a new bird for me. Duh!

The rest of the drive to Seward seemed to take forever. We got caught up in traffic as there was some construction on the two-lane highway. While we waited we rolled the windows down and someone heard a Townsand's Warbler on the side of the road. Bill wouldn't let us get out and I couldn't see it from where I was sitting, so I couldn't count it for the day.

We finally arrived in Seward around 7:30-8:00 pm. We checked into the Holiday Inn Express, then walked over to Chinooks for dinner. What an amazing view of the marina and the mountains beyond Resurrection Bay.

After dinner about half of our group climbed back in the van to do a little late evening birding. There is a woman north of town who puts out many feeders and brings some interesting birds in, like the Rufus Hummingbird. On the way we stopped at a marshy area to look for waterfowl. The lush greens and dark spruce with the snow-tipped mountains and blue sky were painfully beautiful. We got out for a little while to enjoy the serenity of the place.

We didn't see much here, just a pair of Ring-necked Ducks and a pair of Trumpeter Swans. Mama was on the nest but dad was a bit closer to the road, preening and stretching.

There wasn't much to see at the feeders. We didn't get out of the van--who wants a group of gawking birders in your front yard?--but we did see a couple female Pine Grosbeaks, among some other more common (for us) birds like Downy Woodpeckers. But on the way back we stopped on the side of the road near some spruce and managed to entice a Varied Thrush to come for a visit. It's a lousy photo but it was a first, so....

Next: Day six, and an all-day boat trip on Resurrection Bay!!


Going to Alaska was a dream come true. There's no question that Alaska, and the northern latitudes in general, are our most wild lands. When I signed up for the trip I was excited to see birds, but I was also hoping that I would see much more. The trip did not disappoint.

Shortly after we left the marina in Homer we could see several rafts of some critter floating near the north shore of Kachemak Bay. We were too far away for me to tell what they were, but I overheard Captain Karl mention they were sea otters.

No way. No way! I was so excited, yet bummed that they were so far away and that we were not moving in that direction.


But within 10 minutes, a dark shape appeared off our starboard side. I got the camera on it and began shooting. It finally looked our way before diving under the water.


A few minutes later another one appeared--or maybe the same one? 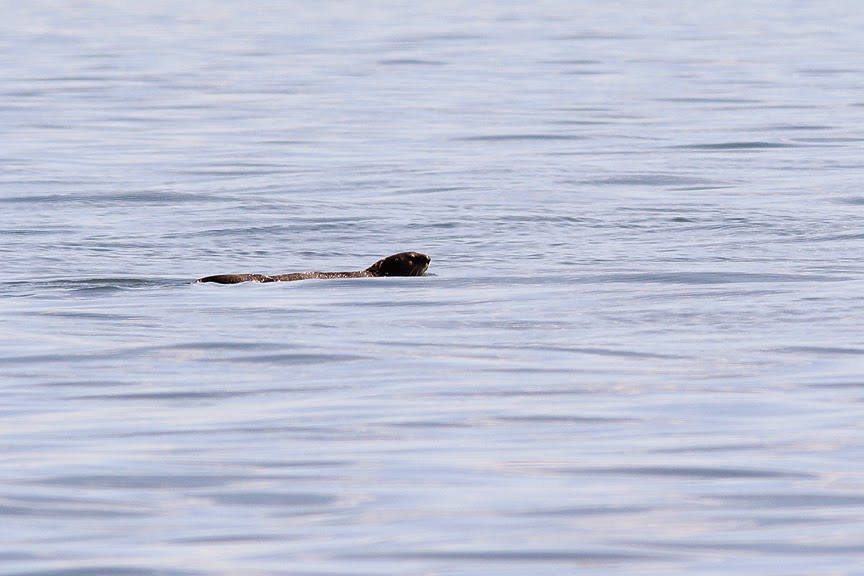 And then this, much closer to the boat, laying on its back in the water, doing its otter thing. 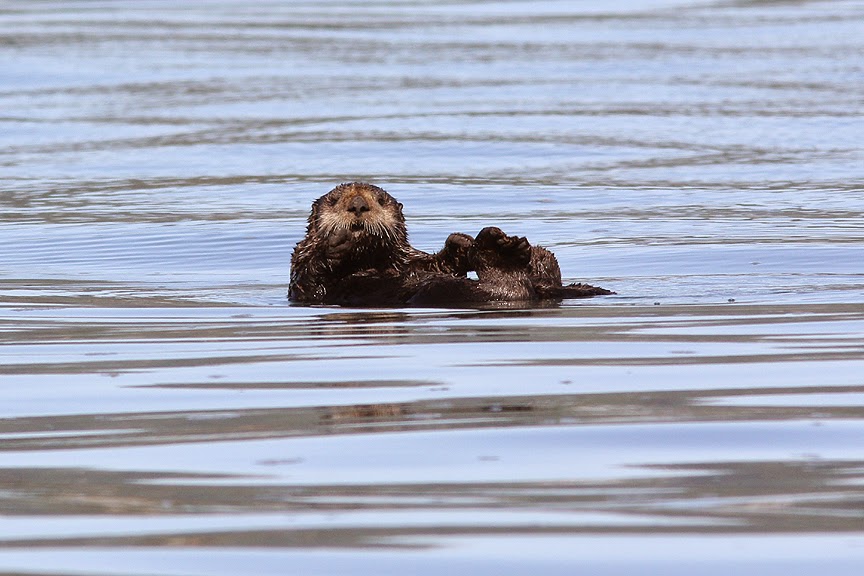 We drifted closer, and we watched each other with fascination. The boat listed to starboard as everyone crowded around to get a look. 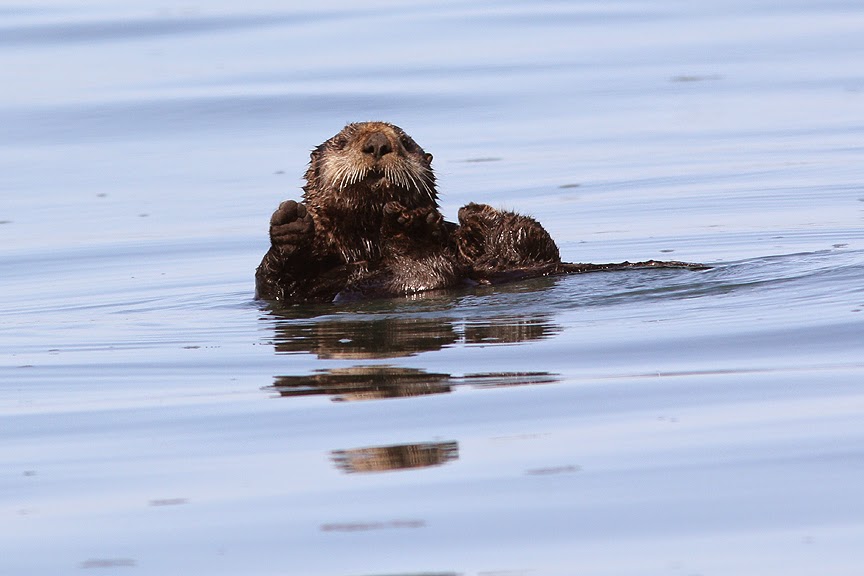 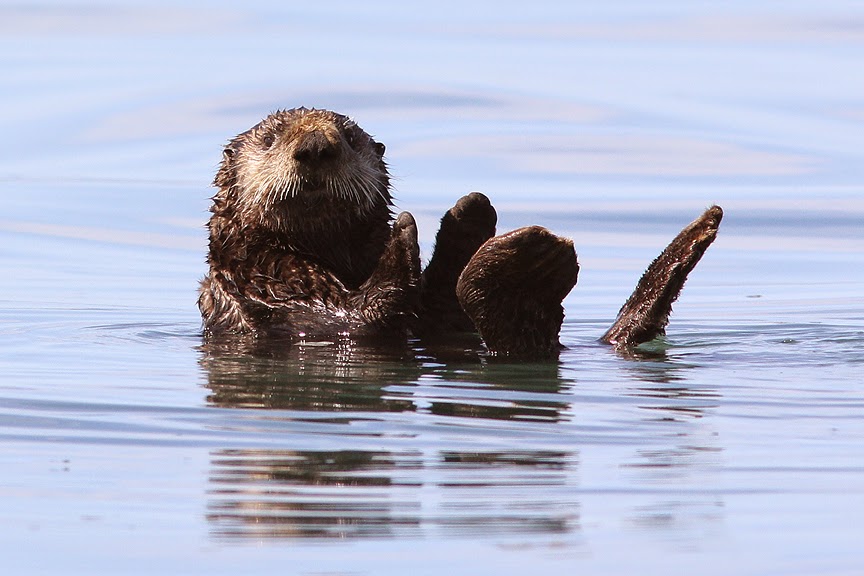 Here are some sea otter facts, as presented by Defenders of Wildlife: Sea otters live in near-shore environments in the northern Pacific, from Japan and up the Russian coast over to Alaska and down to northern California. They eat 1/4 of their body weight each day to support their high metabolism. The largest member of the weasel family, they have the densest fur of any animal, which is what keeps them warm--they do not have a layer of blubber. They must spend a great deal of time maintaining that coat. Their fur is thinnest on their feet, so when they are floating in the water they hold their feet up to keep them warm and maintain overall body temperature.

Sea otters are a keystone species, meaning they maintain good ecological balance of their habitat. Without otters eating the things that eat kelp, the things that eat near-shore kelp beds would multiply exponentially and wipe out the kelp. The kelp provides shelter and food for many other animals, so keeping a healthy population of sea otters protects the environment.


We made our way farther out into the bay and out of the shelter of Homer Spit. The breeze picked up a bit and the water got a little choppier. We saw the pair of Aleutian Terns on their log and then, on our port side, we came upon this pair, a mother with a pup. We could not have asked for a better view. 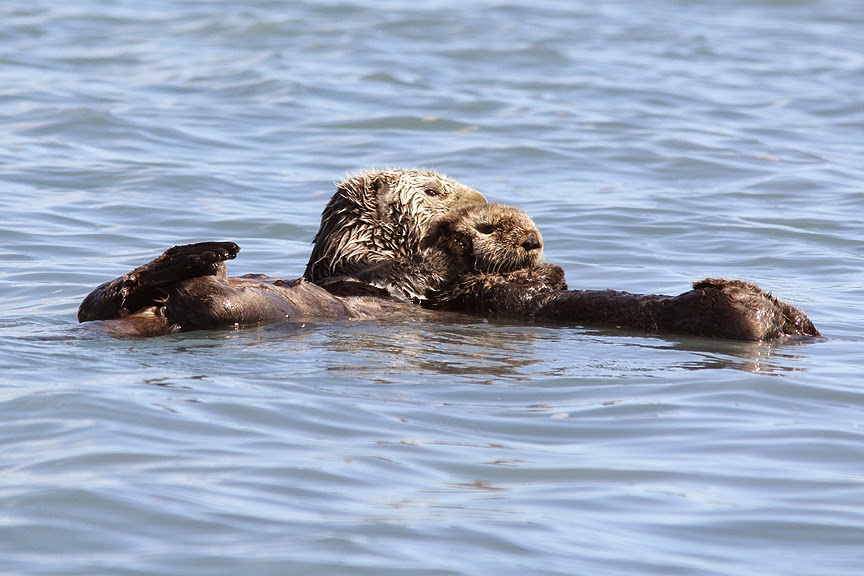 We floated alongside them, not more than 20 feet away. Mom held junior's head in her paws, and occasionally groomed the pup's head and neck. 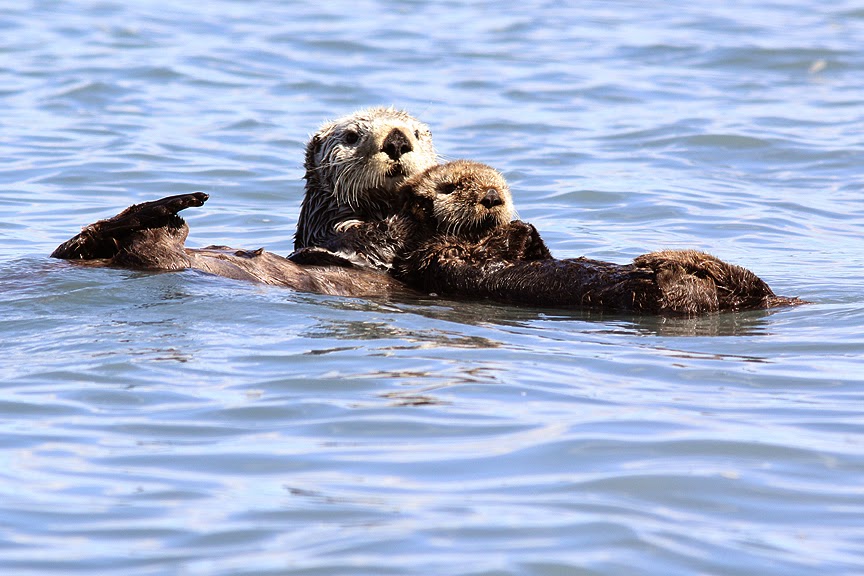 It was absolutely a dream come true. 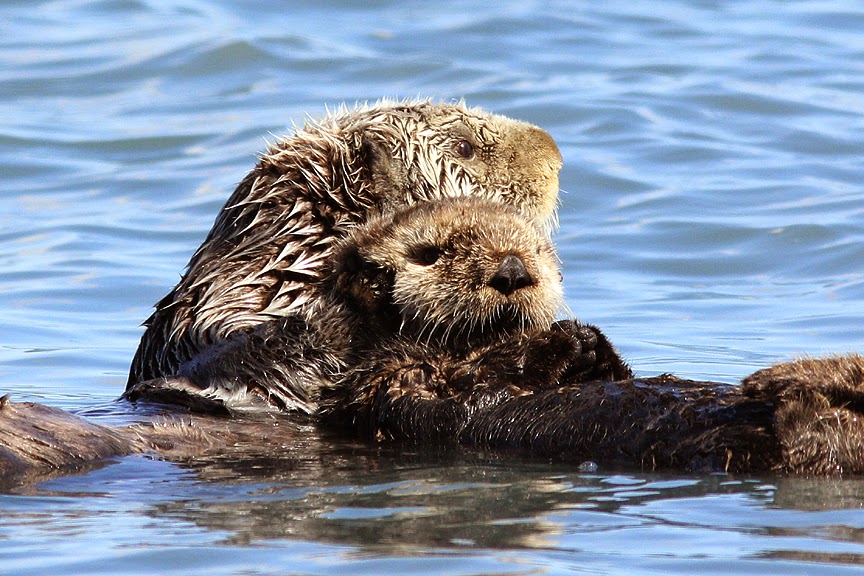 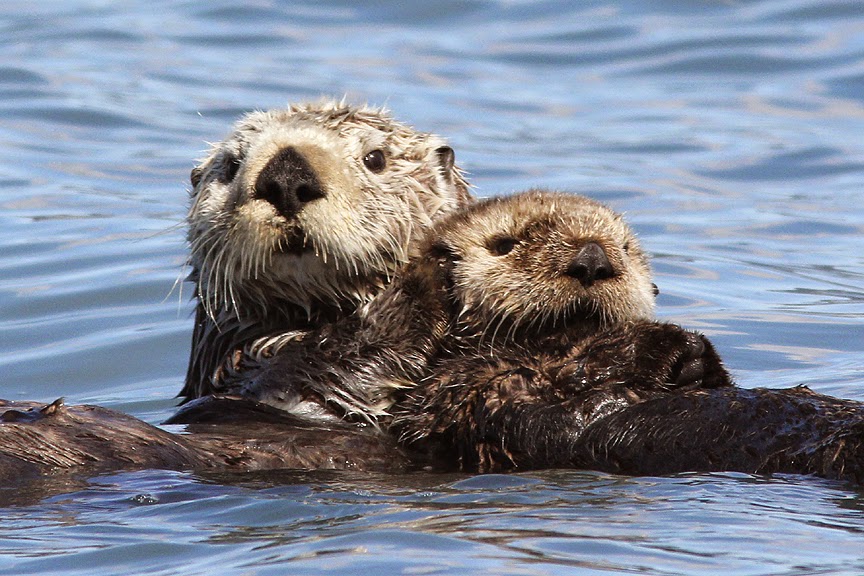 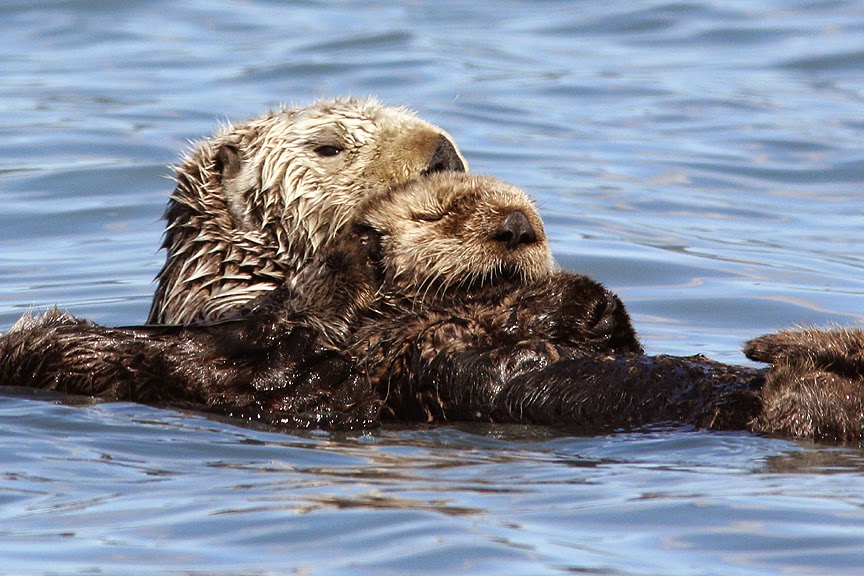 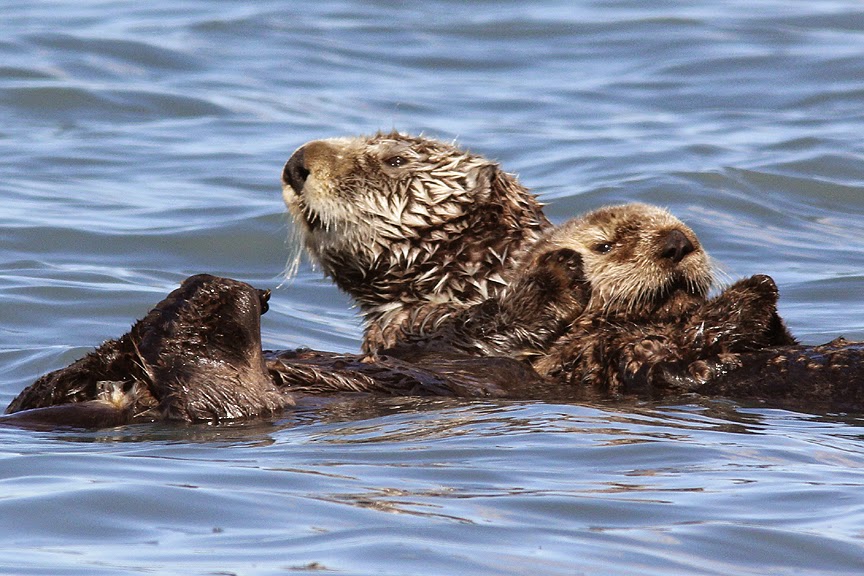 There are some things--many, many things--I never expected to see, never really thought I'd have the opportunity to experience. This was one of those things. To see these adorable creatures in their natural environment, to be out on the water on a cool, sunny day surrounded by snow-topped mountains with a group of like-minded people all in awe of what we were seeing.... This was one of my best experiences. 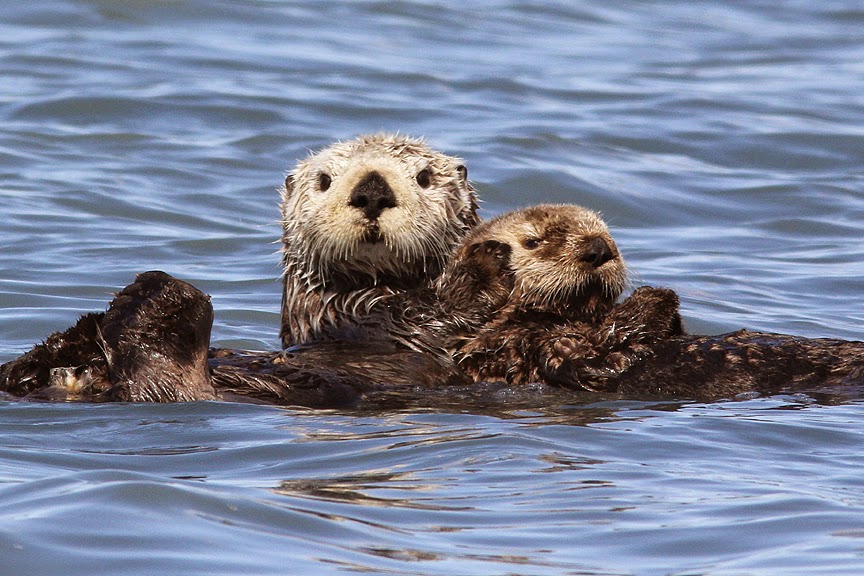 Next: Day 5 is not done! From Homer we travel to Seward, do a bit of birding in the evening, and prepare for a day on Resurrection Bay.
Posted by Marie at 11:35 AM No comments: