After a grueling six-shows-in five-weeks schedule, we had planned a short vacation in Michigan's Upper Peninsula. Our original plan was to go back to Pretty Lake, in the Superior State Forest, (you can read about it here), but to do any paddling there required portages, and we had our two beagles with us--I love my dogs but I didn't want to portage two kayaks and a canoe and two dogs. Three times. And then three more times back.

After a little searching I found a whole bunch of campgrounds along National Forest Road 13, which runs south from Wetmore down to U.S. 2 between Escanaba and Manistique, neatly bisecting the Hiawatha National Forest. Widewaters campground seemed to particularly suit us--it lies on the banks of the Indian River where several ponds and a lake were accessible, and a day trip down the river could be done, all without portages. I was looking forward to four days of balsam fir, black spruce, and hemlock.

We rolled into the campground a little later in the evening than I'd hoped, having had to sit out a storm on the way up, and find a UPS drop box to take of a little business along the way. I didn't manage to get my canoe in the water until the next morning, but oh what a morning! It was just before dawn, and the warm waters breathed mist into the cool air, the moon, a few days past full, shone on its surface, and just as I was launching my boat, an eagle flew right over my head. I'd heard loons in the distance and decided to paddle to Fish Lake, hoping that's where they were.

I think I can honestly say that it has not been since I was on the tundra in Alaska that I have been in a place that was so quiet, so devoid of human sound. Sure, there were occasional trucks on the main road, and a few planes now and then, but even the campground was pretty quiet. For me, that's a big part of any outdoor/nature experience--to be able to hear it, not just see it.

To get to Fish Lake from the campground you have to paddle up river about a mile. Fortunately most of that is wide and the current light. As I past through the first pond, I found a young frog floating way out in the middle. I wasn't sure if it was alive, but I paddled back anyway, and as I approached, the little guy tiredly swam towards the canoe! I scooped him up and set him on the foam sponson, and took him over to a partially submerged tree. He posed nicely for a photo.

As I paddled west and south into Fish Lake, the sun was shining on the far shore, and just starting to light up the islands. The water was still and clear and clean. Birds sang from the trees. I floated, taking it all in. Then I heard the loons.

There are five islands in Fish Lake, with the largest in the middle where there is a backcountry campsite. It was occupied, but no one seemed to up yet. I couldn't imagine sleeping in on a morning like this. On the far side of the island, I found the pair of Common Loons. I was surprised to see they didn't have a chick. It was the second pair we'd seen since being up north without a chick, and I hope that their lack of success wasn't due to stupid human behavior, like we've seen so much lately in our National Parks. I hung out with them, enjoying the morning sun, then took my time heading back to camp.


In addition to paddling and fishing the lake and ponds along the river, there is a ten mile loop trail called Bruno's Run that is open for hiking and mountain biking. It crosses the river twice, so essentially encircles the campground and surrounding area. One hot afternoon we walked about a mile of the trail, and sat for a while along the river, down downriver from the campground, which had grown a bit rowdy with children playing. Fungus and mushrooms were starting to emerge, along with the bizarre Indian Pipes, a plant that lacks chlorophyll and so grows without any green coloring.

Pretty little mushrooms dotted the trail, like this fly agaric, and the chanterelles below.

I grew up on the east side of a decent sized lake, and got to see the sun set all year round. So it's always a treat for me to be on water where the sun can end its day in such glory. The boat launch in the campground provides an excellent place to see it from.

The morning before we were to leave I paddled out for the third and last time to Fish Lake to visit the loons. The campsite on the island was unoccupied, so I stopped to take a look. I have decided that this looks like a wonderful place to do a self-made "artist-in-residence." I mean, look at that view! There's a fire ring with grill, a picnic table and latrine (although the last campers seemed not to have used it much, based on the number of piles of paper towels, and other unmentionable piles, there were on the way to the latrine). I don't know if I have time yet this year, but I would want to camp here when the loons are still present, to spend a week or two surrounded by their songs.

Leaving the campsite I paddled to the south end of the lake, but didn't see the loons. Turning back I finally spotted one near the island I had just left. As I paddled out, it swam in my direction and we met in the middle. It seemed pretty unconcerned about me, but did yodel once. I wondered where it's mate had gone. Within a few minutes, the loon started making what I can only describe as soft coughing or barking sounds. I'd never heard that before. Then movement caught my eye and I looked up to see it's mate fly past. The bird made a circle around us and I got some shots before it was out of range. It kept flying to the far west side, when I realized what it was doing. It banked before it reached the trees and began descending farther and farther until its toes brushed the water. Its tail ruddered down, and the loon did a belly flop landing about 75 feet away.

It quickly joined its mate, and the two birds preened and fished together.

Early that afternoon we paddled down the Indian River from the campground to the Tommy Paige Bridge take out, about a three hour paddle. We packed a lunch, loaded up the beagles, and set off. We had no real idea what to expect. The river is supposed to easy, but it is also a designated a National Wild and Scenic River. What that means is when there are deadfalls across the river, only enough is removed to allow canoe passage. While it wasn't the first time I'd paddled a river solo in my canoe, it was certainly more challenging than I had anticipated. There are a few spots on that stretch where there is some fast water, and I bottomed out several times on the rocks. I was happy when it was over that there didn't seem to be any damage to my aluminum canoe.

I'm not really sure what the dogs think about being in the boat. Stanley, who is usually pretty restless, likes to wander around.

Cooper, who likes to sleep, eventually finds a place to lie down. This time it was under the front seat, and I managed to drape a towel over it and the thwart to give him some shade. 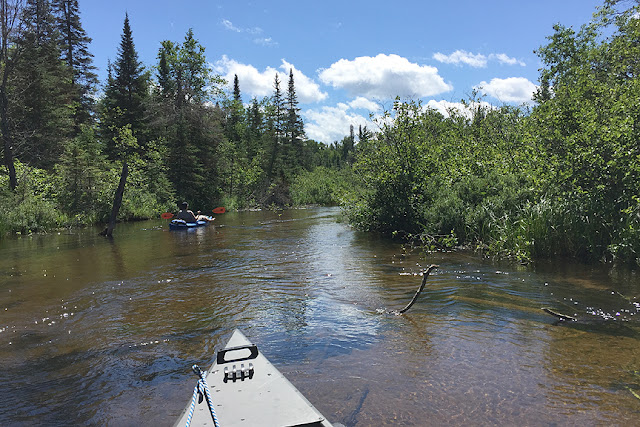 For all its twists and turns and bumpy bits (I could see it being a real challenge during a dry summer), we made it out unscathed, and posed a requisite selfie near the end of the trip.

We loaded the boats on the trailer, went back to camp and cleaned up a bit, then drove into Munising for an early dinner. There had been reports of a wayward Crested Caracara, a bird generally found in Florida and Texas, just to the east of town. We had failed to find it the day before, but I wanted to try one more time, a bit later in the day. I was in luck! I spotted the bird in a small tree near the Lake Superior shore. I got some shots, and both Lisa and Lori got to have a look before he flew away.