The drive from Seward to Wasilla was punctuated by several stops for birding. Traveling up along Turnagain Arm, a branch of Cook Inlet, we stopped at a roadside park where a creek flowed under the road, and found a pair of fledgling American Dippers sitting on a log. We never did see an adult. If you're not familiar with the dipper, it is the only aquatic songbird in the U.S.  That's right--the dipper feeds entirely on what it catches underwater clean, swift-moving streams, which is about the craziest thing I've ever heard. (If you'd like to see the bird in action, follow this link. Notice how the bird nearly always faces upstream.)


We made another stop near Anchorage, at what I think was a ski park, and walked the trails there after having lunch. I don't recall exactly what we were looking for, but I got another great look at what was one of my target birds, the Boreal Chickadee. I'm pretty sure nothing so cute has ever lived.

The big birding spot of the day was Westchester Lagoon in Anchorage. This pretty, public park surrounds a large pond which has a small island. It was in the 60's, sunny, but breezy. Even so, the Alaskans were out in number, dressed in shorts and t-shirts and enjoying the sun. You could tell us apart from them because we were all in jackets and long pants.


Right off we got great looks at an Arctic Tern sitting on a post near the boat launch.

A mother Mallard took to the water with her brood as we approached.

Bill pointed out a small flock of Hudsonian Godwits resting on the shore of the island. The lighting was terrible for photos but I was excited anyway as these were a new bird for me.

While there wasn't the abundance of waterfowl that Bill would have like to have seen, what was there was pretty close to shore, probably used to being fed. I got some nice shots of a Lesser Scaup preening. 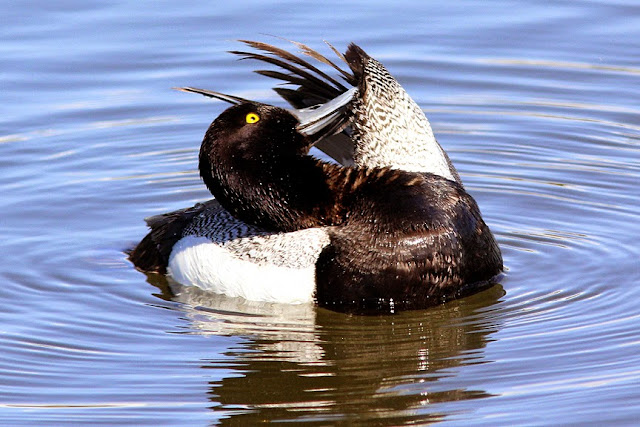 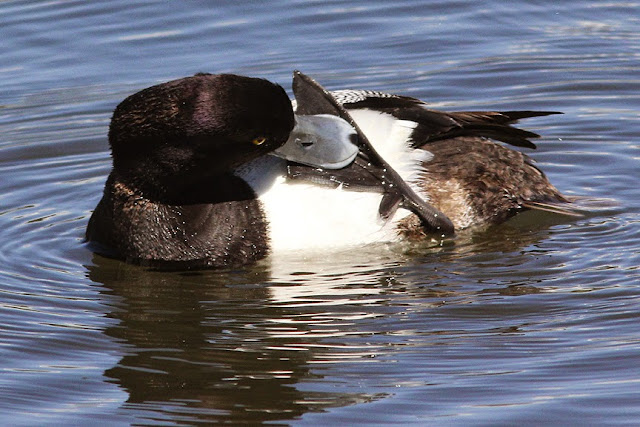 This pair of Greater Scaup floated by too.


A Gadwall also made an appearance near to shore. While none of these were new to me I was quite happy to get some really nice up-close photos.

We finished the day with a drive up to Wasilla, where we stayed at the Best Western on Lucile Lake. After dinner I crashed on the shore, utterly worn out. The short nights and busy days were starting to get to us all. I really wanted to climb in a canoe and paddle to the middle and sleep. We saw Lesser Yellowlegs on the hotel dock and several pair of nesting Red-necked Grebe, and heard Common Loons calling from across the lake. It was a picture-perfect evening. 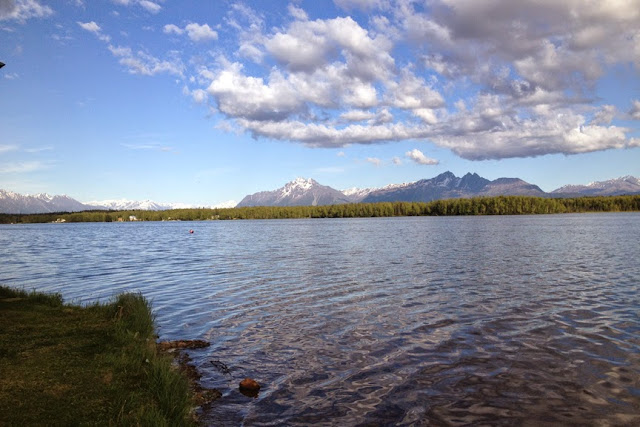 As had most of our Alaska tour since leaving Nome, Thursday June 5th dawned bright and clear. We gobbled down breakfast and climbed in the van for a trip to Exit Glacier, whose terminus is fairly close to Seward.

Exit Glacier is part of the Harding Icefield, and comes down off the mountains to the north. Its outwash plain feeds Exit Creek, which drains into Bear Creek, and on to Resurrection Bay. This is the only part of Kenai that is accessible by car, and there are two trails--one leading the glacier itself, and another leading up to the Harding Icefield.


While we were looking for birds here (the Grey-cheeked Thrush comes to mind) I was much more interested in the scenery, which was as usual spectacular. It seems you can't be anywhere in the southern two-thirds of Alaska without having snow-capped mountains within view.

As with most glaciers these days, Exit is in retreat. There were signs everywhere--made-made as well as those left by the glacier itself--that showed its past. Rock scoured and scored by the glacier's push were visible throughout the area.

As the glacier retreats, plants slowly fill in the bare areas left behind. You can read about plant succession here, but in a nutshell, as the glacier retreats the first plants to move in are mosses and lichens, followed by herbaceous plants. These help anchor the thin soils while adding humus. Next shrubs appear, once there is enough soil to support them, and then trees will become established, usually fast growing, short-lived species first, followed by longer-lived species. In the photo below you can see areas of bare rock nearest the glacier, where plants have yet to get established, followed by low vegetation and then shrubs.

Several things served as a stark reminder of the glacier's retreat. One was this sign, which marked the glacier's terminus just 20 years ago.

The other is this sign, which is also a PDF currently downloadable from the National Park Service. It shows the glacier's tip reaching the outwash plain, but now the tip of the glacier barely reaches the end of the trail (see where it says "Edge of the Glacier" middle left). It has also shrunk considerably side to side.

We hiked up the trail to the edge of Exit Glacier, and there it was, looking somehow forlorn. There was a tremendous amount of melting going on, creating some whitewater in the streams leading to the plain.

I hung back from the group, as I often do, looking a little closer at the landscape. I like this image for scale. The end of the trail brings you within about 50 feet of the edge of the glacier.


Finally I made my way to the end of the trail.

Once again, I was gobsmacked.


Next: We drive from Seward to Wasilla, with a few stops along the way.

It is not lost on me that my trip to Alaska was a year ago already, and I'm only halfway through blogging about it. So many other things are going on, so many other places to write about, but I just can't keep up! I will be gone for several weeks in June, doing shows in the Midwest, so let's see if I can get through a few more posts before then.

Our tour of Resurrection Bay and the Northwestern Glacier was without a doubt one of the highlights of our trip. It was, however, much better for mammal watching than for bird watching, although we did see some spectacular birds. I'm saying this mostly from a photographer's standpoint--it was difficult to get good pics from such a large boat. The tour of Kachemak Bay from Homer was much more intimate and we got better looks at the birds, but I would not suggest skipping the Kenai Fjords tour if you're reason for being in Alaska is to bird. It was just too spectacular to miss.

In all I counted 32 species on Wednesday, including the ten we saw on our early morning walk in Seward (asterisk denotes new species):


On the boat tour I added sixteen species, four of which were new:

Once we were back on solid ground and had eaten dinner, we visited Ava's Place, a private residence outside of town. This woman has a whole bunch of feeders that bring in a whole bunch of birds. We had stopped by the previous evening looking for the Rufus Hummingbird with no luck, so we returned Wednesday, and this time got lucky.

Next: We visit Exit Glacier before heading up to Anchorage and Westchester Lagoon.