It is said there are no selfless acts.  That everything we do, no matter how generous, is done for our own satisfaction.  We give gifts because it makes us feel good.  We feed the birds not because it is good for them and helps them to thrive (which it does) but because we enjoy their presence and are rewarded by the good deed.

As I write this there is a huge hole in my heart. This past Wednesday, right before we left town for an art show up north, we had our dog Jackson euthanized. (I don't like the term "put to sleep". He's not sleeping, he's dead.) Euthanasia means "good death". I am not sure how good it is to be killed by a needle and fluid pink as bubble gum, but I guess it's better than a myriad of other ways one could die.

Jackson was old for a big dog. At 12 he had some physical issues, mainly arthritis in his back that was causing weakness in his hind legs, and at 74 pounds that was a real problem. He was starting to have trouble getting up, and he would eventually develop problems defecating. He had developed a distended abdomen too, and while the vet had not palpated any tumors and his appetite and bowel function were fine, we were concerned. But our finances didn't allow for a lot of diagnostic work--a full blood panel is expensive, X-rays are often inconclusive, and my experience with older animals is that even if you diagnose a problem, treatment is often ineffective, invasive, crazy expensive, or all three. So we elected to watch him closely for signs that he was in obvious pain.

Jackson was a lucky boy from the get go. He was a shelter dog twice--adopted as a puppy, he was returned at eight months old for reasons I no longer recall. At that time we had a cattle dog mix named Tucker, an odd dog to say the least, with whom I never really bonded. He was a stand-offish sort, wary of people, and probably with good reason--we can be real creeps when it comes to our pets.

We had been throwing around the idea of getting another dog as a companion for Tucker when Lisa decided on a whim to visit the humane society. She found a dog she thought might be a good fit so when I got off work we drove back out to the shelter. We walked that dog and several others but weren't real excited about any of them. Then she pointed out this hound mix who was laying quietly at the front of his cage, big soul-full eyes gazing up at us. He didn't have any information on his cage so we went up to the front to inquire.

To our surprise, we were told he was slated to be euthanized, and was in fact being taken back that very moment. They brought him up to us instead, and we took him outside, and his joyful enthusiasm won our hearts. He howled the whole way home, riding in the back of the truck (it had a cap), and pooped and peed on our golf bags. His name was Tyson, which we didn't like, so we changed it Jackson, after the country singer Alan Jackson thanks to the way he howled on the ride home.

While he had some habits that were annoying (don't we all) he was a great dog and a wonderful companion. We could let him out onto our unfenced property and he wouldn't run away. He knew not to chase skunks or deer but that the neighbor's cats, laying in wait under the bird feeders, were fair game. He loved to play ball, although we pretty much quit that last year as he kept coming up lame. But the thing I loved the most about Jackson was his obvious love and affection for us. And after Tucker died several years ago, I felt I finally bonded with Jackson.

This past Wednesday, July 3rd, I was in the basement matting prints for my show this weekend. The dogs (we recently adopted an elderly beagle, but that is another story) were passed out on the floor, exhausted from a car ride and walk we had taken that morning.  But around 11:30 I turned around to find Jackson standing behind me, head thrust forward, eyes sunken, heaving very short, deep breaths. My heart sunk. I knew something was seriously wrong, and that this was the beginning of the end.


He sunk to the floor and lay in a rather awkward position, clearly in pain. His gums and ears went pale. I called the vet, who said yes, bring him right in. I tried to help him walk to the van with a towel under his chest as a sling, but his back legs weren't working right, so I picked him up and carried him out the door.

Our vet took one look at him and told me what I already knew--that this really didn't look good, and that even with a battery of tests the chances that this was something that could be repaired were slim. We will never know exactly what went wrong. Our vet suspects a ruptured tumor, perhaps on his spleen, and that we was bleeding out into his abdomen. Whatever the case, we decided then and there to end his life, and within 45 minutes of him collapsing on the basement floor, he was dead.

Knowing that we gave this dog twelve years he would not have otherwise had does not make having him euthanized now any easier. It hurts, plain and simple, and it is a deep hurt that has no remedy. While I am not one to drag out the life of an old, sick pet with surgeries and medications, I wonder if I should have done more for him. But then I stop and think, for whom would I really be doing this? Would it be for him, who now spent his days sleeping or just laying around the house, who no longer played ball, who seemed to me to always be in a state of discomfort, even with a daily aspirin? No, extending his life would not have been for his benefit, but for mine.


To keep a pet alive when they are clearly suffering, are past the point of finding joy in life, is repulsive to me. We extend the lives of our loved ones not for their benefit but for ours, because we can't bear the pain of being without them. We are cowards, afraid of our own pain and loneliness and heartache.

To me, choosing euthanasia is the one and only selfless act. Choosing to take the life of another knowing the pain it will cause us is perhaps the one choice we make that never, ever leaves us feeling good. No matter the degree of suffering a cherished pet may be enduring, euthanizing that pet will never make us happy or bring us joy. Yes, we can rationalize and say it was necessary, that they are in a "better place" or at least now without pain, but our hearts are broken, and will never be completely healed.

Part of me is glad it happened so quickly. I am glad that he didn't slowly decline, that we didn't have to make that choice, to wonder, is it time? Is it today? Tomorrow? The bad thing about it happening so quickly is that there was no time for special treats or long hugs or any of that stuff. Because what we're really doing, when we know in advance and can do special things, is grieving, but in a way that makes us feel good. We can grieve with love and affection, and afterwards we can remind ourselves of all the nice things we did, and maybe it hurts a little less. Now, with him gone, all the grieving is done in his absence, in emptiness. So the lesson here is to do those special things every day, because you don't know when the end will come. Don't let death leave you with regrets that you will have no opportunity to amend. 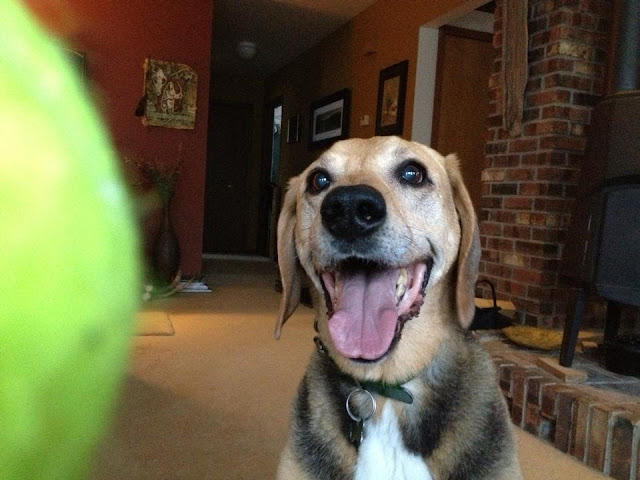 
I have been back from my AMAZING trip to Isle Royale National Park for nearly two weeks now, and I have not had any time to look through my photos or even think about writing about this trip. I am in the heart of art show season, and the growing/fixing season, and on top of that I am working on the edit of Lori's third Holly Wild book, Packing for the Porkies. I just don't see me writing about Isle Royale much before mid-July. To make matters worse, we leave August 2nd for a trip out west, to Theodore Roosevelt National Park. If I don't get it done by then I don't know when I will!

But I am itching to get it done, so I will do my best to at least start sorting through the nearly 1000 photos I took next week.  Have a fun Fourth of July!
Posted by Marie at 9:11 PM No comments: