Work work work, still trying to get everything done for the show this weekend. It's been tough because not only are we prepping for a show, but we are essentially restocking after last season. I've matted and bagged about 66 prints and haven't even started on Lori's yet. Have a few prints to frame, need to mat and frame my two new pieces (the heron and the squirrel and blue jay), and am on target to get the foxes done and framed in time for the show. Whew!

On top of that we got 7 inches of heavy wet snow today, so there's been timeouts for shoveling and roof raking. But you simply cannot argue with the beauty a winter storm bestows on us.

Thought I'd give you all an update from a slightly different perspective. The foxes are on my drawing table in my studio, and that's my view. It's a wonder I ever get anything done Some days it's a struggle, although when I'm in the zone a moose could walk by and I wouldn't notice--and we don't have moose here. I've looked up to see two white-tail bucks standing at the salt lick 20 feet from my window! 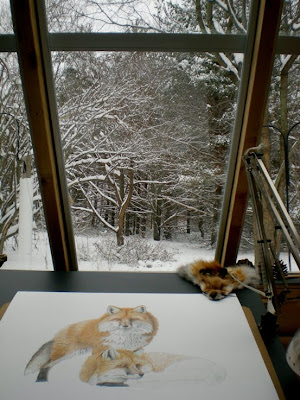 Thought I'd post a pic of me drawing, just in case some of you were wondering if I really do this stuff. Actually, there are some shows that want an image of you making your work and the one I had was four years old, so I thought it was time for a new one. Funny, I think I'm wearing the same shirt.... 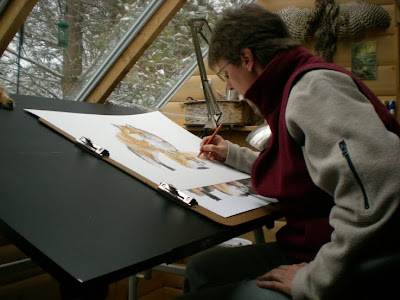 Had a special visitor today. A large male flicker that I've seen a few times over the season made an appearance. I was so glad I had a camera with me! He's a beauty, too, very dark topside with those stunning yellow tail feathers. 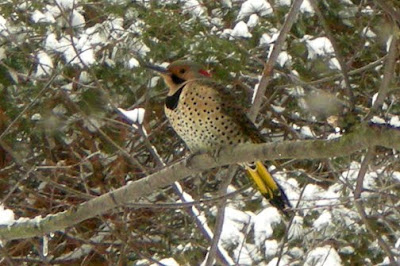 The foxes are coming along nicely, I think. The one standing is nearly finished, and I have "fleshed out" the one laying in front. I am pretty sure I'll have it finished in time for the show next weekend. 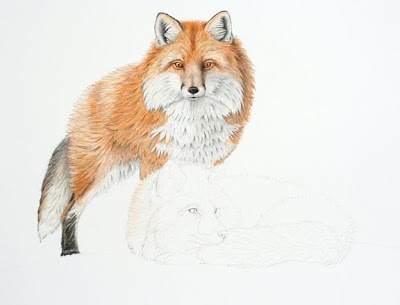 Here's a quickie of the new piece I'm working on, as yet untitled. These two beautiful red foxes live at the Howell Nature Center. Lori and I went about a month ago to get some photos of the animals there. I love this pose of the one fox standing above and behind the other, like a guardian. And what gorgeous winter coats they're wearing! I need to go back and get some pics of the coyote before spring. 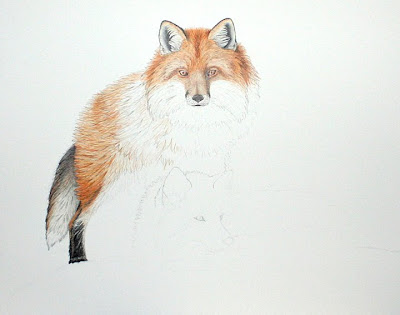 With so much activity around here--we're getting ready for a four day show the end of next week in Novi--I may not get back to my Florida trip until March, but I will try to squeeze in a post if I can. 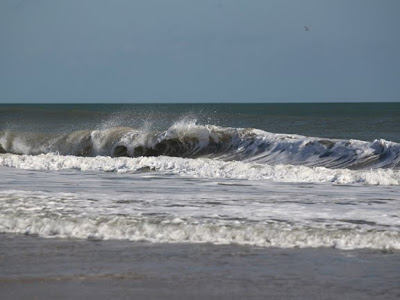 Ah, the beach. For those of you who have never wintered in the north, I cannot begin to tell you what a treat it is to be able to leave it, if only for a few days, and enter a world of sun. Our winters here are not bad, not bitterly cold and not usually very snowy, but the sun rarely shines. Even a beach on a sunny, 60 degree day with 20 mph winds from the northwest is better than the relentless low gray clouds that define a Michigan winter.

The weather during my trip was not typical Florida weather, even for early February. The normal high is around 68, but three of the five days I was there never left the 50's. I didn't care, the sun was shining, and the cool weather meant the beaches were deserted.

I did some research before leaving home and had decided to head down the east coast to the Archie Carr NWR. My grandma, who I was visiting, lives on the south end of Merritt Island, so the refuge was about an hour away. It stretches for 20 miles down the Atlantic coast, interspersed with private property. How wonderful it was to see dunes covered with vegetation, not condos.

As soon as I reached the beach I started taking pictures. I guess I am an ammature bird watcher. This birdwatching thing is a fairly recent development. Although I've been feeding birds since I was in high school, and studied my family's copy of A Golden Field Guide of Birds of North America (which I still have, loose pages and all), I never really had the inclination to spend vacations intentionally seeking birds. That seemed to change when I moved out of the city to a place where I see more than mourning doves and house sparrows. I've also become more interested in them as I've done more artwork of birds.

One thing I've found particularly useful is having a decent telephoto lens so I can take pictures and then identify them later. I am terrible at making ID's on the spot--I need to learn which features and markings to look for, then be willing to carry a bird book around with me. These little fellows, however, are well known on any beach--Sanderlings. 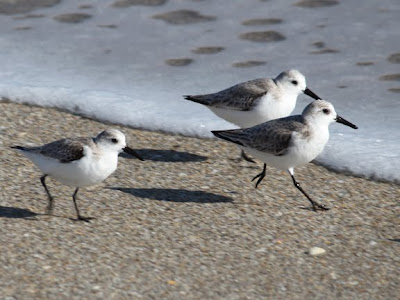 To watch them scurry back and forth across the sand with each advancing wave is the delight of many beach-goers. Their soft peepings can only be heard on a beach devoid of screaming children and blaring radios. They probe in the sand and on the surface for invertebrates that wash ashore. 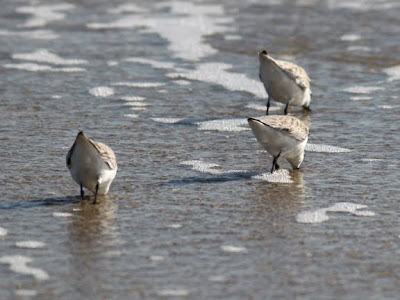 When they take to the air they show off their striking wing patterns, 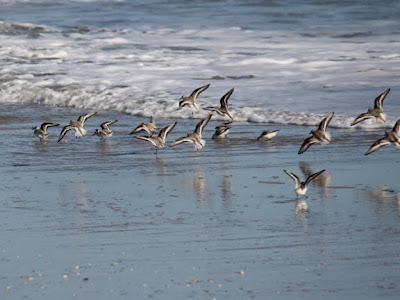 then get right back to feeding. 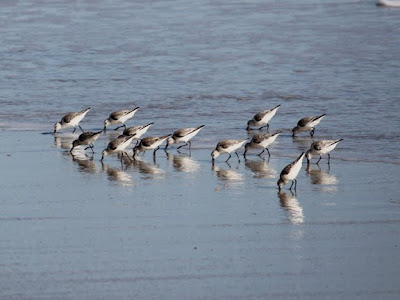 With the constant whoosh of rolling waves it's easy to be lulled by the sea. I was so enthralled by the birds that I nearly forgot to look down, a fun thing to do on the beach. 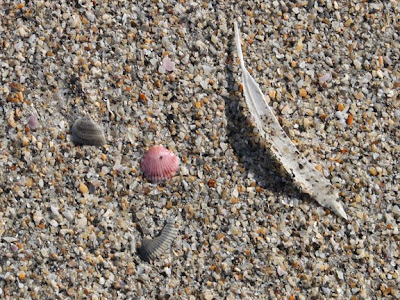 It's also easy to forget to watch up and down the shore. Birds don't move perpendicular to shore, but parallel to it. I'd be watching a flock of birds up the shore only to have terns or Brown Pelicans sneak up behind me.

I think pelicans are amazing. According to Cornell, the brown is the only pelican species that is found on the ocean and the only one to dive into the water to catch food. I love the way they sail above the water's surface, sometimes dragging wingtips, up and down with the crest of a wave. 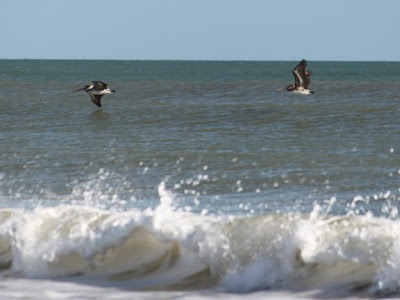 They are enormous birds and I was surprised to learn that the brown is the smallest of the world's pelicans. The typical wingspan for an adult is 90 inches, or 7.5 feet! They need big wings to hold up those heavy bodies. 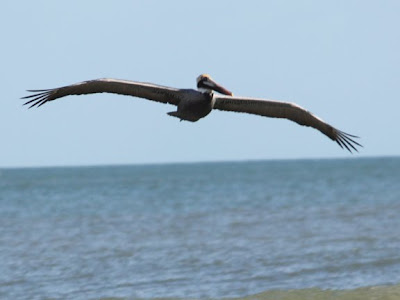 Every once in a while I manage to take a really nice shot. I didn't realize until I saw this image that their eyes are blue, nearly white. 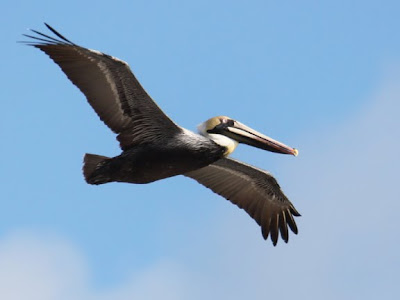 Coming back down to earth I spotted another shorebird. I didn't realize till I got home that this is another species. 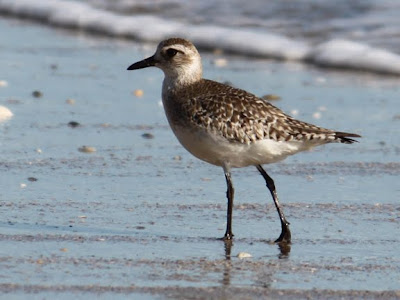 Once I had the image up on the screen I poured over the birds guides. I don't know how people identify birds in the field--or on the beach, if you will. I had about three different possibilities for this bird, then decided to see if I had any other photos of it. Ah, yes, I see now, a White-rumped Sandpiper. Without this shot I would have not id'd this bird correctly. 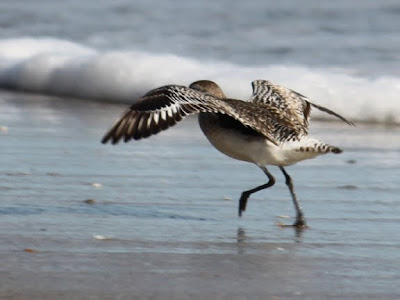 Now this bird I knew was not the same as the others, being much taller and larger, with a much longer bill. Still I had to pull up several images and study the books before I decided it was a Willet. 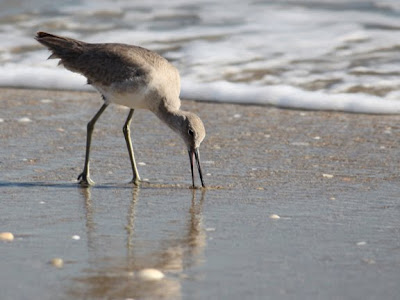 Dark but not black legs, white eyebrow and lores. 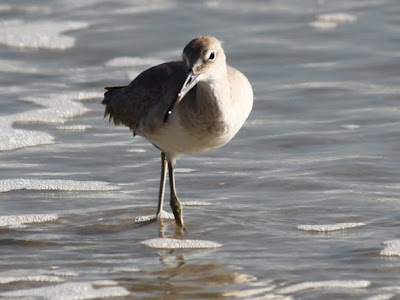 It was such a relief to be outside. I didn't care that it was only 55 degrees with a windchill. The sun was shining, I wasn't wearing mittens and there were birds to photograph. I couldn't think of much that could be better than that. 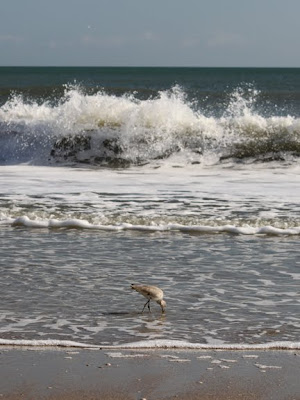 There would be plenty more bird surprises on this trip, but they'll have to wait till next time.
Posted by Marie at 8:38 AM 2 comments:

Well, it's been a busy week here at the compound. No excuse for not blogging, I know, but it's all I've got. My freelance photography job has started back up (I work for an online children's retail shop), I'm starting to gear up for a big show at the end of the month (Outdoorrama) plus working at my new job a manager for the Ann Arbor Artisan Market.

In addition to all that I have been getting ready to head down to Florida to visit my Grandma. The girls aren't going with me this time--last year we drove the RV down. What fun that was, our inagural journey in a 20 year old Gulfstream and we decide to go 2,800 miles round trip. No, this year I'm flying down alone, though I am taking my camera gear and plan on heading to the Merritt Island National Wildlife Refuge, so I will hopefully have some cool stuff when I get back next week. 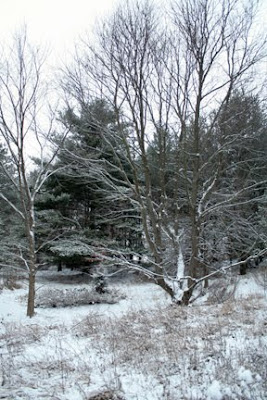 We got a nice fluffy snow yesterday, the stick-to-everything kind. Winter's been pretty average this year, although I think less snow than what we usually get. I'm not complaining--after our last two long, bitterly cold, record-snowfall winters, I'll take an easy one.

Flying to Florida this time of year is always a shock. Cold and dry when you leave here, you get off the plane in Florida and are hit by a wave of humidity you haven't felt since August. It can literally be hard to breathe. I've been going since I was a junior in high school, and while some years I dread it--feels more like obligation than vacation--I am actually looking forward to it this year. The last time I flew down by myself I did not take my camera gear and just hung out at my Grandma's place. But this time I am really looking forward to getting outside and doing some hiking in the refuge and along the Canaveral National Seashore.

So you won't hear from me for about a week or so. Take care, ya'll.
Posted by Marie at 7:41 AM No comments: