We are all political beings. While I have generally kept my blog a place to share my love of our land and environment, the swearing in of our 45th president has brought my politics to the fore. What is posted below is my post on Facebook from this morning, on the eve of what I see as a very dark time before us, ALL of us, regardless of your political leanings.

We left the Lamar valley around 11:30 Wednesday morning, having not seen any wolves, and drove all the way to the North Entrance and out to Gardiner to visit the Yellowstone Association headquarters. We were told the folks there would have up to date info on wolf sightings throughout the park. But when we asked, they didn't seem to know much at all, and had no knowledge of the bison that had been hit the previous evening. But the ladies were very nice, and we bought some books and a few souvenirs, then went next door to an ice cream shop for a treat.

Back in the park we stopped along the Gardiner River. The only places where we could let the dogs out of the van were within 100 feet of a road or other developed area. This spot along the river had a picnic area near the parking lot--this is actually just across the road from day use area at the Boiling River--so we took the boys out for a walk along the river.


It was a nice, sunny afternoon, so we took our time and enjoyed the scenery.

These two beagle that we adopted last year, Stanley and Cooper, more than likely spent most of their lives in a pen. They were both heartworm positive when we adopted them (the shelter did the treatment) and had a host of other parasites. Neither is neutered, and neither was housebroken, and both had clearly been abused. But they've come a long way in the year we've had them, and we love traveling with them, even if it limits what we can do and where we can go. They are good boys, quiet and pretty chill.

A bit farther down the road we came across this beautiful meadow full of blazing yellow willows. We stopped for some shots... 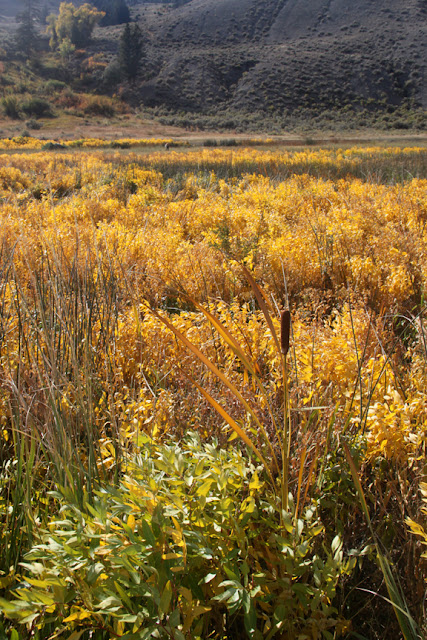 ...then noticed a big bull elk with his harem up ahead. What a remarkable animal. He was bugling away, calling the girls. I noticed the big crook in his muzzle--not sure if that's something that happens with age, or if he had been injured at some point. In any case, he was simply magnificent.

He eventually caught up with the girls... 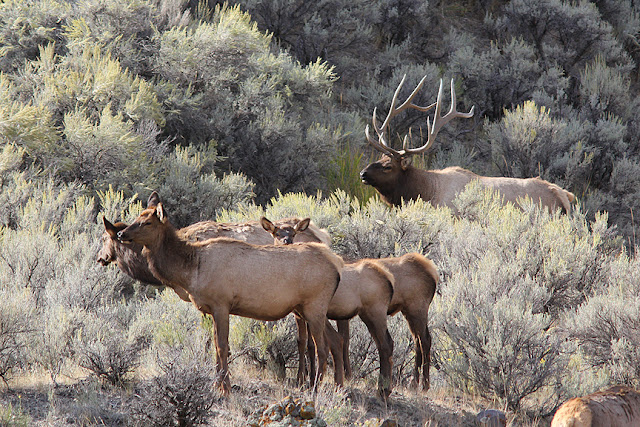 ...then continued to move uphill through the sagebrush. I swear he's posing.

We eventually made our way back to Lamar Valley, and found a spot to park and set up our scopes. There were lots of folks there, but not much activity. We were one pull-out west of where the bison carcass had been dragged to, and could not see it. We asked some folks near us about wolves but no one seemed to know.


I had my scope up and was scanning the valley when I noticed a few lumps about 150 yards out. As I looked closely, one of the lumps moved, and I realized I'd found all four wolves, lounging on our side of the Lamar River!


Oh boy were we excited! It wasn't too long before the black wolf on the left got up and stretched, and started making his way towards the carcass. He howled and called to the others, who seemed reluctant at first to join him. It seemed pretty clear that these were in fact the four pups from the Prospect Peak pack--pups this age (probably around six months old) have spiky hair on their backs, kind of like a warthog.

He eventually got the two gray and tan pups to join him. We were all hopeful that they would finally make their way to the carcass. 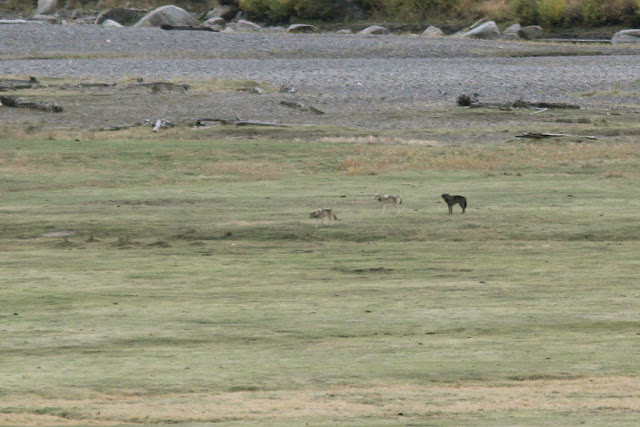 The trio howled and howled, and I tired some "digiscoping" with my iPhone


The black pup got within 50 yards or so of the carcass, then turned and trotted away to the west, ultimately passing in front of us before disappearing behind a ridge. It seemed like such a sudden move, and we wondered if  the rest of the pack was off that way somewhere. We hadn't heard any howling from that way but they were definitely moving with intent. 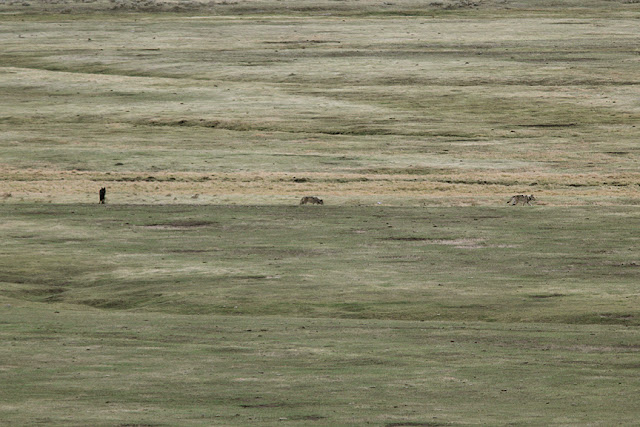 We watched until they slipped from view. 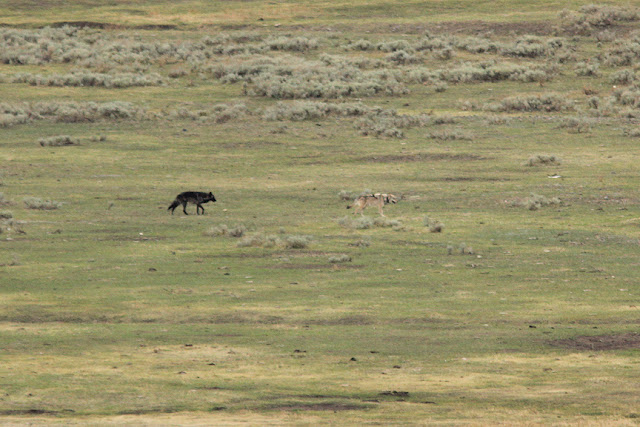 The ever-present coyotes watched them leave too.

We had to leave the following morning to get down to Madison campground, so there was no time to revisit the Lamar valley the next day, but we did hear that the wolves were on the carcass overnight, and were still there the next day. But nonetheless we were thrilled with the looks we had gotten, and it's another experience with wolves in the wild that I will never forget.

Next up: Norris and Madison areas.