Last Night at the Dassler Cabin

This meant, of course, that my work on the island was done and I'd have an extra day to explore. It also meant that Monday would be my last night at the Dassler cabin, so I wanted to take some time to sit and enjoy it. My journaling to this point had been mostly about what we'd been doing work-wise. I decided to sit and relax and take the place in for a while. Here's some of what I wrote:


So here it is, the last night at Dassler. Not sure how it happened so quickly. I am sitting on the bench that looks north across the end of Tobin Harbor. The sky is clear but hazier than it was earlier--perhaps a warm up is in the the works. The harbor is smooth and shimmering.

Tiny, newly hatched spiders are floating everywhere on silken threads. I look up and see a pair of loons swimming slowly towards me. they dawdle in the water below, preening, foot waggling, diving. They come together and swim apart, and occasionally hoot softly to each other. A White-throated sparrow sings "Oh sweet Canada" beyond the cabin, his sharp song blending with the sound of low swells breaking on the point. I don't know that there's ever been an evening as perfect as this.

--New cones on the spruce are soft and filled with sap.

--Candy Peterson said some artists have come here and seen the accommodations and left. As if this place were about running water and electric lights.

--A seagull is perched on the Eastern-most rock of Smith Island, a splash of white on the dark rock.

--The loons linger on.

--As the sun slips closer to the horizon my heart aches.

--If I am attacked by a wolf, please don't hurt the wolf. She is only doing what she needs to survive. We are not more important than them, despite our best efforts to convince ourselves otherwise.

--The gull has flown away.

--I look behind me and there is the half-full moon over the cabin.

--The sun slips lower still and the chill air begins to climb the rocks.

--A breeze picks up and ruffles the surface of Superior.

--My fingernails are dirty--when was the last time I washed my hands? 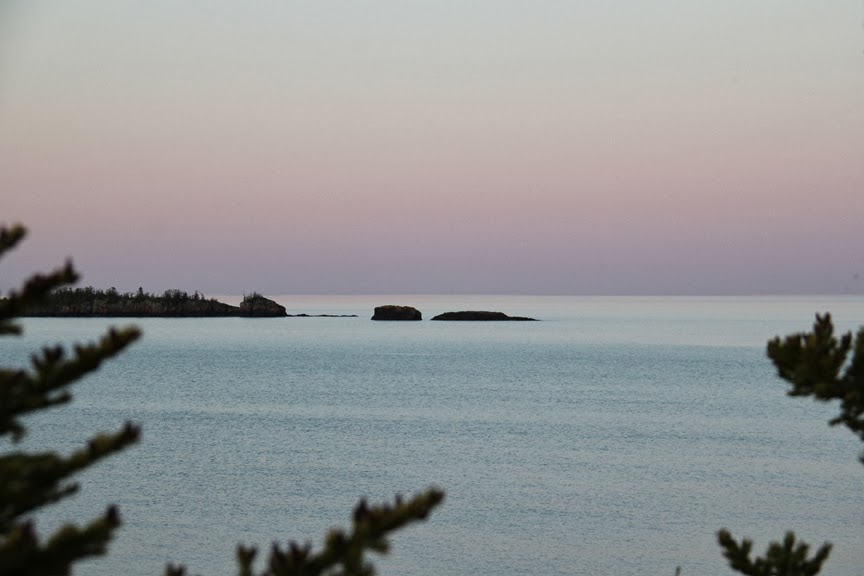 --The sun dips finally, fully, behind the trees and the loon--oh the loon!--begins her Northwoods song, as her partner swims past, oh so close. Thank you. A thousand times, thank you. 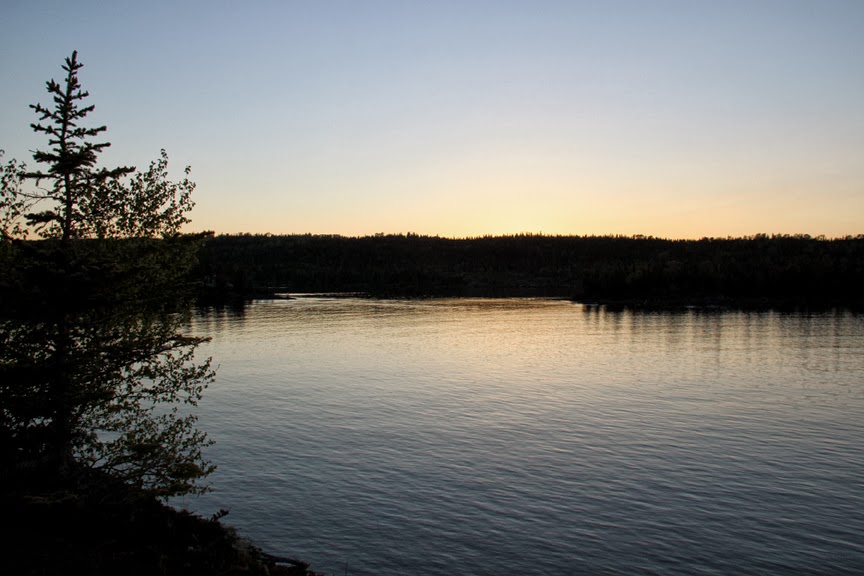 Next: Solo hike to Mt. Franklin and our departure.
Posted by Marie at 9:42 AM No comments:

After a few days of stormy weather Monday dawned clear and bright. We headed back to the Kemmer cottage to finish what we could of the boat house. It was not an easy job as the building sat on a rocky slope, and maneuvering the ladders and getting them level enough to work from was quite a chore. We ended up running out of paint before we finished.

After lunch, four of us newbies took an hour boat ride down to the Edison Fisheries and to the Peterson's place, home of the decade's long wolf study. The Petersons have been studying the connection between the moose and wolves on the island, as controlled a study as is possible thanks to the confined nature of the island. I will not go into a lot of detail about their work, but you can visit their website/blog to learn all about it: www.isleroyalewolf.org  They are currently on the island doing their winter study, which is about the only time they can determine how many wolves are on the island, which last I heard was up to ten or eleven.

It was a gorgeous, calm afternoon and we had a pleasant ride. We had to dock at the fishery as there was no room to dock at the Peterson's. We spent a little time exploring the buildings.

There were some curiosities along the way, including this:

The Peterson's place was not really "their" place. Like all of the structures on the island it belonged to the Parks, and was known officially as the Bangsund Cabin after the family who last lived there. I love the cherry red paint and colorful window boxes.


One of the things the Petersons have done is to collect moose bones. They send several teams out every spring to bushwhack the backcountry and bring back any bones they find. The result is an impressive collection, which can be studied to determine age, health and cause of death of these huge animals. 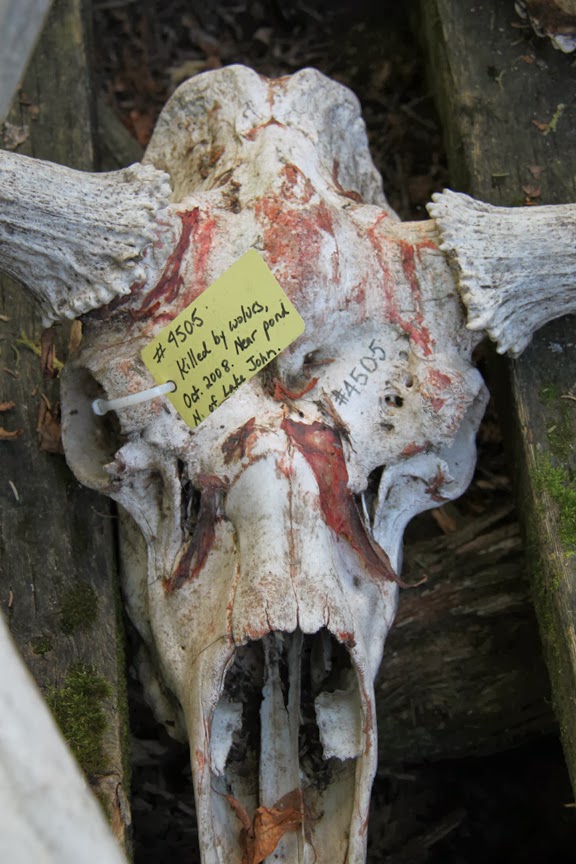 We had the privilege of speaking to Candy Peterson for a while--Rolf was busy working on the roof of one of the buildings. She was gracious and a wealth of information. Of course, we had brought them cookies....

We left after about an hour as we needed to get back in time for dinner. It was a remarkable experience, one I didn't think I would enjoy but ended up finding quite fascinating. During one of our rainy days I had read over the copy of the 2013 Winter Study that someone had purchased and left in the cabin, and that helped pique my interest.  Oddly enough, I would run into Rolf two more times on this trip, once on the trail with Candy and another fellow, and once on the Ranger III returning to Houghton.

Next: my last night at Dassler and a hike up to Mt. Franklin

After our day off and my very enjoyable hike to Rock Harbor with my new BFF Mary, I slept like a baby. John had caught wind of my chilly nights and gave me a wool blanket--what a difference! I woke at 6 am, and lay in my bag for a while enjoying being warm. I waited too long, though, and it started to rain. Not hard, but in a tent any rain sounds like a downpour. I crawled out of my bag, got dressed and donned my rain gear, and headed to the cabin for breakfast.

The rain never amounted to much, so I spent Saturday working with Mike, Jim and Bob at the Kemmer cottage, painting the boat house.

We got a full day of work in, although by the end of the day a light rain was falling along with the temperature, and I could see my breath. After dinner we had a brief, heavy rain, and we started a fire in the fireplace to knock the chill back. Out of nowhere the wind started to howl. The sun had come out and we were taken aback by the sudden gusts. I grabbed my camera and ran outside. The wind was blowing up Tobin Harbor from the southwest, and menacing clouds plowed across the sky to the north and east. 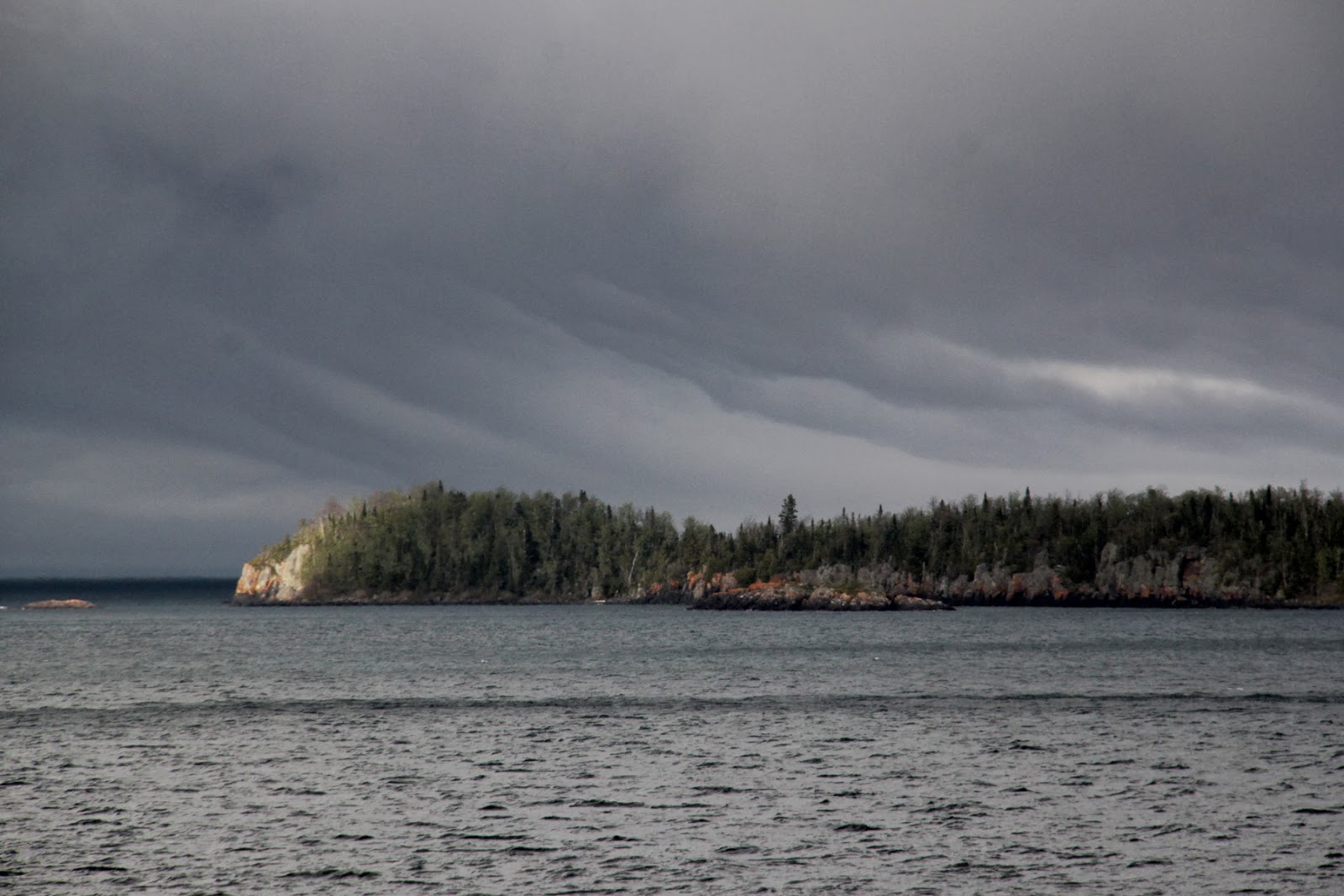 It was still clear to our west, so the sun lit the small islands, producing a beautiful juxtaposition with the grey sky and steely water. 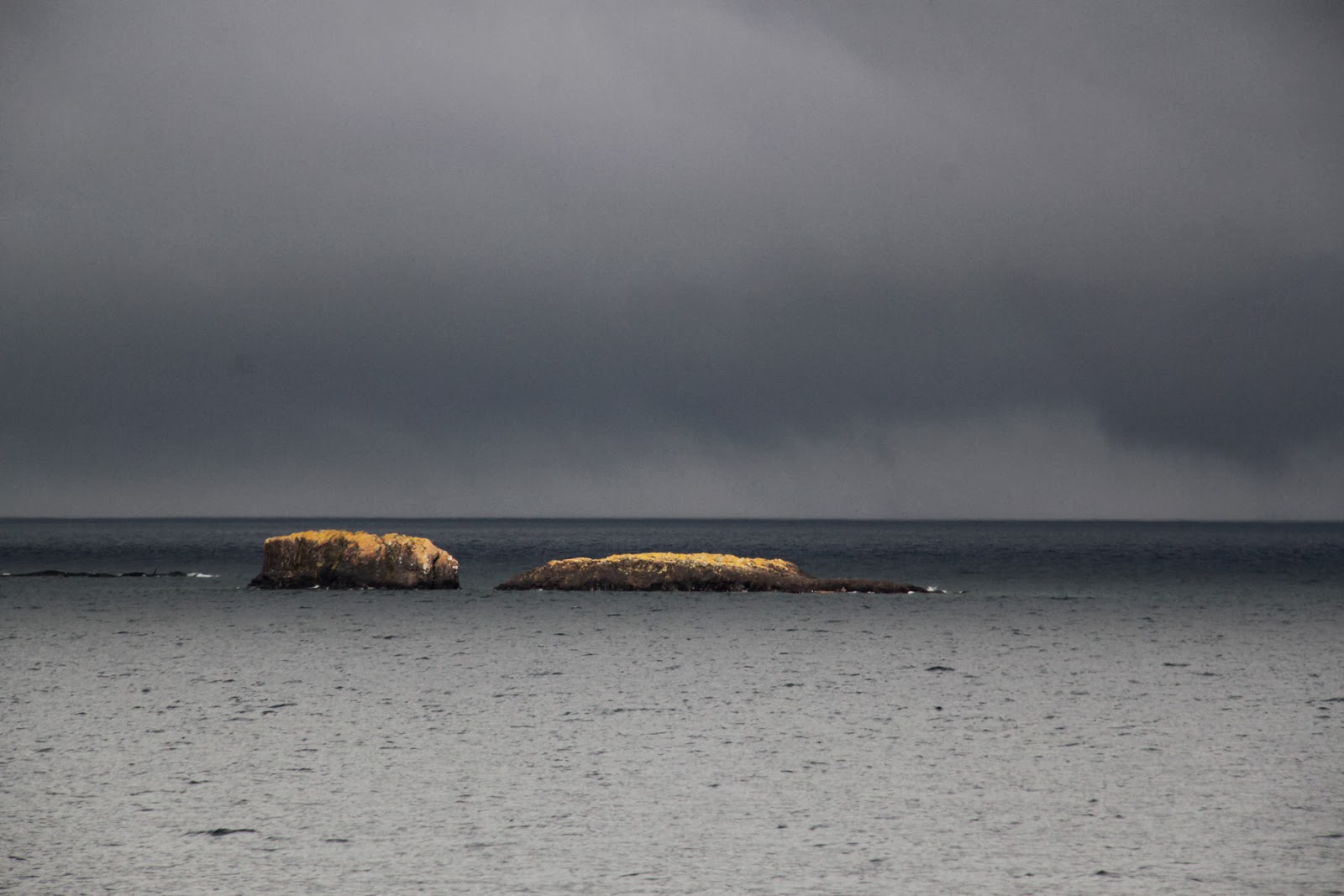 As quickly as it had come up, the wind died back down. I sat and watched the weather for some time before fog started to roll in from the west, dimming the sun. Big swells were pushing in from the northeast, indicating weather and wind far out over Superior. It was eerie, since the surface of the water had calmed, but the swells were crashing against the rocks below me.

Just like that, visibility dropped to less than a half mile. I was struck by how quickly the weather changed, so dynamic near such a large body of cold water.

Finally, around 4:30 Sunday morning, the storms caught us. Lightening flashed and thunder boomed, and I lay there trying to remember if there were any trees nearby large enough to reach my tent. By the time I got up at 6:30 the storms had passed and the sky was clearing.

We headed back to the Kemmer cottage Sunday morning. John was talking about sending us newbies over to visit with Rolf and Candy Peterson, who have been studying the wolves and moose on the island for nearly 50 years, after lunch. But I didn't have a warm and fuzzy feeling about the weather--it felt unsettled to me--and the morning forecast confirmed a chance of thunderstorms in the afternoon. I told John to count me out.

We worked on the boat house until lunch, then returned to Dassler. The sky began to darken, clouds chasing us across the harbor, and it started raining around 1:30 pm. It didn't let up until nearly 4:30, so no more work got done that day, and no one went to see the Petersons. We decided we would try for Monday afternoon.

After the rain passed I went down to the cove to fetch water to filter. A pair of Spotted sandpipers were making their way around the steaming rocks, which were now warming in the sun.

It was not long, though, before the fog pushed in again, thicker than the day before. I stayed in the cabin for a while, writing in my journal and sketching the layout of the cabin as well as a map showing the immediate area with the names of the small islands. (My plan, though I may not get to it, is to set up a page with my journal entries and I'll include those sketches there.)

Next: Finishing the Kemmer boat house, and a trip to visit the Peterson's
Posted by Marie at 11:05 AM No comments: