Blog writing always grinds to a halt for me over the summer, as I am running around with my hair on fire doing shows and trying to keep up with things on the home front. This year has been worse than past years, as I've done a number of out of state shows, back to back (to back), got wrapped up early in the year with some drama with my grandmother in Florida, and now, with the disappearance of our beloved beagle, Mr. Pickles. 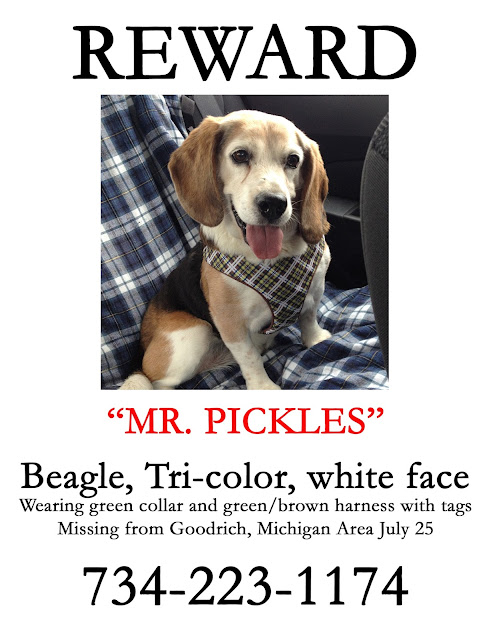 The last weekend in July saw all three of us were out of town--Lori had a show up in Marquette, Lisa and I were headed to Ely, Minnesota. We made arrangements for Mr. P. to stay at my aunt's, as he has done many times in the past. He's a shy and somewhat fearful pup but he loves Terry, and she has the right personality to deal with his quirky-ness. But this time she was to be out of town over night one of the nights, and my uncle who lives nearby was to stay the night and watch Mr. P. and her dog Spirit.


Mid-afternoon Saturday, July 25 I got a call from Terry to say that Mr. P. had escaped from the house when Mike went to take the dogs out. Oh my heart just sank. I knew there was no way that crazy dog was going to come to Mike. And he didn't. Terry and her husband Joe drove all the way back from Chicago that night, getting in around midnight, to be there in the morning to help look for Mr. P. The problem is they had no way of knowing that by Sunday morning he was already five miles away.


We were sick with worry, and left Ely Sunday as soon as we'd packed up the show--which we did in record time. We drove all night, stopping for just a few hours to try to get some sleep, which did not come easy despite our exhaustion. We arrived in Grand Blanc around noon Monday and joined the search. We determined that he had last been seen behind a church on Green Road near M-15 sometime Sunday afternoon, July 26, and that still stands as the last time anyone has seen him.


Mr. Pickles clearly hasn't had it easy in life. He's afraid of most things, including loud noises, children, strangers, things thrown at him, strangers....  It is very hard to catch a dog who is afraid of everything. When we got him from the rescue he was filthy, had a yeast infection in his ears, rotting teeth, and has cataracts. He spent three days running around our house, terrified, until he finally decided I was his person, and he has been my constant companion ever since. The thing is, though, that he panics any time he can't find me. If he's asleep and I leave the room, and he wakes up, he will run around the house, frantic, trying to find me. He gets so frantic that he will run right by me, and I have to holler at him before he sees me.


We have done everything we can think of to get him back. Visited shelters. Gone door to door. Put up signs and posters and handed out fliers. Police, post office, delivery people. Started a Facebook page, www.facebook.com/findmrpickles, which already has over 500 likes and has reached a staggering 35,000 people. Put together a group of 12 people who drove the area August 1st, talking to folks and passing out info. We've driven backroads and scoured barns and farms and he is just nowhere. We are really afraid that something happened to him Sunday evening or night, that he died of heat stroke or had a heart attack or got hit by a car and crawled off into a cornfield to die.

But maybe he collapsed for a while behind the church, then left in the dark of night, still searching for me and our home, which of course is nowhere near where he got lost. At this point we have no idea where he is, and the haystack has gotten so big that we have had to give up actively searching for him, and instead hope and prey that he gives up and let's someone find him. We so desperately want him home.


So we continue to search, to check shelters and take calls and hope and pray, and send good thoughts out to the doggie gods that he is safe and will come back home some day.