As I mentioned in my last post, we took some time in April to head south and escape the cold snap we were having in southeast Michigan. After five days in Kentucky we had planned on heading home, but the forecast called for more snow. We could stay at the Land Between the Lakes only if we changed sites, as the one we were in was reserved for the weekend. But the only available sites were not that great, and since the forecast in Kentucky called for lows in the mid-30's, and both Karin and I had brought work along, we decided we could stay another week and look for a place farther south, where spring was firmly in control.

I opened up Google Maps and looked for green blobs south of us. What I found, in northern Alabama, was the Bankhead National Forest. Was there camping? Check. Where there trails? Check.
My friend Karin read about Bankhead as we drove, and I was pleased to hear there's a wilderness area within the forest, the Sipsey Wilderness Area. In addition, the campgrounds were on a reservoir, and there were over 1,000 waterfalls within the forest.

Thanks to traffic we got in a bit late, but got a site on the water and set up the camper before it got dark. The Corinth Campground is RV friendly with full hook-ups, which is great when you have a tiny camper with tiny waste-holding tanks. There is also a tent area between the two loops of the campground.

The next day we hung out at the campground, relaxing and enjoying the sunshine. I went for a walk along the trail that linked the two campgrounds and was surprised at how pretty it was. Buckeyes were in bloom, and small streams dribbled over rock ledges. The cove directly behind our campsite was gorgeous, with steep rock walls down to the water. Lewis Smith Lake is actually a reservoir made by a dam on the Sipsey River. I have learned that there are very few natural lakes south of glaciated areas, like in Michigan and Minnesota. Lakes in the south are almost all reservoirs made from dammed up rivers.

Saturday was another day chilling at the campground, so by Sunday we were ready for a little exploring. The ranger told us about Kinlock Falls, on the edge of the Sipsey Wilderness and very near the road, so we started with that. It was a warm day but noticably cooler by Hubbard Creek. There was a rope swing that I could see would be very popular in a couple months.

Thanks to its mix of hemlock and beech, I could almost believe I was in northern Michigan.

After lunch we checked out the Natural Bridge Picnic Area, where an easy paved trail lead to the bridge and some really interesting rock formations. The whole Bankhead area is part of the Cumberland Plateau, a geological feature stretching from New York to Alabama. The region west of the Appalachian Mountains was, hundred of millions of years ago, a flat outwash plain formed by runoff from the mountains, and often covered with water. Much like the Ozarks to the west, this area was lifted by tectonic activity, then carved into the rugged landscape it is today by rain forming creeks and rivers. It is typically covered in thin soils, and due to that and its ruggedness was not heavily populated, by Indians or Europeans, until recently.


There were some fascinating geological formations down in the ravine leading under the bridge, but I have not been able to figure out how they were made. As far as I can find there's no volcanic activity so perhaps this is just from lifting and twisting.

The underside of this overhang has been shaped by water filtering through the porous sandstone, carving out holes and  stretching stalactite-like fingers towards the ground.

Monday rained much of the day, so we set our sights on Tuesday to head into the wilderness area and hike the Thompson Creek trail. Even though it was only about 13 miles from the campground, it took us nearly an hour to reach the trailhead. We'd packed lunch and planned on hiking about 2.5 miles in to a waterfall, but within about a half mile we reached a crossing.

The stream was not particularly deep or wide, but with the inch of rain we'd gotten the day before, it was deeper than it should have been and running swiftly. Downstream in this pic are rocks to hop across, but they were down a cut bank, and the stream bed around them was deep and uneven with jumbled rocks. It would not have posed a problem except we had my two old beagles with us, one of whom is mostly blind, and they would not be able to walk across there without risking breaking a leg. We walked farther upstream but didn't find any other place where I felt comfortable walking across--they all involved taking my boots off and walking barefoot over the stones, something I didn't want to do. I got frustrated and we turned around and headed back to the van.

Back at the van we had a snack and discussed our options, and fed the dogs, as it was now around noon. While we debated, a younger couple pulled up, about to head out on the same trail. I decided to suck it up and just do it, so we hiked back out to the crossing. As I stood there still contemplating, the couple hiked up, climbed down the bank, hopped over the rocks and headed up the trail on the other side. I felt like such a wimp--the woman was only in shorts, t-shirt and running shoes, while here I was in all my gear afraid to cross the stream.

So I grabbed a dog, tottered across, set him down then went back for the other. It was NO BIG DEAL, and I felt really silly for making such a fuss about it.


The trail was pretty easy, though hiking with a blind dog means watching for any hazard he may run into or fall off of. I did still manage to enjoy the scenery, like these beautiful red trillium, which we don't have here in our woods.

The entire area is laced with small streams and rivulets, and we decided this was a lovely spot for lunch. The creek divided and split around several small islands here, and we could see that in heavy rain our lunch spot could be inundated by water. But today it was serene, and we lingered here before heading back to the van. 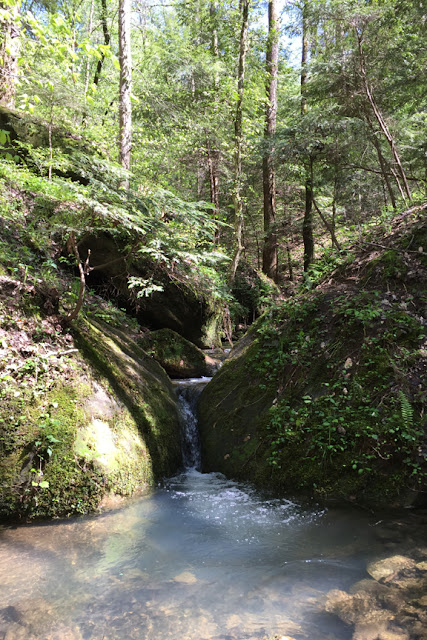 Wednesday we decided to hike along the Sipsey Fork from the Sipsey River Picnic Area. This is a popular hike, and there was a school bus in the parking lot, which I was a bit dismayed about.

Down from the main parking lot, on the road to the day use area, there's a narrow bridge. We walked down there first to check out the river, and noticed all this debris on the downstream side. We later spoke with a park employee who said the area had seen severe flooding around Christmas last year, and that the water had over-topped the bridge. I was astonished--this bridge is at least 25 feet above the river. That's a lot of water. All along the trail we saw debris stuck in the trees well above our heads, and marveled at the amount of water it would take to lift the river so far out of its banks.


This was a bit more rugged than the Thompson Creek trail, but the more arduous hike was worth it--the trail hugs the river on one side, and is crowned by moss-covered rock walls on the other. I lost count of how many waterfalls there were. Getting the dogs around some of them was a challenge, although that was mostly due to Stanley's blindness. And everywhere there were trees growing on rocks. 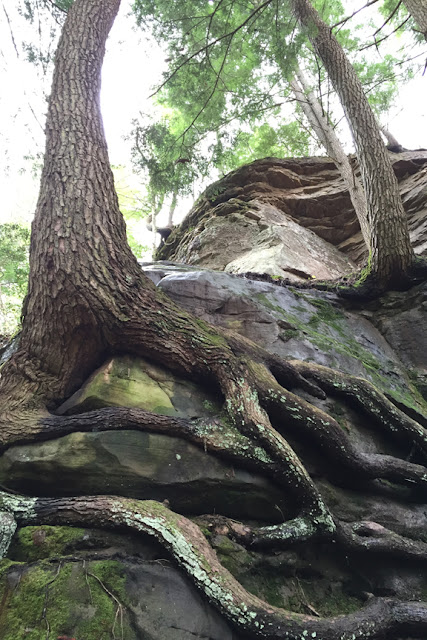 We did run into the school group, and then we got hung up by another creek crossing. This one was much trickier, with steeper banks, and no good way to get the boys up and down, so we turned back after a couple miles. But the hike was well worth it, even if we didn't go as far as we'd hoped. 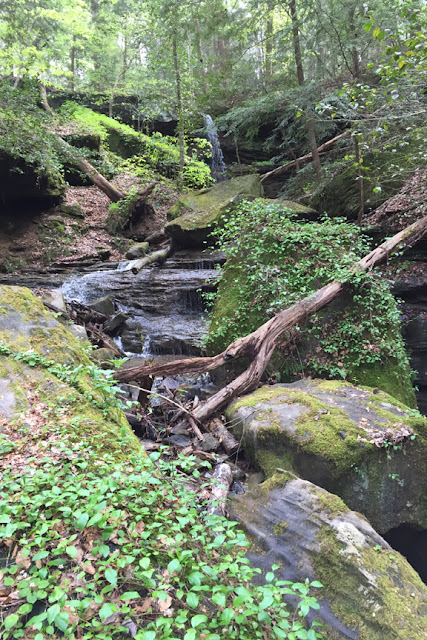 The next day once again called for rain, so we opted to do a little birding. There were several species in the park that I was targeting, and I was thrilled to find one of them--a Prairie Warbler. Parts of the forest are still logged, and these regenerating areas create habitat for all sorts of different species. I think we counted twelve of these guys singing along a half mile stretch of dirt road.


We stayed in the park for a week, and I loved every minute. I had no idea such a place existed in Alabama, and I'm sure I'll be back some day. Everyone we met was very nice, there are a few small towns sprinkled through the area so there's grocery stores, banks, and a few restaurants as well as laundromats and the like. Next time perhaps we will backcountry camp along one of the beautiful creeks or rivers.
Posted by Marie at 9:01 PM No comments: