We are finally at the end of the Alaska trip!

While this was ultimately a birding trip--and we saw well over 100 species of birds, many of which were new to me--the parts that stick with me have more to do with the amazing scenery and other animals that we saw. From the boulder-strewn tundra of the Seward Peninsula to the glaciers of Resurrection Bay to the mountains of the interior, I was blown away every day by the beauty of this amazing state. We were lucky to see musk ox on the tundra, the only place on this trip where we could have seen them, and certainly something I could never see at home. Caribou too, and Dall sheep. Then of course all the marine mammals, like sea otters, Orcas, harbor seals, and Stellar's sea lions. Those beautiful, calm, clear days on the waters around Homer and Seward. Getting to join the 30% after being lucky enough to see a cloudless Mt. Denali (whose name has been changed from Mt. McKinley since I started this blog series). Spending ten days with eight of the nicest people you could hope to be stuck in a passenger van with.

But on that last day, with our trip though Denali National Park winding down, we were treated to the ultimate sight.

As we trundled along the dirt road in the tour bus, we spotted a grizzly fairly near the road, digging in the soil for insects and roots. She glanced up as we approached.

There, scratching in the dirt as they imitated mom, were two first-year cubs.

To say we were delighted would be an understatement. 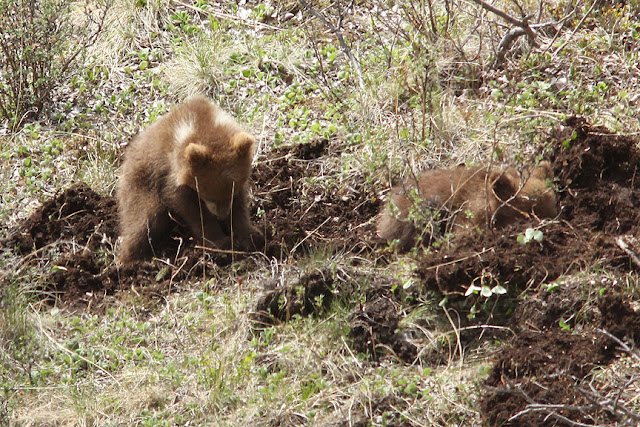 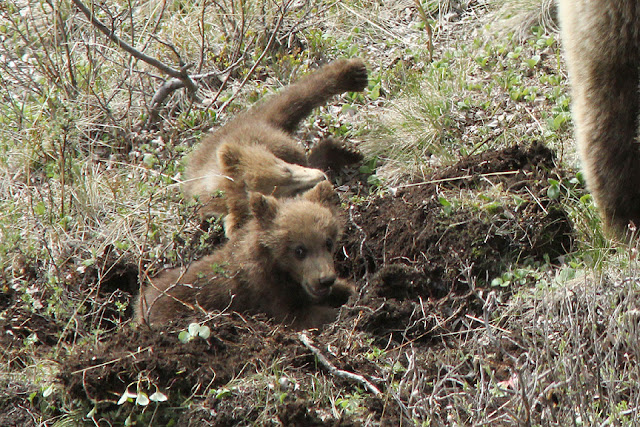 He eventually got up and found a stick to chew on... 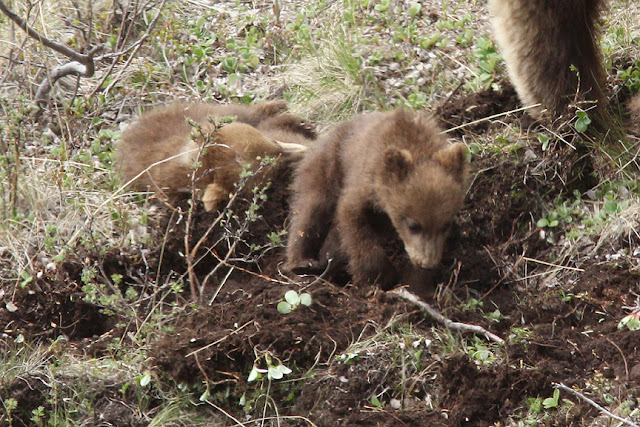 ...while his sibling looked on. 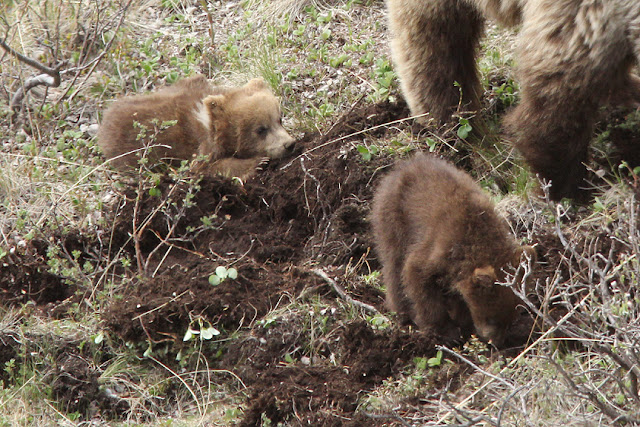 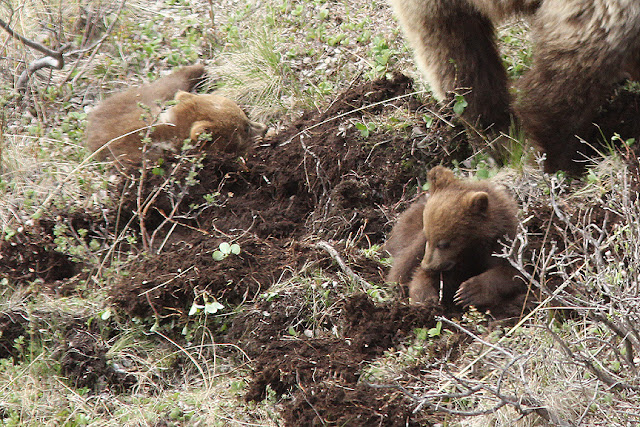 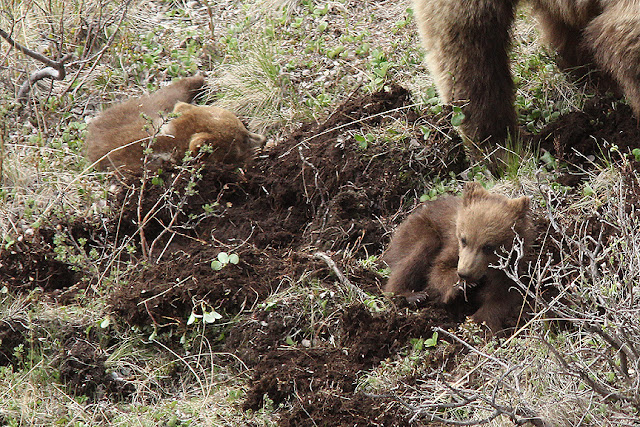 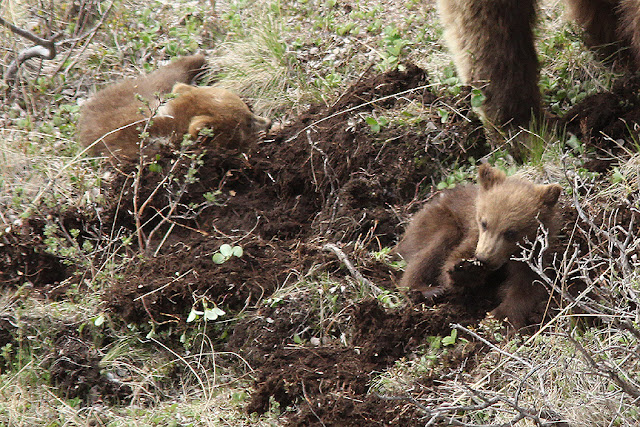 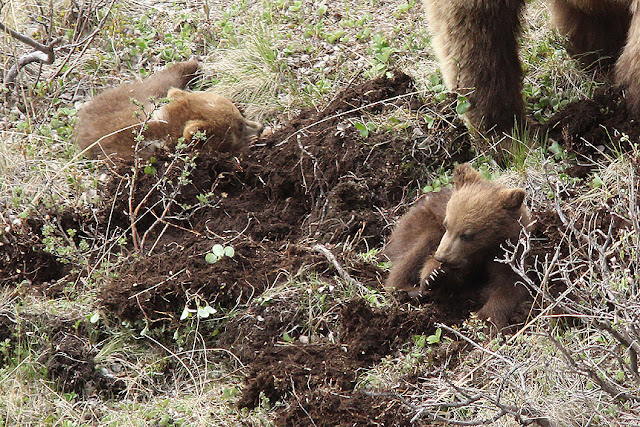 I could have sat there all day, watching this family. To be so close, to have such an amazing view of them as they went about their day to day lives, roaming free, not in a zoo, not behind a fence--it was magical.

We were only able to spend a few minutes with them as another bus rolled up and waited their turn to take a look. While it was such a short time, it's an experience I'll never forget.

I cannot wait to go back. 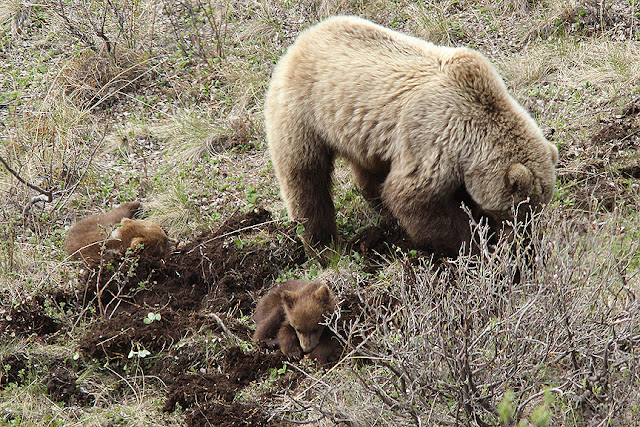 While all the up close looks of caribou, moose and Dall sheep were really nice, what we all wanted to see were bears and wolves. Wolves, it turns out, are in short supply in the Denali area these days as hunting and trapping in recent years has greatly reduced their numbers, and we did not see any. But on the return trip from the Eielson Visitor Center, we hit the jackpot with bears. First we spotted a lone grizzly a couple hundred feet from the road. We stopped to watch for a few minutes, then moved on the let another busload have a look.

Farther along the road someone spotted a large sow sitting on the side of a hill, watching our approach. We stopped to have a look. She did not seem too thrilled with our gawking. (Once again I had to shoot through the windows of the bus so the image quality is compromised.)

She looked around and sniffed the air. 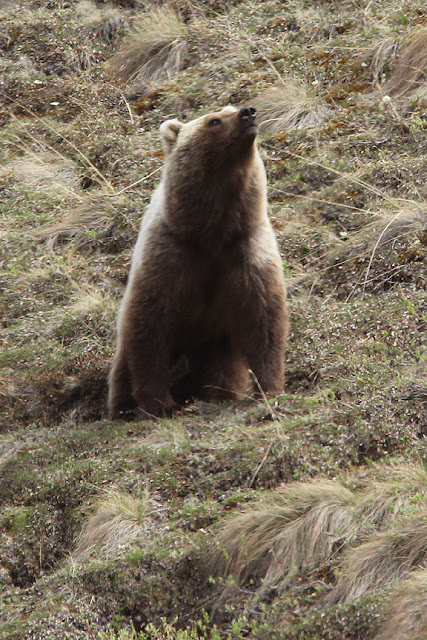 Soon we saw why--two second-year cubs came trundling up the hill towards her! She got up and walked off to our right, and the cubs followed.

The wind had really kicked up and it blew through their thick coats. 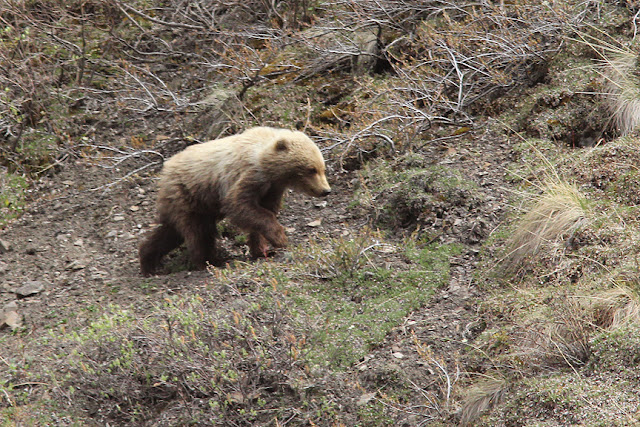 Mom paused at this creek while the kids caught up. 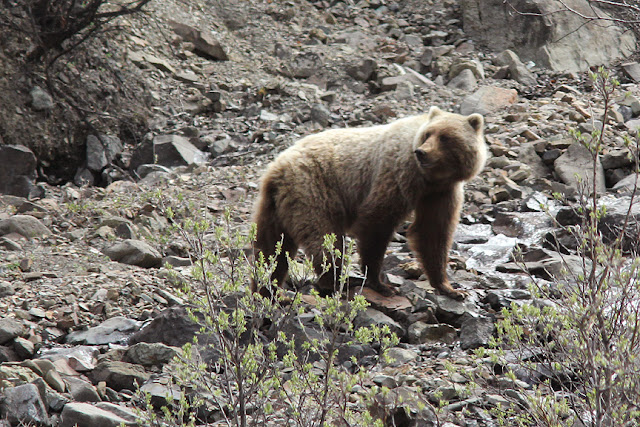 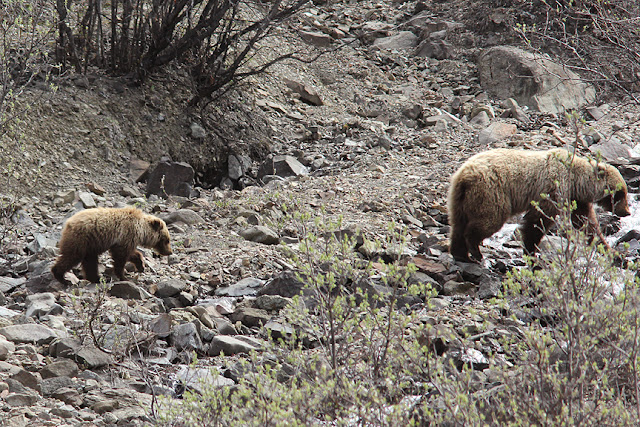 The soft afternoon light was gorgeous on the bears and the hillside. 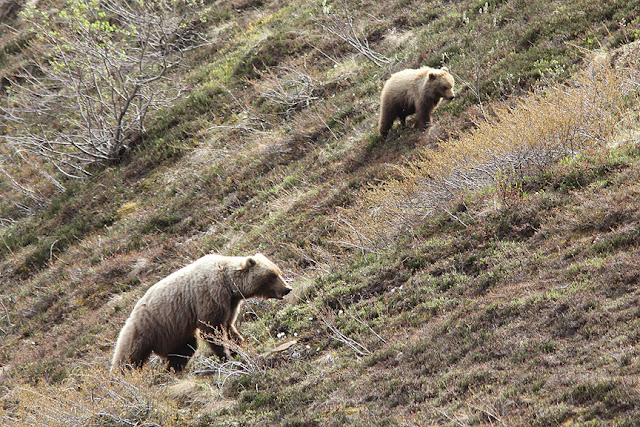 The family continued to move to our right, until they were within 75-100 feet of the bus. 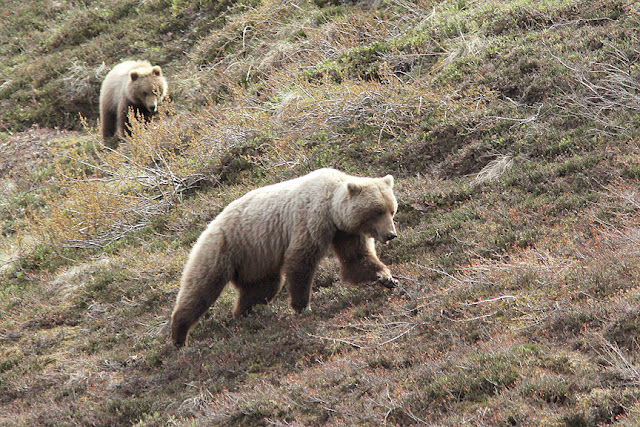 The littler of the two huffed it up the hill. 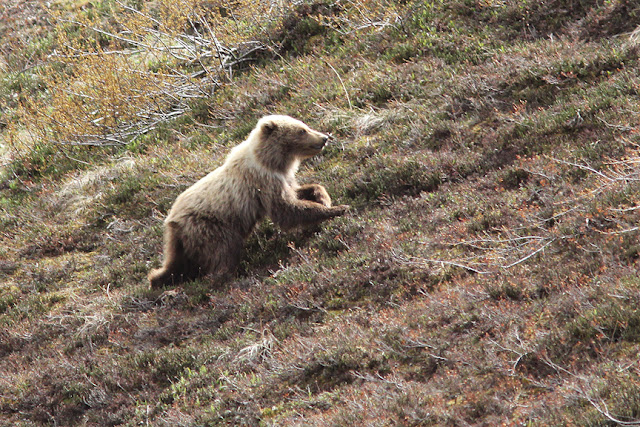 This is one of only a couple shots where I was able to get both cubs in the frame. 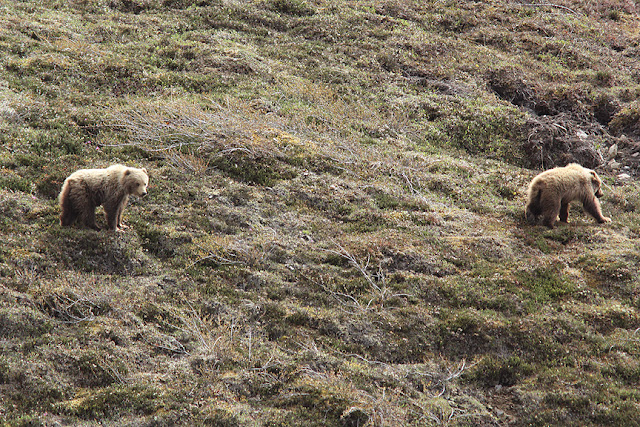 Even in June there were still patches of rotted snow in the hollows. As the bears pushed past us we moved along too. It was one of the most special moments of the trip for me. Watching these animals in their natural habitat was amazing. But before we came across this trio, we'd had another close encounter with a grizzly family, which will wrap up the Alaska blog series--but that's for next time! 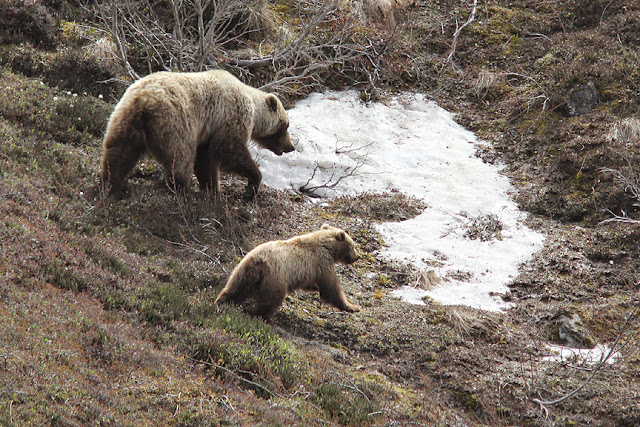 I am determined to get this Alaska series done before 2016. I cannot handle the thought of being two years behind on this, tho admittedly there are other things I want to write about that are older than this trip. In any event, I have three more posts for Alaska, all of them in Denali National Park.

Considering we were only in Denali for about 12 hours, we saw a remarkable number of animals. And considering that the park and preserve total 6 MILLION acres, I was surprised by how many animals were near enough to the road to be easily visible.

We already visited the Dall sheep, which were literally so close to the bus I had to change lenses. We didn't see much more until we reached the Eielson Visitor Center, when I spotted a fairly tame Arctic ground squirrel munching on some tender leaves. Cute little things, they are one of only three mammals in Denali that hibernate over the winter. Smart!

After our stop at the Eislson Visitor Center we started the drive back. The return trip proved much more fruitful for sightings. Odd, I thought, as it was now mid-day, but there you have it. This cow moose came up from a stream on our right. I can't recall now if she crossed the road in front of us or not, but at the very least she came within 30 feet of the bus.


There were lots of caribou along the route, with some once again quite close to the road. This cow watched the bus with interest.

A small herd moved down the hillside from our left. This bull paused for a few nice shots. 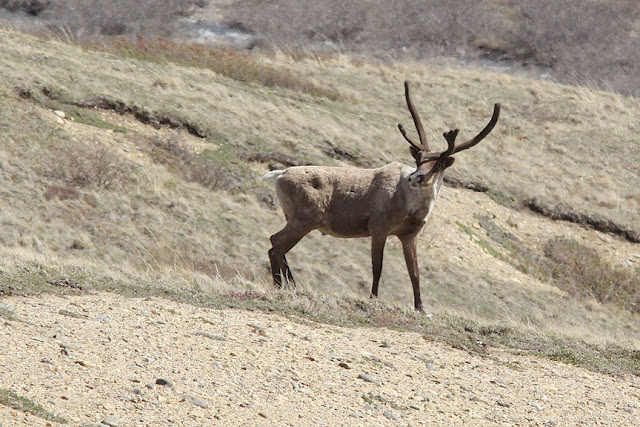 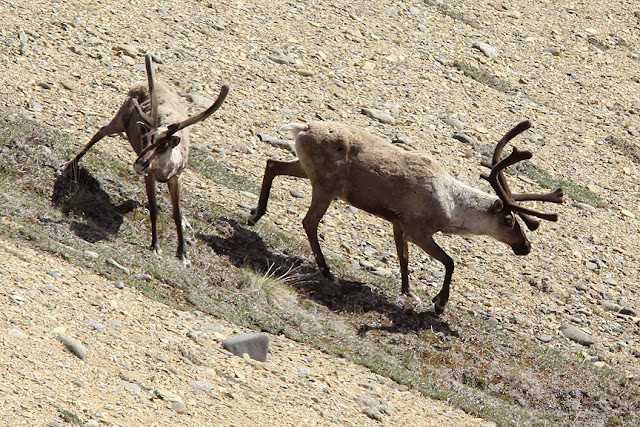 A bit farther along we found this handsome fellow, by far the largest bull we saw on our trip.

According to Wikipedia, caribou bulls have the largest antler-to-body ratio of any animal in the deer family, and the second largest antlers after moose. 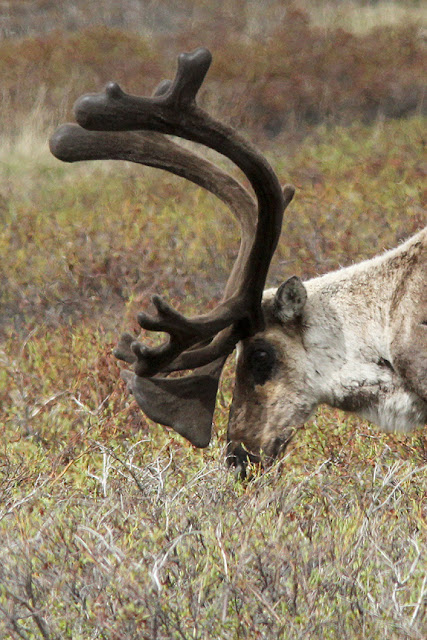 Someone spotted a red fox trotting along the road, and I managed a few shots through the window before he slipped off the road.

But one of the biggest treats of the tour was near the end of the ride, when we encountered this bull moose grazing to our left. He's either young, or his antlers have a long way to go. Either way, he was spectacular and, other than some VERY long-distance looks at two bulls in Yellowstone eight years ago, this is the only bull moose I've ever seen.

Such an impressive animal! 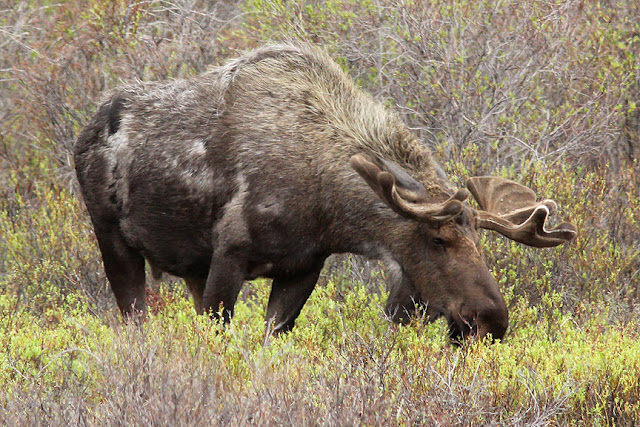