Quest for the Great Gray Owl

After our visit with the Ruffed Grouse, we continued on to Canyon Village, where the folks at the Madison campground had said there were Great Grays seen earlier in the year. We stopped for gas and I could not resist some close-ups of a stately Common Raven hanging out by the pumps.

We talked to some employees at the visitor center, but didn't get any clarification about the owl. One ranger directed us to a nearby horse stable, saying he'd heard they'd been seen in the pasture. So we did some driving around, but instead of owls we came across a bear jam. A large grizzly was digging up turf in a field about 100 yards from the road. He was a bit too far for my lens, but I couldn't resist some shots.

Starting to feel a little frustrated about our owl search, we went back to Canyon Village and asked someone else about the Great Gray. This time we hit pay dirt--her friend had seen the owls around the Bay Bridge Marina only a few days before. We wasted no time in heading down.

As we neared the area, Lisa and Lori scoured the sides of the road as I drove. We weren't sure about the exact location, but when we approached the marina, Lisa spotted a group of people with cameras and scopes pointed up into the trees lining the road. I turned around as soon as I could, and on the way back Lisa saw the owl.

I had to contain myself and not burn rubber into the parking lot. My first view of the magnificent Great Gray Owl was of her perched on a dead-fall, looking mildly irritated, as they usually do.


She was hunting in the area along the channel that leads from Yellowstone Lake into the marina, where a little footbridge crosses a creek. Shortly after I joined the throng, she took off towards the bridge. 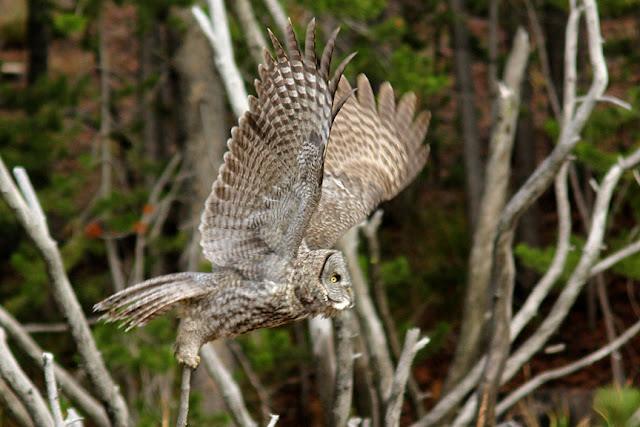 She sat, listening intently to the scurrying sounds of critters in the tall grass. 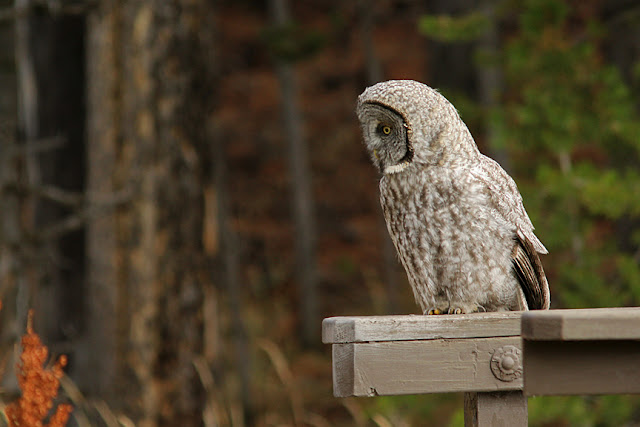 She dove into the grass, but she missed her prey and I missed getting a descent shot. But as she came up off the ground she landed in a tree so close to me I couldn't get her whole body in the frame. 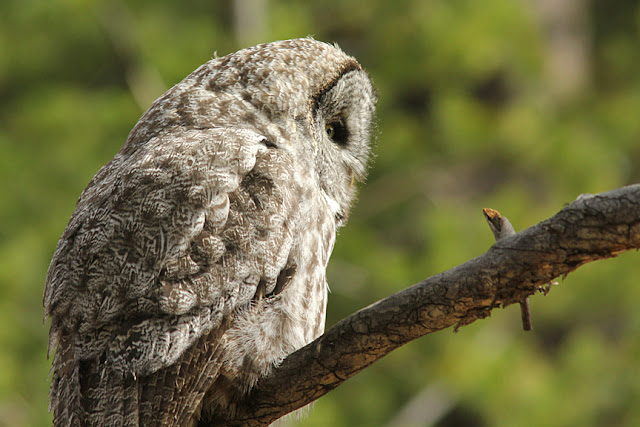 I eventually moved around the tree and stood on the shore to get a better angle, and to get a little farther away. I was concerned that we were scaring her prey, as she seemed not the slightest bit bothered by us. I imagine she'd seen a lot of people in her time. 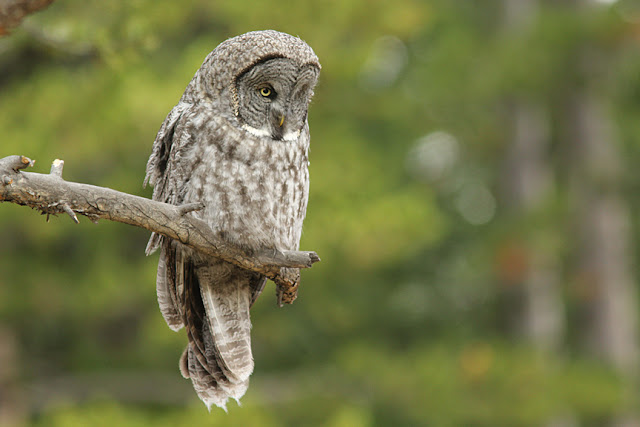 Oh such a disapproving stare these owls have! 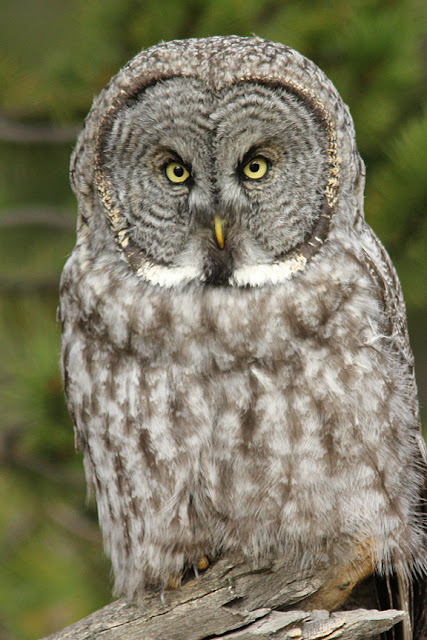 She eventually took off, heading across the entrance road and disappearing into the woods. The throng left with her, and we found ourselves alone by the lake. 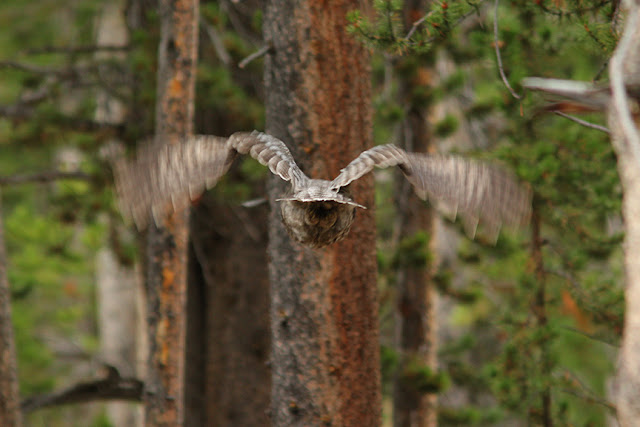 We decided to stay there and have a picnic lunch as the sky began to clear and the sun shone. We watched some ducks on the lake, then, while packing up our food, Lisa spotted the owl, or perhaps a second one, fly directly behind me and land in a tree over my head. By the time I got my camera, it had flown over to the little footbridge.

This time, however, there was no one else there, just us and the owl. It was oh so special. The sun shone and lit up those bright yellow eyes.

I was struck, from this angle, how incredibly well camouflaged this bird is. If not for the shadows, he would blend right in. 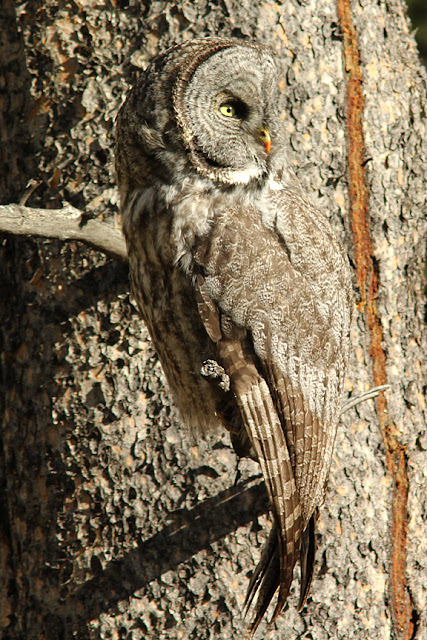 I should not have worried about being a bother to this bird. As we stood and watched, he began to preen.

He turned around on his perch to face the sun and the wind, and continued to preen. 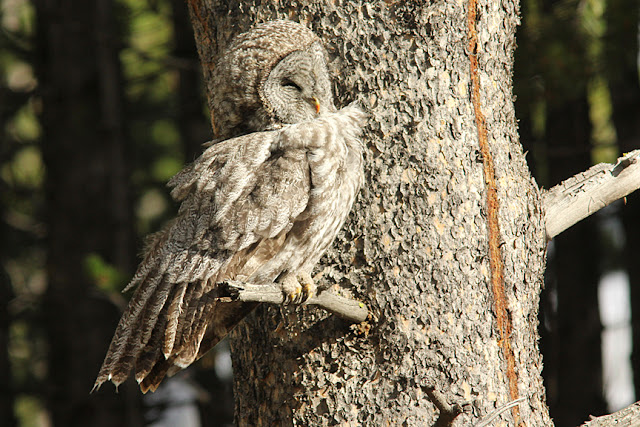 We moved around to face him, and watched as he cleaned his toes and feathers, did some stretches and rearranged his feathers. 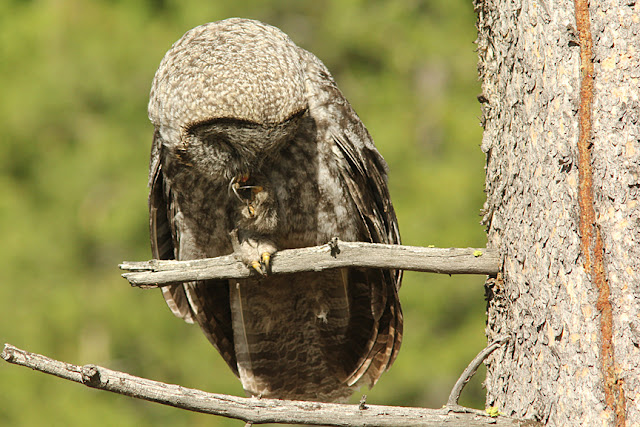 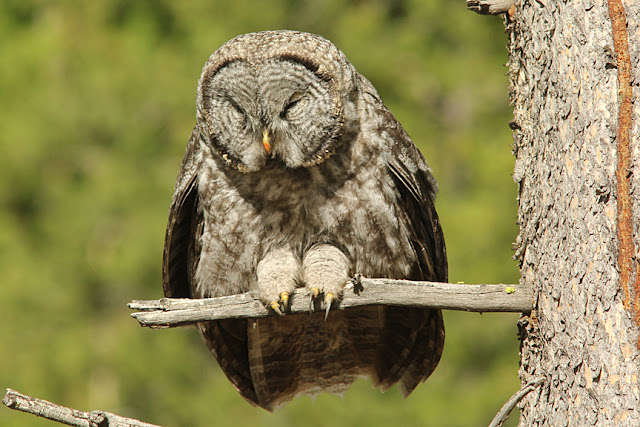 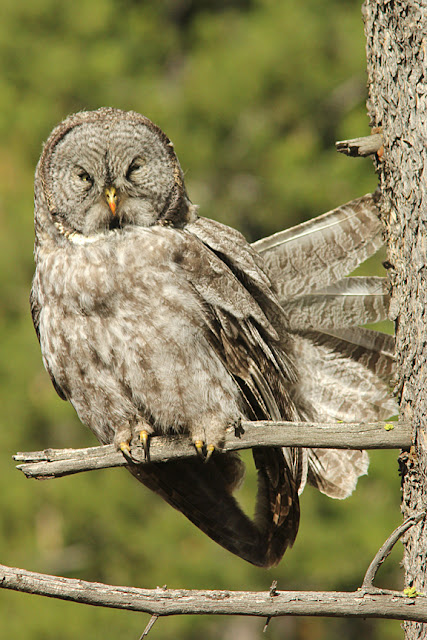 It is such a privilege just to be able to see a bird this close, but to have the opportunity to watch it do it's thing is even more amazing. 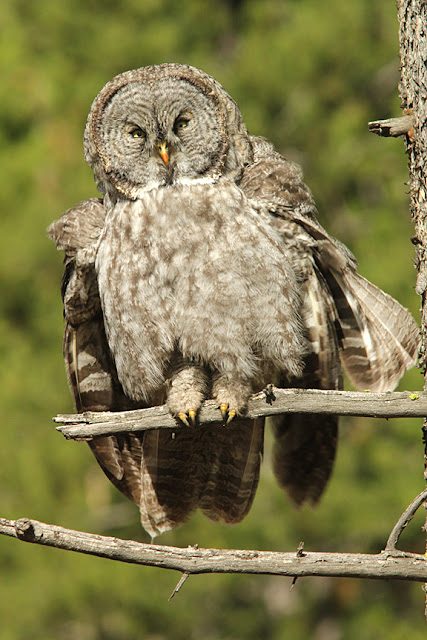 After his bath he took to the air. I'm not sure, but I think I may have wept. 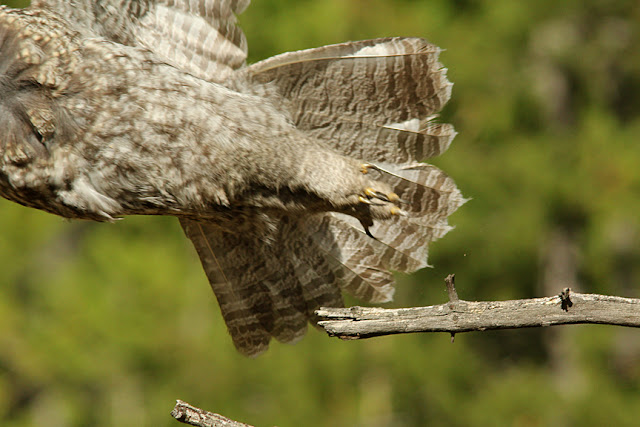 On our way out of the marina, we were treated to one more look at him. He had perched in a tree along the entrance, and as we watched he swooped down to the ground after some critter. I believe he came up empty taloned, but from the blood on his beak I think he didn't miss often. 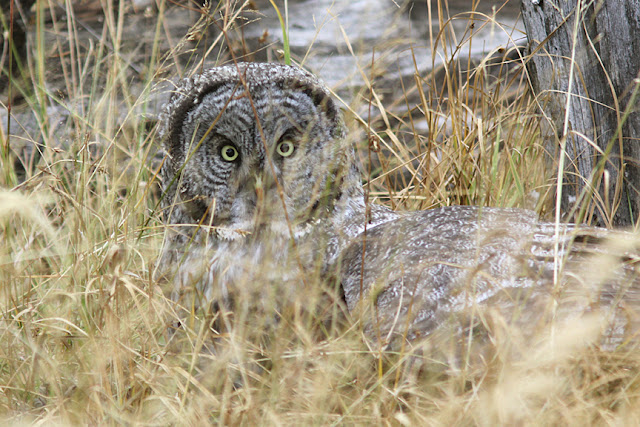