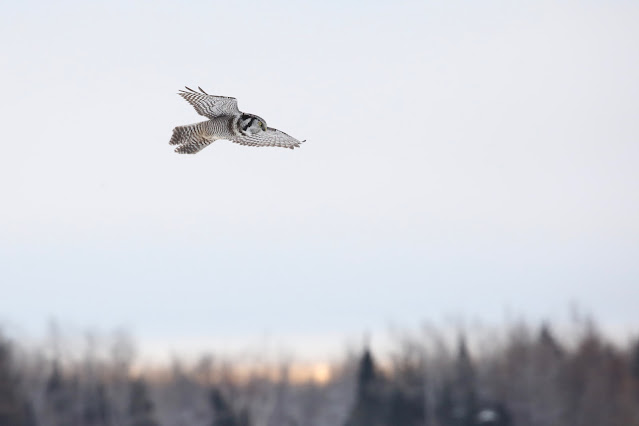 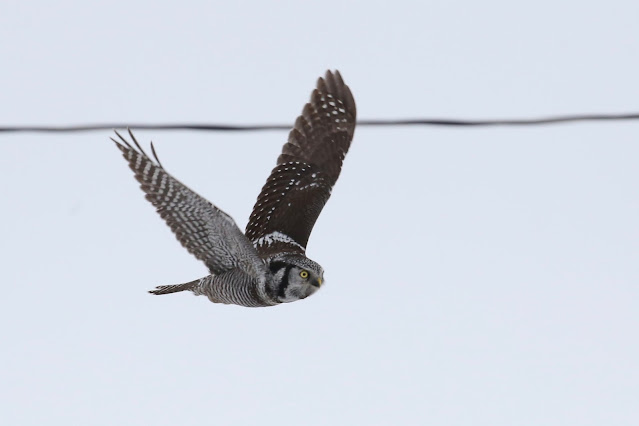 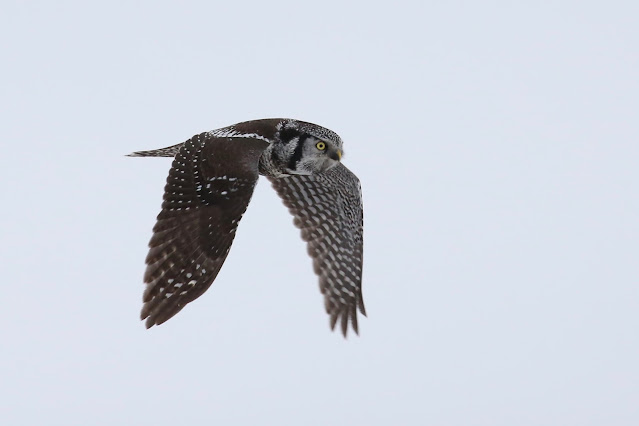 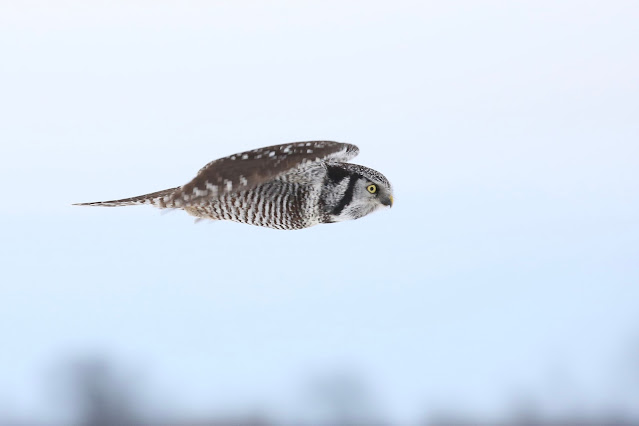 The owl seemed content on its perch behind the house so the others began to leave. As I made my way back to my car I noticed Terry's orange Subaru coming down the road. I smiled and pointed towards the bird. He pulled up and got out, and we stood on the side of the road chatting a while, talking about the year we'd had and how it seemed so weird that it was almost over. I would have loved to have hung out, maybe get lunch somewhere and share stories, but I still had business to attend to, so I got myself on the road and made it to the trailhead before noon. 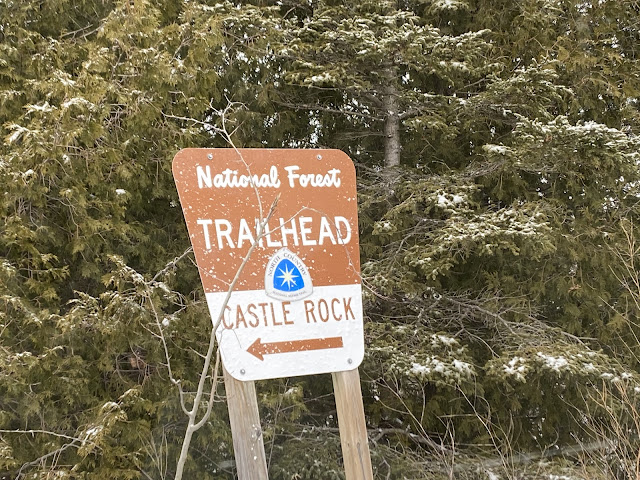 I changed out of my heavy winter clothes for lighter hiking gear and put my microspikes on my boots to help with the snow (only about 3-4 inches but enough to mess with my footing). I had boots on the trail after a quick lunch in the car. 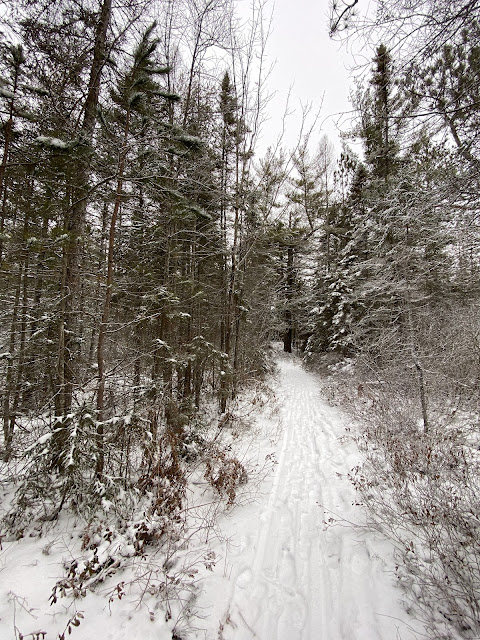 It had snowed the day before, then it either warmed up and melted the surface just a bit or there was some freezing rain because everything had the thinnest crust of ice on it. The snow had stuck to everything and it looked like a winter wonderland. 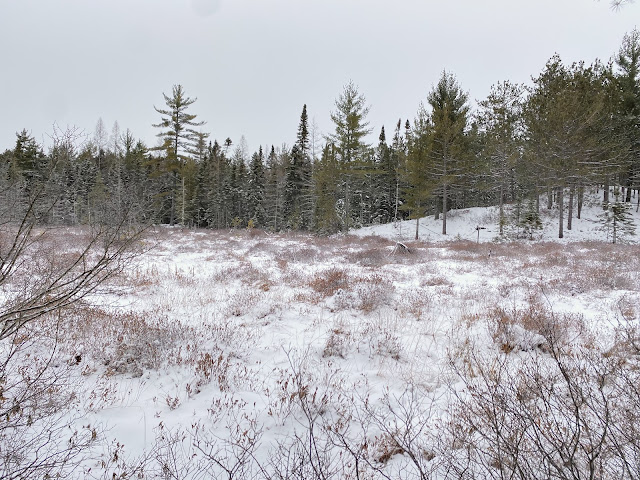 I hiked to the north and west, away from the section that's on a rail trail. It would be easy hiking but in winter it is also a snowmobile trail, and I detest snowmobiles, so I took the harder route in favor of peace and quiet--and I'm so glad I did.
There were multiple sets of footprints at the beginning, but within a half mile all but one set split off, and those tracks were both coming and going, meaning I'd likely be alone on the trail.
The forests in the U.P. are different than those here at home. The forests in our area are generally mixed hardwood/coniferous, dominated by oaks but also containing red and white pine, hemlock, aspen, maple, and some beech and birch. But in the southern U.P. you're on the edge of the boreal forest, and the make up is different. There's still red and white pine, but the aspen, hemlock, beech and birch are more dominant, oaks are replaced by black spruce and balsam fir, and while still a mixed forest it's decidedly conifer-based.
The terrain rolled and I passed through wooded uplands and along boggy lowlands. A light snow began to fall, hardly a flurry but enough to add to the scene. I heard White-winged Crossbills in the spruce but they would scatter before I got a glimpse. About a mile from the trailhead the other tracks stopped and turned around, and I was left with fresh, unbroken snow. 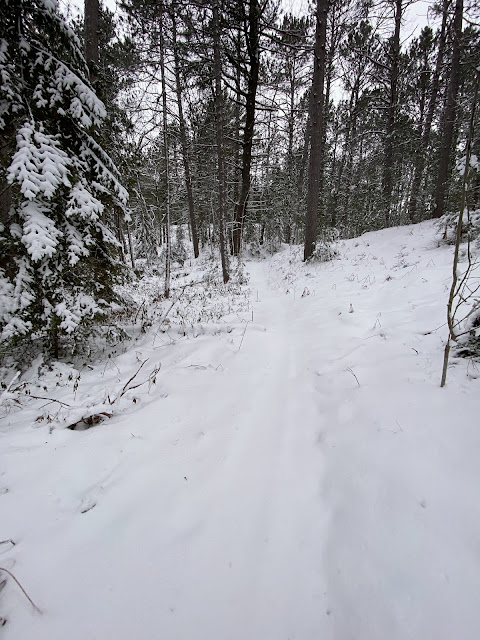 With the human and dog tracks gone other things began to stand out. I could see a lot of snowshoe hare tracks, most of which were on top of that thin crust of ice, their impressions fresh yet barely visible in the dusting of snow on top. 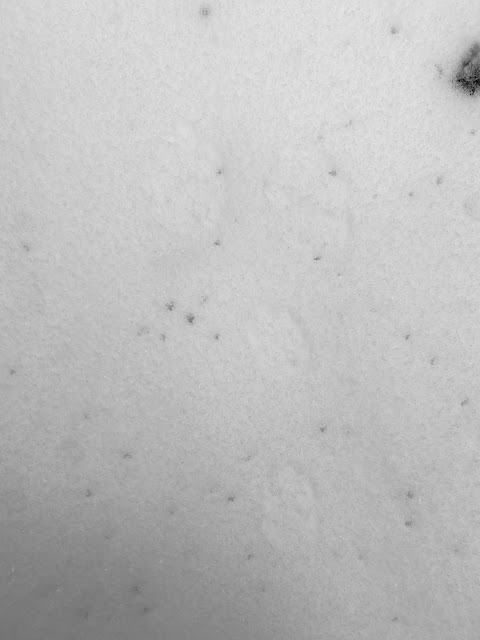 Grouse tracks crisscrossed the trail too. Some were deep, made the day before when the snow was wet, and some clearly from that morning, also striding across that thin layer of ice. 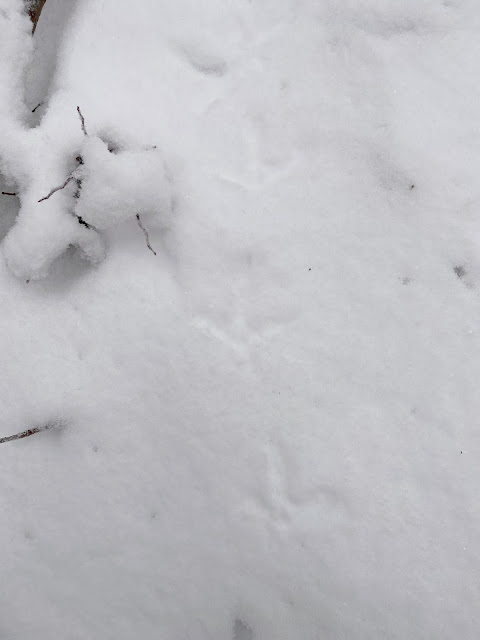 I don't know how long I'd been sharing the trail with a new set of tracks, but I realized at some point that there was another set of footprints. I stopped and looked down in amazement. No human made these--they were clearly canine. But these were not fox tracks. Not coyote, either. 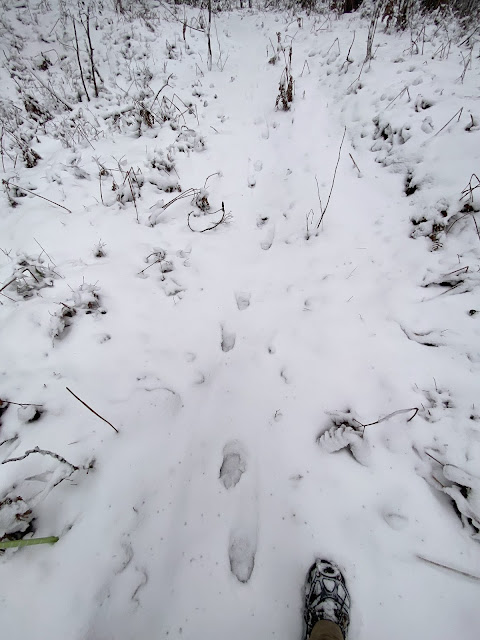 I bent down for a closer look, holding my hand beside one, and my hand and the track were nearly the same size.
This was the track of a wolf.
I will admit I found the idea of sharing the trail with a large predator a little...concerning. I know wolf attacks are rare, but being alone certainly makes me more of a target than if I were in a group--more of a target for anyone, really. I knew a healthy wolf would not be a threat, but if it were hungry, injured, starving...?
The tracks were going in the opposite direction, coming toward me down the trail, and were clearly from the day before based on how much snow was in the ones out in the open. I decided I was probably safe and pressed on. 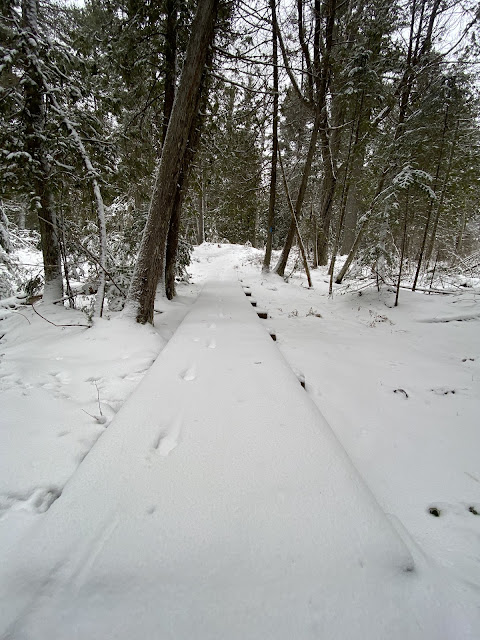 Another half mile or more in, the tracks changed. I looked down and realized that, in addition to the single set heading southeast, there was now a pair headed northwest, and they were pretty fresh--no snow piled in these tracks! 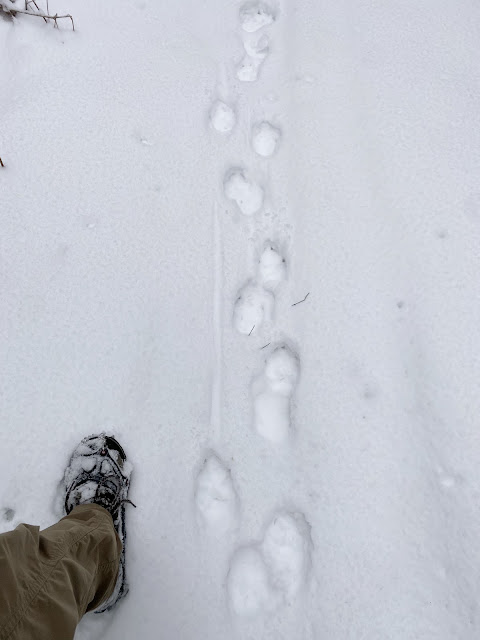 I stopped again and pondered. Lone wolf, old tacks, no problem. Two wolves, laying tracks within the past 12 hours? The past six? Two? That really gave me pause. There was clearly plenty of prey around considering how many hare and grouse tracks I'd seen, along with the occasional deer. And, again, I know wolf attacks on humans are virtually unheard of, though certainly not impossible. What to do?
Ultimately my desire to not head back and walk with the snowmobiles was greater than my trepidation, so I kept going. But as I walked I tried not to step in their tracks--it felt disrespectful somehow, almost sacrilegious, because while I was a bit nervous I was so excited to be in the company of wolves. 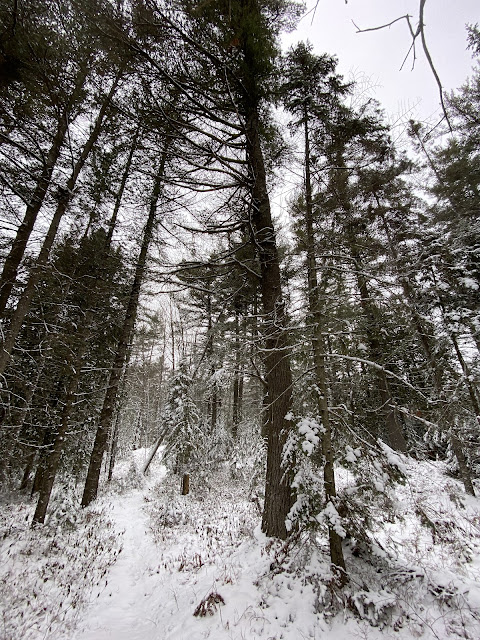 A narrative began running in my head of the naysayers, because part of me was not completely convinced by what I was seeing. No doubt some would claim this was just a coyote. How would I refute that? The size of the track, the length of the gait, the depth of the print indicating a heavy animal...?
As I'm thinking this I came upon a small spruce next to the trail surrounded by prints. I noticed urine on the snow and thought, "huh, that's not very high up for an animal as big as a wolf," and then I saw a few drops of blood. I realized this isn't the male marking his territory, this is the female, and she's in estrous. This means these two wolves are likely an alpha pair.
Still chewing on this bit of new information I came across another sign, and any doubt about whether these are really wolf tracks is blown away. There on the trail is the long scrape a canine makes after they deficate, like a dog kicking up grass in the yard, and next to it is a HUGE pile of scat. Now maybe if coyotes got to the size of wolves their poop would be that big, but I am utterly convinced now that these really are wolves. Short of seeing the actual wolf I have all the proof I need. I continue on, following the tracks that followed the trail deeper into the woods. The trail had been heading steadily north towards the edge of a ridge, and I could see the valley through the trees. But as the trail turned to the west, the pair of tracks kept going straight, over the hill and down the slope. The other, older set of tracks, the first one I'd found which had been mostly obscured by the newer tracks, were evident again, continuing on to my left. Within 20 feet they also disappeared down the slope (although when they'd been made the wolf was coming up the hill, not going down), and I was once again left with fresh, unbroken snow.
Partly because of my dawdling to take pictures and bird watch and partly because of the snow (which makes footing a bit tricky and slows my pace) I wasn't making good time. I'd only gone about 2.5 miles and it was past 1:30 already. I decided to hike until 2:00 then turn around. Two hours out and two hours back would normally net me about eight miles, but I'd be happy with six.
But as I pressed on that little voice in my head told me I should just turn back. I argued with it for a while but reminded myself that it somehow knows things I don't (which has been borne out with some bad experiences) so I decided to turn around and head back.
The snow began to increase from a few flakes drifting about to something more substantial. I stopped several times to take it all in--the silence, the smell of spruce and fir, the snow like fairy dust. It was such a change of pace from hiking downstate, and I was warm and comfortable, that I wished I didn't have to leave. It all felt utterly magical.
As I neared the end the snow stopped and the clouds broke some, giving views of blue sky and a few quick peeks of sun. 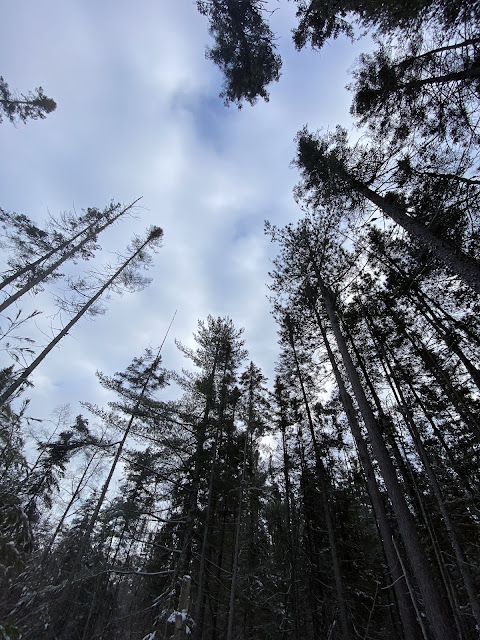 Back at the car, after logging just under six miles, I decided that was close enough. I knew I'd have boots on the trail for a short hike the next day for my local Christmas Bird Count, and with the variances of the different tracking apps I concluded that I was close enough to 100 miles to call it good, and vowed in 2022 that I would not wait until the literal last minute to finish. (I am thinking about hiking/backpacking the NCT through the entirety of the Manistee National Forest, so that would get me to my goal.) 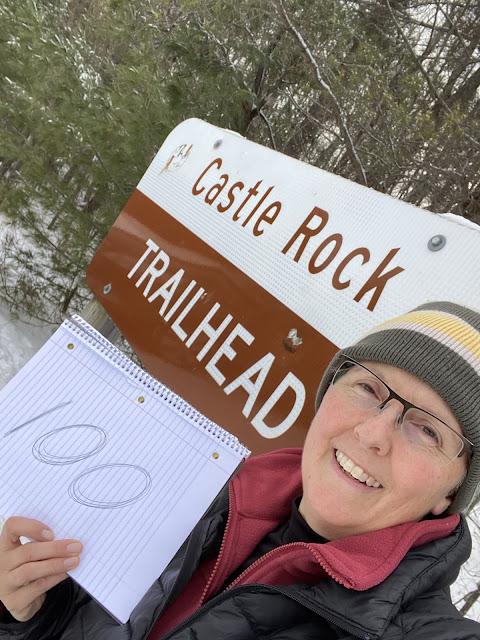 My drive home was uneventful. The sun peeped through the clouds as I passed back over the bridge, bringing the day full circle. The drive gave me time to reflect on not just the day but the whole year. What an amazing experience it's been, testing my resolve, by birding skills, and my competitive nature. It reinforced for me that while I like to do well, I don't have to be first--that I need more balance than that. I'm happy to have finished in the top five--and I have a screen shot of the eBird standings to prove that, for just a couple days in June, I was on the top of the heap. That's good enough for me.
I also realized that the year had ended almost exactly as it started, standing in the snow, chatting with Terry and watching owls. I didn't know him before January 3rd, 2021, and our chance meeting on a lonely country road on a dim afternoon in winter at the start of both our Big Year attempts kicked off a friendly competition that pushed both of us to achieve more than we thought we would. For it to end with us together again, purely by chance, nearly a year later, talking about birds and reflecting on what we'd accomplished, was some sort of kismet.
Neither of us realized it at that moment, and honestly I think that's best. There were no celebratory selfies, no high fives, just talk of birds, a bit of joy at ending the journey with such a great species, and a shared sense of accomplishment and a bit of relief that it was over. The significance of moments like these are often only seen in hindsight, leaving the moment itself pure in its ignorance of the significance of it. We can look back at all of it and marvel at what we've done, the friends we've made, and how each of our journeys really did come full circle. 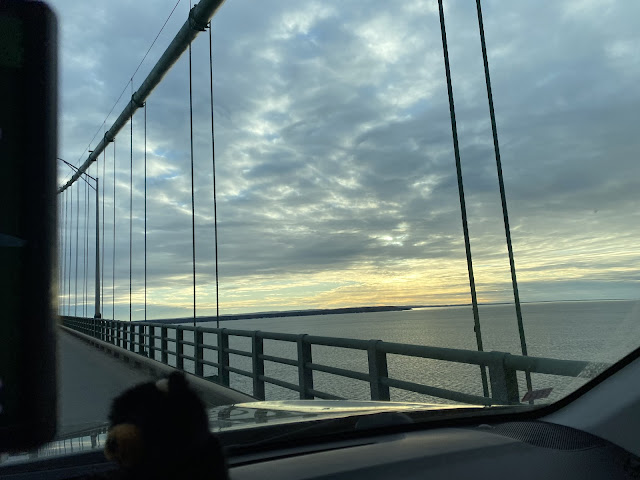 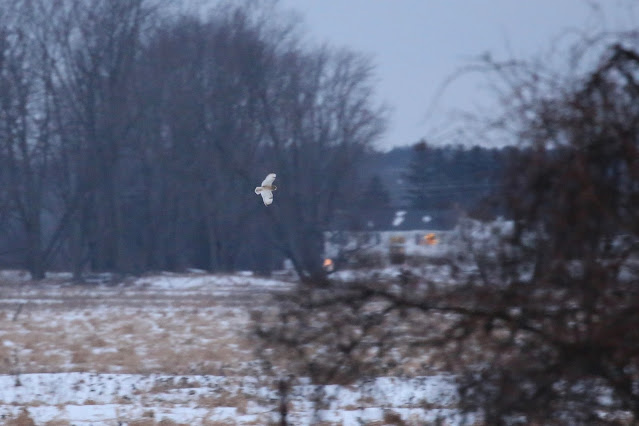 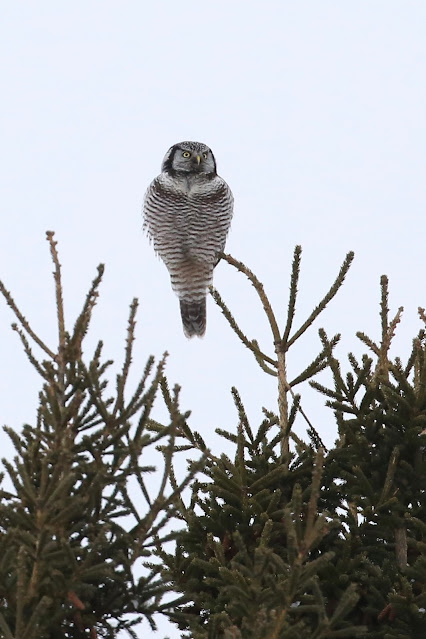