The Dance of the Sharp-tailed Grouse--MBY Vol 11

In the two weeks after our U.P. trip I spent some time driving around west and central Michigan, picking up birds here and there: Greater White-fronted Geese in Montegue; a whole host of birds, including the previously dipped on Barrow's Goldeneye, in the Kalamazoo area; Cedar Waxwings along a paved trail on the Muskegon River in Big Rapids; my first Red-winged Blackbirds of the year at home on March 5th; a few new ducks and a Glaucous Gull at Muskegon Wastewater. Spring was springing, the snow melting and dripping and forming ice all over our driveway and sidewalks. I spent a lot of time roof raking and salting and putting sand on the icy driveway. But in spite of adding all those birds to my list, I was itching to get back to the U.P.

For me, one of the biggest limitations of doing a Big Year is being able to be in a given location at dawn. Birds are most active at sunrise and for a few hours after as they are breaking their fast, so to have the best chance of seeing and/or hearing a bird, you've gotta be out at dawn. On our first trip to the U.P. we were twice in the Rudyard area around 1:00 in the afternoon--perhaps the worst time to bird--and did not see any grouse, or hardly any birds at all. So I planned another trip north in early March. Here's the tale:

After dipping on the Sharp-tailed Grouse on our last trip to the U.P., someone posted photos of five or six grouse on a lek in the eastern U.P. (A lek is a patch of seemingly random turf where male grouse compete for the attention of--and the ability to breed with--the females.) I had no idea they would be on their leks so early, and Lisa and I almost went up the next day. But getting up there early enough to see the birds on their lek would mean getting to the area by sunrise, and that meant, if we left from home, getting up at 3 am. We were going to do it, had all our stuff ready to go, when I decided at 10:30 pm that I really didn't want to be driving at four in the morning. Plus, I want birding to be fun, not torturous. So I checked the weather and picked a day to go up and stay overnight in the area, knowing we had some time because the birds are on their lek for many weeks.

We got up around 6 am, showered, had breakfast, and started loading the truck--we did still want to get up to the Whitefish Point area and make an attempt at a Spruce Grouse. Around 7 am, in the still dim morning, our beagle Bailey stood at the sliding glass door, grumbling. I went to look, expecting to see the feral cat who lives in the area but was stunned to see a beautiful Barred Owl sitting on one of the bird feeder posts! Of course my camera was already in the truck, so I was left having to take some craptastic photos with my cell phone.

We got on the road by 8:15 am and had a lovely drive. It was chilly, in the 20's all day, but it was sunny and not too windy. We drove up to Whitefish Point to have a look around. The beach was like a moonscape and studded with the cones of ice volcanos. These form over shallow water just off the beach by waves getting forced under the ice and then erupting through holes. The cone forms as the water and ice bits rain down around the hole, slowly building. But the breeze was easterly, not onshore, so no water was erupting from them. It's even possible they were by now cut off by the ice expanding out into the bay, but they were still cool to see.

Cold air holds little moisture and allows for the remarkable blues of a northern winter sky. Contrast that with the whites of the lighthouse it nearly makes me weep.

We paid a visit to some friends who live just south of the point who do owl banding there every spring (and yes, I'll be going back!) and they gave us some tips on where to look for Spruce Grouse, another northern Michigan target bird. We drove some backroads but with all the snowmobiles (we were there on a Sunday on what was likely to be the last good snowmobiling weekend) there were no Spruce Grouse about. We did have one heart-stopping moment when a grouse flew across the road in front of us, but I could tell by its tail that it was a Ruffed.

So we made our way eastward toward our hotel in Sault Ste. Marie, stopping along the bay to see the sights, like the Point Iroquois Light Station. 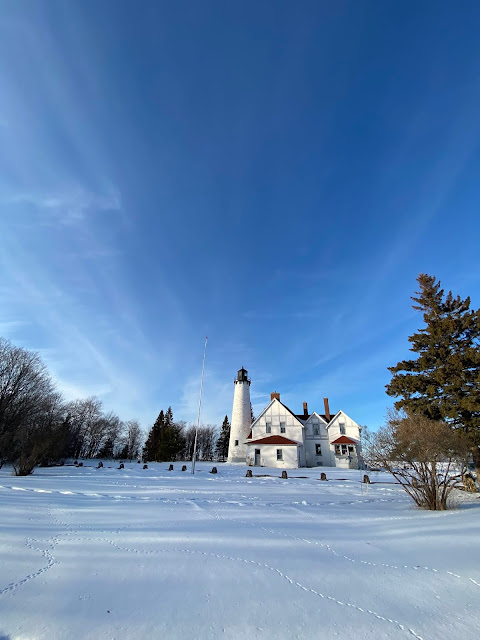 The lek where the grouse had been photographed earlier this week was about a half hour south of the Soo, so to be in the area at sunrise we still had to get up at 5:30 am so we could reload the truck and make the drive in time. We arrived pre-dawn and started creeping along the secondary roads as we made our way to M-48. The lek was on M-48 a mile east of I-75, but the woman who had seen them apparently does not use eBird, which would have given us a precise location, so I had to rely on her sense of direction and distance.

We reached east-bound M-48 about 15 minutes before sunrise and drove slowly along. Fortunately it's a pretty desolate area, mostly farm fields, so I wasn't holding anyone up. The photos I'd seen showed the birds out in the open, displaying. Against the still snow-covered fields they should have been obvious, but we saw no birds.

Not wanting to dip again, especially after incurring the expense of a hotel, I had to decide if we would drive up and down M-48 and hope to spot them, or to head back north to check out one of the several locations where they had been seen the day before. I really wanted to see the males on their lek doing their display, but the more important thing this trip was just to see one, any one, so I decided that the smart thing to do was to head to one of the other locations (a couple are at homes with bird feeders, so fairly reliable), check the bird off the list, then come back down to M-48 and try again for a lek before it got too late. So we continued east down the highway but I picked up the pace.

A mile or two later there was a flash of something flying across the road, something gray and white and round with fast wingbeats. I hit the brakes and pointed.

"There!!" I shouted as the bird flew into a small copse of trees in the middle of a field and alighted on a branch. "That's it!"

I pulled the truck off the road as Lisa called out that a second one was coming in. By the time I got my camera set up there was a third.

While I messed with my camera settings (it was still fairly dark and I was trying to get a decent exposure) four more birds flew in, for a total of seven. 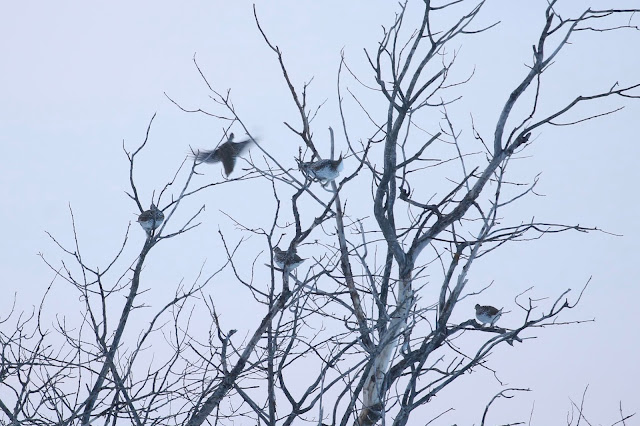 Then one by one they fluttered to the ground and started, well, grousing. 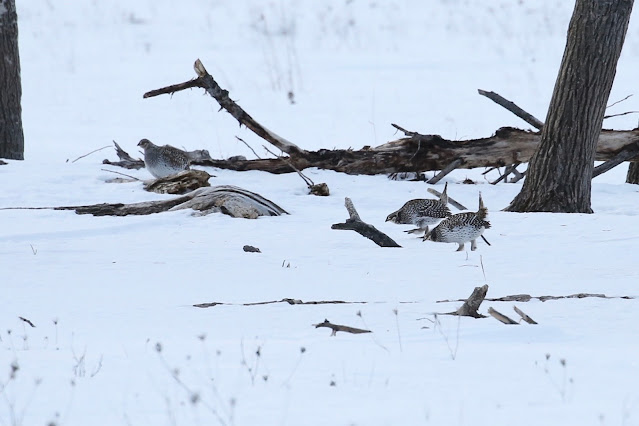 I began shooting and hoped for the best. The lek was perhaps 50-70 yards from the road, so my 400mm didn't have quite enough reach, and it was still pretty dark, but I didn't care. Watching these birds zip back and forth, tails high, wings low and scraping the snow, was such an amazing experience I would have been OK with no photos at all. 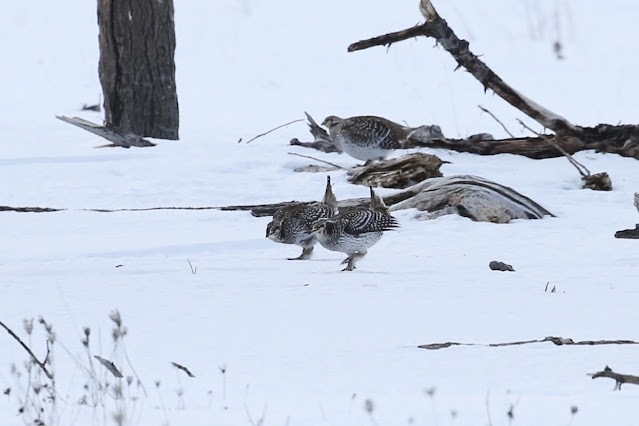 It's hard to know for sure but I think there were perhaps two females among them. The males would charge each other and face off, then more often than not lie down on the ground, facing each other. I did the best I could to capture the action, but it seemed like they were almost always behind something--a log, a branch, a snow drift. Still, I didn't care. What a privilege to see this in person. 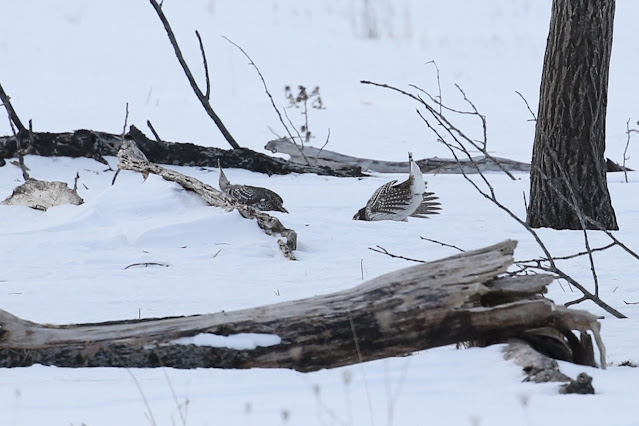 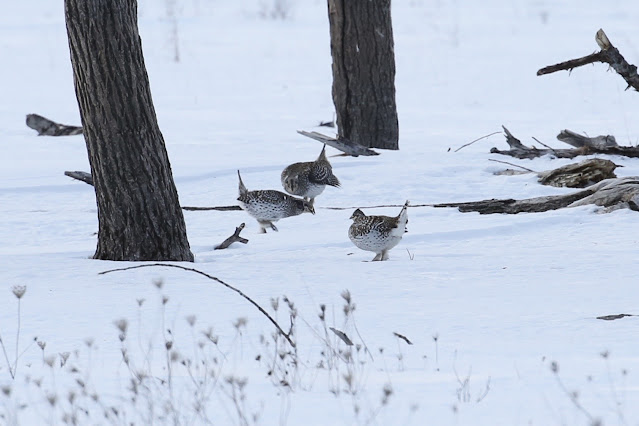 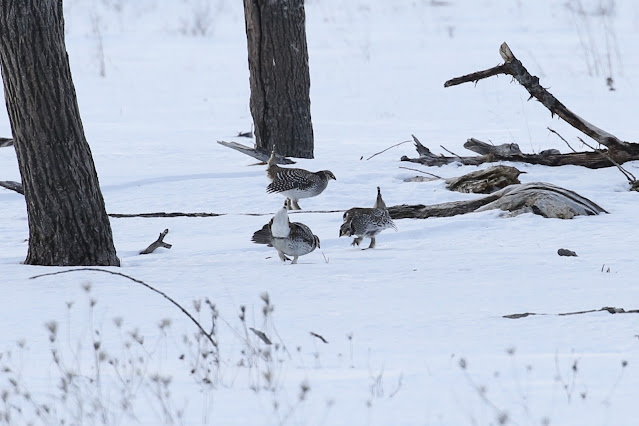 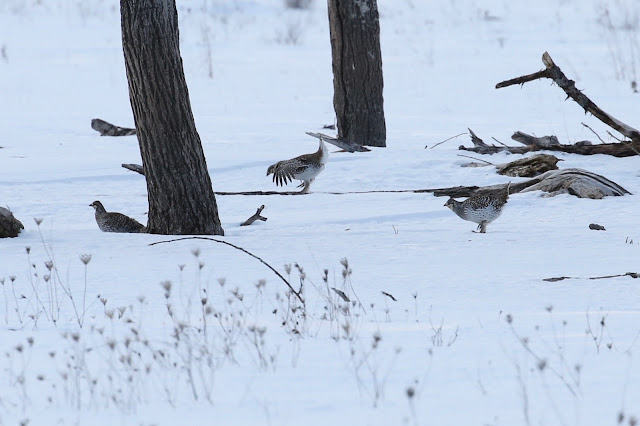 I could hear their grunts and squeaks so decided to try some video. I don't have an external microphone so the truck that drove by while I was filming is quite loud, but the video is so much better at capturing these birds than a photo could. We've messed with the audio a bit so it's a little inconsistent (a truck drove by early on) but I am totally an amateur videographer (hell, I'm not even at that level). You can, however, hear the grouse, which I think is totally cool. You can also see, if you watch carefully, the males shaking their name-sake sharp tail. I've uploaded the video to Lisa's YouTube channel and linked to it here (while you're there you should totally check out some of her woodturning videos):  https://www.youtube.com/watch?v=lokIK980cb0

I may get myself some video gear (starting with a directional microphone) and play around with videography. Might even set up my own YouTube channel!